‘The Sandlot’ Cast Talk About Behind-The-Scenes, Ham Said Castmate Punched Him In The Face During Filming 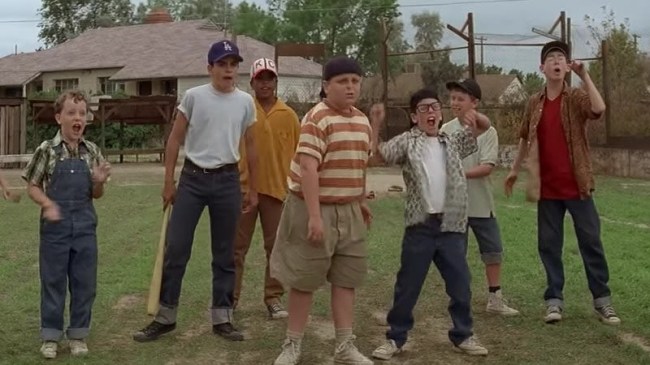 On Saturday, the cast of The Sandlot had a reunion at Dodger Stadium and threw out the first pitch before the game between the Dodgers and Giants. The cast of the beloved childhood movie also appeared on SportsCenter to give some behind-the-scenes details about the 1993 film.

ESPN’s Neil Everett asked the cast about the good times and the bad times of filming The Sandlot and Patrick Renna who played Hamilton ‘Ham’ Porter quickly spoke up. “Yeah, someone punched me in the face,” Porter said. “And he’s not here.” As the cast bust into laughter. “We’ll just leave it at that,” Ham continued. “He clocked me right in the face.”

Also during the interview Chauncey Leopardi, who played Squints, was asked about Wendy Peffercorn, who he was able to steal a kiss from the lifeguard, and he said, “She’s amazing, she’s really busy.” It took years of planning for Squints to pull off that stunt. There’s heroes and there’s legends. Heroes get remembered but legends never die, follow your heart kid, and you’ll never go wrong.