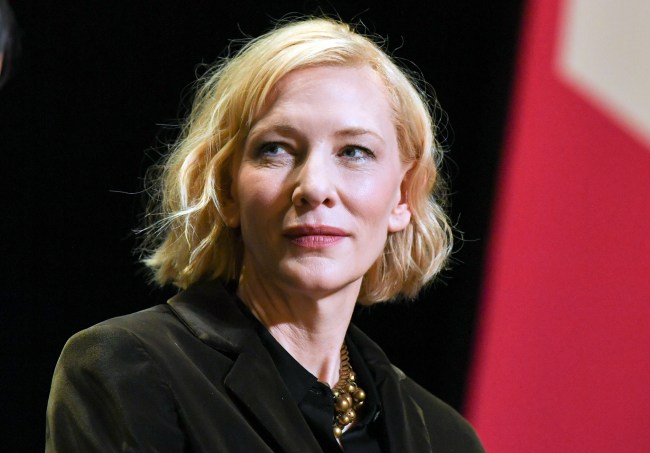 Cate Blanchett should not be anywhere near a chainsaw.  Isn’t that the point of making millions from movies? You can hire chainsaw guys while you stay inside with yoga toe spacers making your feet stronger. It has nothing to do with her being a woman, grow up. Everything to do with how good she is at acting. I wouldn’t want Daniel Day Lewis working with a chainsaw either. She’s got six oscar nominations, two wins. Have you seen Babel? Lord of the Rings? Good God almighty what a career. And I haven’t even seen her best stuff, like Blue Jasmine, Carol, and Elizabeth. Can’t handle that sort of thing unless I’m on a plane. But Cate Blanchett is class personified. Here’s the story:

NY Post– “I had a bit of a chainsaw accident yesterday which sounds very, very exciting but it wasn’t,” Blanchett, 51, said on “A Podcast of One’s Own with Julia Gillard.”

“Apart from the little nick to my head, we’re fine,” Blanchett assured the host without revealing exactly what she was doing with the powerful tool.

A nick to your head?! The fridge is going on here?!!! Did she walk into the blade, or did it kick back when she started it? I’m guessing the latter. Chainsaws are bucking broncos if you don’t respect them. It may not be manly, but there’s no shame in putting your foot through the handle and starting that sucker on the ground.

All that said, I would have expected a bit more woodswoman wherewithal from Galadriel, Queen of the Elves. They live in the damn forest. Maybe she’s more skilled at the lute. I don’t know how jobs get broken down in her neighborhood.