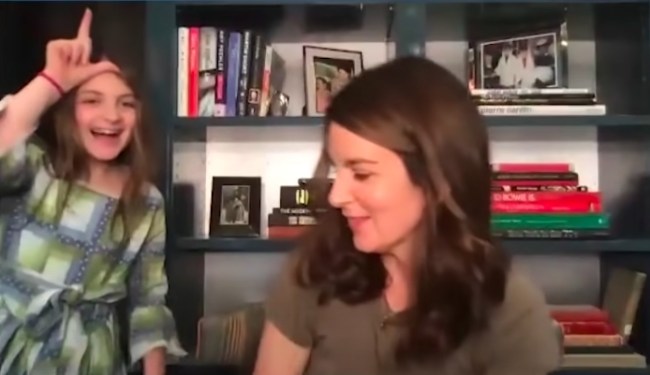 One of my favorite things about the past few months has been watching the television world attempt to handle the curveball thrown at it after suddenly being unable to broadcast from a studio. The go-to method has been using Zoom and other strategies to put out a product that at least kind of resembles what viewers have come to expect.

For some reason, I really enjoy getting to take a look at the homes so many rich and famous people have complained about being confined to. It’s always fun to see what they deem to be the best possible background for their live hit or interview. I’m personally partial to the scholarly approach of having a massive collection of books they probably haven’t read but also enjoy the “Whoops, is that an Emmy sitting in the background just over my shoulder? Golly, how did that get there?” strategy.

If you throw on most late-night shows, you’ll get to see some of the most inventive content that has popped up in years (although it’s worth noting inventive≠funny). However, there are still plenty of people who have stooped to lowering their buckets into the well of hackiness, and right now, the bit that sits atop the heap of cheap laughs is kids interrupting their parents.

To understand the origins of this phenomenon, we need to go all the way back to 2017. Remember then? We didn’t hate the Astros for winning the World Series yet, La La Land won the Academy Award for Best Picture but then lost it to Moonlight a few seconds later, and a total solar eclipse disappointed the masses who weren’t located directly in its path.

One other pop culture touchstone from that year was a viral video of Professor Robert Kelly doing an interview with BBC News. In the clip, he’s talking about the state of the Korean peninsula from what appears to be an extra bedroom when his kids decide to barge in.

The video is pretty great because there are so many layers to it. There’s more to break down here than there is in the Zapruder film.

Kid Number One gets things started by just making herself at home before getting a subtle stiff arm from her old man. It gets better as Kid Number Two (who was too young to walk at the time) just barges in as well, followed by her frantic mother. The extraction of the kids couldn’t have gone much worse. She was hoping for a swift Showtime At The Apollo-style hook removal but instead wound up with an exit that was about as smooth as 60-grit sandpaper.

All you have to do is throw a “Yakety Sax” over the video and you’ve got yourself an instant Benny Hill sketch.

The incident absolutely blew up and was the internet’s favorite viral video du jour for a number of days, and three years later, we now have a rash of similar content that’s trying to recapture the glory of the original to no real avail.

One offender was Tina Fey, whose daughter crashed an interview during an episode of Late Night With Seth Meyers.

She handled it well…almost too well. It felt like it was a bit that stemmed from a segment producer telling her, “Y’know what would be funny? If one of your kids interrupted the interview” right before it began.

Next, we have Adam Sandler, who switched up the formula and started his interview on Jimmy Kimmel Live! with his daughter present.

The Sandman gets a bit of a pass because it’s undeniable that this was set up, but at the same time, it still reeks of being staged; a pre-meditated interruption in the first degree.

There was also Drew Barrymore during an interview with CNN’s Chloe Melas. This time it was less about comedic timing and more about showing that celebrities are definitely, totally just like us.

Most people would be able to thwart the possibility of something like this by simply telling their kids in advance that they need a couple of minutes of peace and quiet so they can chat with another famous (or at least semi-famous) person. Have them park themselves in front of the TV, tell them not to stick anything into a power outlet, and in the event of a real emergency—perhaps a burglary or the spontaneous combustion of a sibling—call 911.

There’s always this drive to create content that’s #Relatable because that’s what tends to go viral. I get that basically every parent has had a kid barge in on them during an inopportune time but these transparent attempts at trying to break the internet simply ain’t it.

Is there anything worse than a viral moment that was specifically engineered to be a viral moment? It’s like that time Ellen Degeneres took a break from dancing in the audience and (allegedly) being a tyrant toward her staffers to snap a selfie with some A-listers during the Oscars. It was so huge that people’s Samsung phones started exploding (I think that’s how it all went down but it was a while ago so I could be wrong).

At the core, it’s the kind of comedy that makes your mom or your aunt crack up and clap like seals, which is objectively the worst kind of comedy.

I will say I don’t blame Drew Barrymore as much as everyone else, as her moment was really reverse-engineered by the folks at CNN. The interruption was almost certainly real (the giveaway is that it wasn’t funny, poignant, or even remotely interesting) but it probably should’ve been left on the cutting room floor as opposed to being how the interview kicked off.

If this had been cooked up ahead of time, I would assume that she would’ve come up with something a little more compelling based on the fact that she’s been in what people in the biz refer to as “the biz” for so long. I don’t know if she could’ve dreamed up a way to elicit a hearty chuckle but I think she could’ve at least come up with a way to make people do one of those laughs where you exhale a burst of air through your nose.

Until the television returns to some form of normalcy, I can only assume the industry’s new favorite hack bit will continue. All we can try to do is raise awareness of this scourge and make others aware of this scourge of #Relatability so that they too can join us in fighting this level of monumental television hackitude.