U.K. Celebs Are Getting Fat For A Sumo Wrestling Reality Show And It Needs To Come To America A.S.A.P. 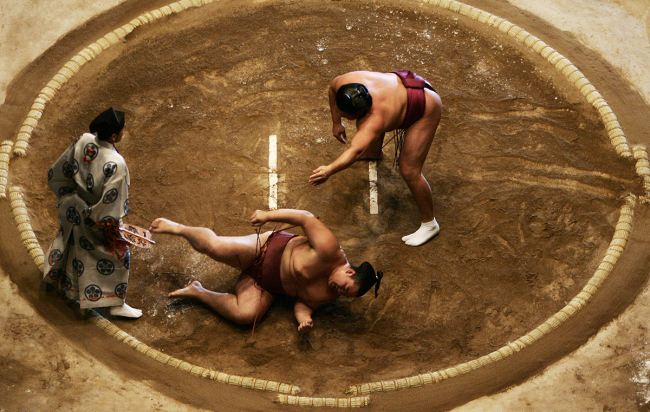 If there’s one thing the United States is unquestionably better at doing than any other country in the world, it’s stealing ideas for television shows from countries around the world, and there’s no place America loves jacking concepts from more than the United Kingdom.

The entertainment industry has a pretty rocky track record when it comes to adapting sitcoms from across the pond, and while The Office is one of the only really notable success stories on the fictional front, producers have a much higher batting average when it comes to reality television, as hits like American Idol, Dancing With the Stars, and Who Wants to Be A Millionaire? can all trace their roots back to Britain.

There’s no telling what the next program to make the leap will be, but earlier this month, a new show jumped to the top of my wishlist after I discovered the existence of All-Star Sumo, a new unscripted series that’s currently in the works at Channel 4. I don’t know if they’ve even started filming yet, but I don’t need to see a single second to know this needs to arrive in America as soon as humanly possible.

Based on sources familiar with the current plan, a group of British celebrities will be invited to live and train in a facility constructed for the show, where they’ll spend their days loading up on calories and packing on the pounds while training in the art of the Japanese sport before facing off against each other in the ring.

Who would watch this? Um, who wouldn’t watch this? I don’t care if the lineup of “celebrities” makes the people who were featured on VH1 dating shows look like A-listers; you’re lying to yourself and everyone else if you say you wouldn’t tune in.

When I first stumbled across the concept, I sort of assumed it would just feature famous people hopping into the sumo suits minor league baseball teams have long relied on to provide fans with entertainment in between innings. However, the fact that the people involved will be required to fatten themselves up in the name of reality television is the kind of shameless gluttony I have an undying appetite for.

There’s been a huge spike in popularity in celebrity boxing ever since Jake Paul sent Nate Robinson into another dimension to provide the internet with an endless amount of entertainment, and Aaron Carter and Lamar Odom are currently preparing for a bout of their own.

In a world where people love nothing more than to challenge others to fight them on social media behind the safety of their keyboard, it’s been incredibly refreshing to see more and more foes actually hit each other with body shots as opposed to spending their days firing shots at each other on Instagram. As a result, television executives in America need to prepare to bring celebrity sumo wrestling to the masses based on how incredible the concept sounds.

Of course, the boxing purists who refuse to acknowledge the truth of the prophecy Joe Rogan issued almost 15 years ago aren’t exactly thrilled with this trend, but as far as I’m concerned, it’s one of the best things to happen to the sport in ages. I’m sure celebrity sumo wrestling will spark more than a few thinkpieces that use the word “appropriation” too many times, but I can’t think of a better way to help raise its profile outside of Japan.

This would be even bigger than the showdown between Asashoryu and Kotonowaka in 2004 that I’m sure everyone reading this is intimately familiar with. A show like this could do for sumo what The Queen’s Gambit did for chess: make people get really into it for a week before forgetting about it almost entirely.

But what a week that would be! It’s a phenomenon akin to the “Winter Olympic Curling Effect” we see every four years; you know, where everyone and their mother become die-hard curling aficionados until every ounce of knowledge is cleared from our minds like it was swept away by Canadian curling icon Ben Hebert.

You also know there would be no shortage of celebrities lining up to train and consume aorta-clogging diets in an attempt to rejuvenate their careers. Would it actually work out that way? Of course not! There’s a zero percent chance a movie executive is going to ever utter the words, “You know who would be perfect for this role? The guy from that celebrity sumo wrestling show.” However, let’s try to make sure no one tells Steven Seagal that’s the case, because you know he’d be first in line if he ever got the chance to sign up for an American version of All-Star Sumo.

I know there will also inevitably be some people who would accuse the show of being “exploitative” and “potentially dangerous” for participants. Those people would be right, but if a reality television program isn’t exploiting and endangering the people on it in some way, is it even reality television at all?

It’s also worth noting this wouldn’t be without some precedent, and ABC seems like a prime candidate when it comes to airing something like this. In 2013, the network was home to a show called Splash, a celebrity diving competition based on a Dutch show with the same concept. Over the course of filming, contestants were on the receiving end of a laundry list of injuries resulting from the festivities, ranging from concussions to a ruptured ear-drum. Any network that would take those sorts of safety risks would have no problem with a little sumo action on their watch.

Sadly, we’re probably years away from the American version of a celebrity sumo wrestling series gracing our television sets, as tradition dictates we have to wait until the United Kingdom’s version comes out before we can steal it. But I know when the day comes, I will be parked in front of the TV wearing my finest mawashi and cheering on Steven Seagal as he wrestles a former member of 98 Degrees.