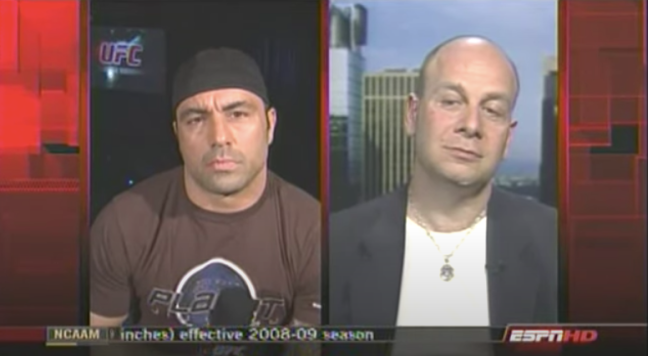 Whaddaya say we repurpose some content from the Joe Rogan Backwards Hat days, long before the UFC was valued at $4 billion and when Conor McGregor was still fighting at what appears to be an Irish Elk’s club.

A 2007 clip from an ESPN segment featuring Rogan and famed boxing promoter Lou DiBella is going viral as the two quip back and forth about the merits of MMA vs. boxing.

In the full 7-minute clip, Rogan called MMA a “much more exciting sport than any of the combat sports that are out there right now” and essentially called boxing one-dimensional MMA,  to which DiBella then diminished the sport to “human cock fighting” or “pitbull fighting.”

This will never get old pic.twitter.com/SUB0oVA68l

Rogan went on to become the biggest podcaster on the planet, secure a $100 million with Spotify, kill a bunch of elk, trip balls on some DMT, and continue his work with the ever-growing UFC.

DiBella was inducted into both the New York and Connecticut State Boxing Hall of Fames, owns the Tampa Bay Rays Baseball AA Southern League affiliate Montgomery Biscuits, and was a producer on the Academy Award-winning film The Fighter.

In 2017, DiBella walked back his criticism on MMA, saying he “got to get it a little more as a discipline” and doesn’t have any hate for the sport.

Both have moved beyond petty arguments on subjective matters. But the internet hasn’t!

We Comparing Peanuts to Gold plates

Tbh I actually love MMA but I gots to get my shots off when y'all come for my face sport too👿 pic.twitter.com/J0Sugva1ls

damn bro they still trying to get floyd the biggest fights all these years later, Joe was spitting fax

Even funnier watching this knowing that the Paul brothers are the boxing main events coming up 😂 https://t.co/vYU9IEX7M8

Boxing may not be the biggest thing on the playground anymore, but when former Bellator and ONE Welterweight Champion Ben Askren claims his upcoming fight with YouTuber Jake Paul will be the biggest payday of his career and Paige VanZant openly admitted that she could make more cash posting photos on Instagram than her UFC fights, it proves that MMA still has some ground to cover.