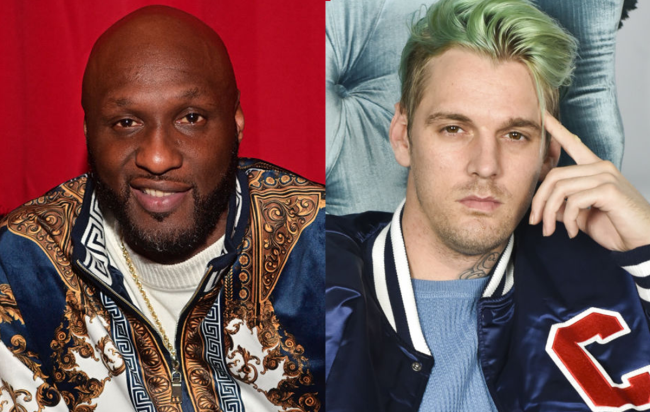 Based on everything that’s transpired over the past year or so, there’s virtually nothing that’s capable of surprising me anymore, as there are stories that would’ve once left me absolutely baffled that I simply take a glance at and think, “Sure, why not?” before moving on with my life.

For example, prior to the onset of our bizarre reality, I probably would’ve been incredibly confused to hear that Lamar Odom and Aaron Carter had agreed to face off in a boxing match, but by now, I’ve accepted that it’s just another instance of whoever’s in charge of overseeing the computer simulation we probably live in doing what they can to keep themselves amused.

According to TMZ, the world will be “treated” to a bout that will feature Lamar Odom and Aaron Carter going toe-to-toe in the ring in Atlantic City in a fight currently scheduled for June 12th, which I can only imagine the latter is getting a sizeable chunk of change to participate in when you consider his opponent is a 6’10” former professional athlete.

I’m going to have to dock the Matrixesque overlord who orchestrated this some points for a lack of originality, as it’s only been a few months since a former NBA player sparred with a noted douchebag who earned celebrity status by riding the coattails of their more famous older brother. In that case, Jake Paul put Nate Robinson to sleep to notch a victory for Team Nepotism, but I have a feeling the tables will be turned when the man who contributed to the soundtrack for the Jimmy Neutron movie faces off against a guy who played in the NBA for 14 seasons.

Prior to the announcement, Carter had been lobbying for a fight with Logan Paul and attempted to strike some fear into his heart by showcasing his training regimen on Instagram.

Odom has also been keeping busy, as he was filmed throwing some his punches of his own while sparring with a trainer last month.

After the fight was announced, Carter hopped on a live stream to discuss the showdown, where he smoked a cigarette before turning his attention to a bong, which is a fairly bold move for someone who’s gearing up for a scheduled three rounds against an ex-NBA player.

Is there any chance I actually tune in to watch this? Absolutely not. Will I repeatedly watch a clip of Carter getting knocked on the canvas if Odom manages to give him the same treatment Jake Paul gave Nate Robinson? You bet your ass.