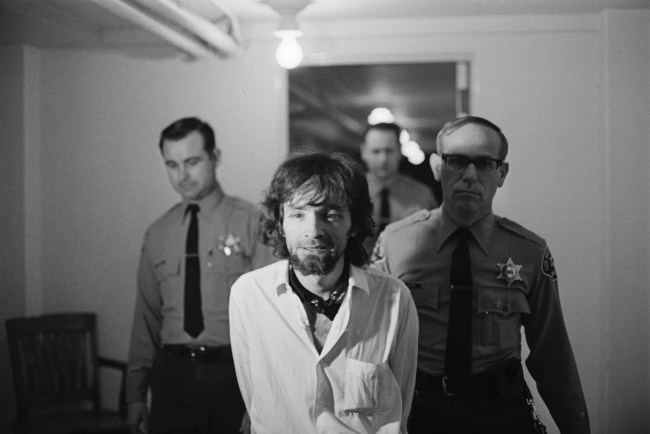 If the world was a just place, Charles Manson would die penniless and any money made off the likeness of the infamous serial killer should be given to the families of the seven people he killed.

But, that ain’t the case. There is a truckload to be made for music royalty rights as well as image and publishing rights (who knows what payday will come to the Manson estate from Tarantino’s ‘Once Upon A Time in Hollywood’ film).

Manson’s 2002 will claims that he authored over 100 songs, and at least two were commercially recorded.  These include a 1993 Guns N’ Roses recording of “Look at Your Game, Girl” and the 1969 Beach Boys song, “Never Learn Not to Love,” that was primarily written by Manson. [via Forbes]

Manson’s will left everything to Michael Channels, who became pen pals with Manson after sending him about 50 letters before meeting him in prison in 2002. Manson named Channels as his executor, authorizing his body to be released to Channels, and gifting all property to the weirdo. That same will disinherited anyone claiming to be a child of Manson and all other relatives, Forbes reports.

That poses a problem for Jason Freeman, who claims to be the son of Charles Manson, Jr., who changed his name and committed suicide in 1993. Freeman is aiming to become the administrator of the estate and the sole beneficiary of Manson’s estate, an estate that Freeman claims to be worth millions. In order to have a shot, the Estate has asked Freeman to take a DNA test to prove he is in fact related to the murderer but according to legal docs, he’s repeatedly refused. According to TMZ, the Estate is now asking a judge to order a DNA test.

Freeman is calling bullshit on Manson’s supposed handwritten will where he names Channels the sole beneficiary, but last year a handwriting expert claims to have compared the will with more than two dozen letters, envelopes, postcards and appeal forms with Manson’s signatures, and concluded that it was legit.

It will be interesting to see who ends up with the blood money.