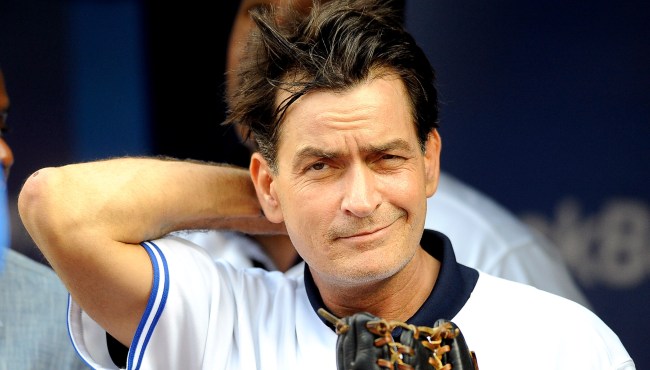 Here’s a fun fact for you: the very first tweet I ever gave a “Like” to on Twitter was when Charlie Sheen blasted out his most infamous phrase, “#WINNING”.

That was 10 years ago this week.

Since then I have “Liked” a plethora of other tweets, but the “Warlock” with “Adonis DNA” and “Tiger Blood” coarsing through his veins will always have a special place in my social media history.

As everyone above a certain age will certainly remember, Sheen imploded his very successful acting career when he decided to go off on the showrunner of his top-rated sitcom Two and a Half Men, Chuck Lorre, for… some reason. We’re still not 100 percent clear on why he did that.

Perhaps it had something to do with all of the drugs he was doing and the hookers and adult film stars he was sleeping with at the time.

Sheen went from being the highest-paid person in television, making $2 million an episode, to a Hollywood pariah, and now, 10 years later, he says he has many regrets.

“People have [said to] me, ‘Hey, man, that was so cool, that was so fun to watch. That was so cool to be a part of and support and all that energy and, you know, we stuck it to the man,” Sheen tells Yahoo Entertainment. “My thought behind that is, ‘Oh, yeah, great. I’m so glad that I traded early retirement for a f***ing hashtag.'”

Addressing some of his regrets from that time, Sheen says, “There was 55 different ways for me to handle that situation, and I chose number 56. And so, you know, I think the growth for me post-meltdown or melt forward or melt somewhere — however you want to label it — it has to start with absolute ownership of my role in all of it. And it was desperately juvenile.”

He’s right, but for those of us watching it all unfold from the outside, it was so dang fun.

“I think it was drugs or the residual effects of drugs … and it was also an ocean of stress and a volcano of disdain. It was all self-generated, you know,” Sheen says of what prompted the incident. “All I had to do was take a step back and say, ‘OK, let’s make a list. Let’s list, like, everything that’s cool in my life that’s going on right now. Let’s make a list of what’s not cool.’ You know what I’m saying? And the cool list was really full. The not cool list was, like, two things that could’ve been easily dismissed.”

He sums it up as, “I was getting loaded and my brain wasn’t working right.”

Don’t forget, when Sheen joined Twitter amid his meltdown, he set a record for being the quickest person to get one million followers at just 25 hours and 17 minutes, according to Lia Haberman, a social media instructor at UCLA Extension.

Sheen called all the attention he received on Twitter “overwhelming” and “a very public display of a mental health moment.”

And while he isn’t keen to relive those glory days, he doesn’t mind if others still revel in the complete circus that it was at the time.

“It’s all right if it still means something to them and, you know, I was the delivery device for them, then that’s fine,” says Sheen. “I just, I have absolute faith that the things I’m going to do professionally in Act 3 are going to put a muzzle on all that stuff and people can celebrate me again for what I actually do for a living.”

Check out the entire fascinating interview over at Yahoo.com.