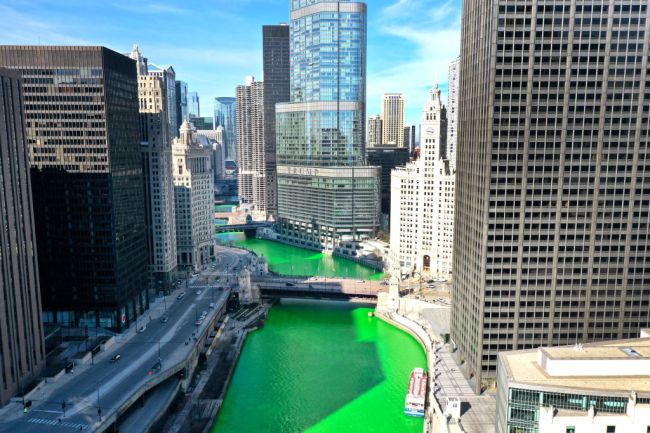 The city of Chicago pulled a fast one on its residents on Saturday morning. Mayor Lori Lightfoot and those involved with the traditional St. Patrick’s Day celebration had declared as recently as yesterday that the big parades were to be cancelled and the river would not undergo its transition to Kelly green due to COVID-19. However, the announcement turned out to be a smokescreen, and the famous river dyeing proceeded without confirming the exact time in efforts to reduce spectator gatherings. The first boat went out around 7:00 a.m. and the river was glistening green shortly thereafter. It’s such an awesome visual.

Video of the Chicago River being dyed for #StPatricksDay is mesmerizing pic.twitter.com/0E8PVtZqEr

The tradition dates back to 1962 and the story goes that plumbers in the 1960s used the green of the dye to keep track of where pollution seeped into the river. Upon seeing a worked coated in the leprechaun green after a day on the job, the union boss — who also organized Chicago’s St. Patrick’s Day parade — hatched a plan to turn the river green for the celebrations. Every year since, except for 2020’s coronavirus cancellation, the dyeing takes place between Columbus Drive and State Street, and it usually keeps the river green for a few days.

The 59-year tradition of dyeing the Chicago River green for St. Patrick's Day continued, while celebrations are planned on being toned down this year amid the pandemic.https://t.co/b4iIElX0C9 pic.twitter.com/kp5Q22VAhR

While the exact concoction of the dye is unknown, it is vegetable based and only requires about 40 pounds of powdered dye to transform the river into a celebratory color. The green river makes for some pretty amazing images of the Windy City.

Although we didn’t gather, we were able to honor long-standing tradition by dyeing the Chicago River green, thanks to the Chicago Journeymen Plumbers. If you're heading out today, make sure to mask up and watch your distance. pic.twitter.com/UfU2GI74nC

The fabric of modern America is woven through with the green of the Emerald Isle, and what better symbol of that than the 41st shade of green of the Chicago River. A hopeful green in 2021 pic.twitter.com/kbyfRvVtaX

After saying it wouldn't happen for the second year in a row due to Covid, surprise! They dyed the Chicago River green for #StPatricksDay ! pic.twitter.com/Z8ZHBoIfx1

A few more fun pictures from the surprise dying of the #Chicago River this morning for an early St. Patrick’s Day! #chicagoriver #ChicagoScanner #greenriver #chicagogreenriver Happy Weekend, everybody! ☘️ pic.twitter.com/nwd0hKHhhx

Surprise dying of the Chicago River improved my mood about having to go to the office today. pic.twitter.com/OIZS19qbA3

Here’s a #AToastTo getting back to tradition. Every year since 1962, the Chicago River has been dyed green for St. Patrick’s Day. After missing out on the ritual in 2020, the Chicago Plumbers Union Local 130 decided to give the city a surprise this morning. Sláinte, Chicago! pic.twitter.com/tx9yoYQYfY

IT’S GREEN!!!! Thank you to @ABC7Chicago Photographer Brian McMurray for sharing HIS VIEW of the dyeing of the Chicago River today! The TRADITION is back!!!! So exciting! I wanted to share these with you because I know many of you won’t be able to see it in person! pic.twitter.com/GyDvX53uRP

Saint Patrick’s Day is on Wednesday, and it will look different in Chicago for the second-straight year, but the dyeing of the river provides some sense of normalcy for a city that has been on lockdown for almost 365 days.