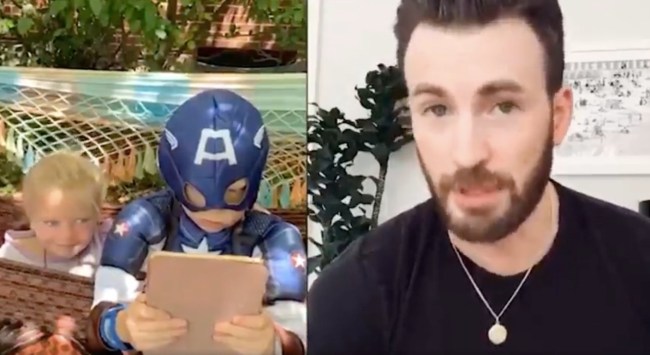 That Chris Evans — what can’t this guy do? Carry the biggest-ever movie franchise on your back for a decade? No sweat. Play an absolute prick in Knives Out? Check. A beaten-and-poor leader in Bong Joon-Ho’s Snowpiercer? Easy money. Sending a heartfelt message and authentic Captain America shield to a six-year-old boy who saved his sister from a dog attack? All in a day’s work.

According to the boy’s aunt — who posted about the incident on Instagram — six-year-old Bridger saved his sister’s life on July 9 after he stood in between her and a charging dog. Bridger’s aunt said that the heroic boy, who ended up receiving 90 stitches, later said, ‘If someone had to die, I thought it should be me.”

Captain America himself obviously took notice, as he wasted no time in sending Bridger a personalized message along with the promise of an authentic Captain America shield, which is likely as big as he is right now.

Just typical class from Evans, whose career will be fascinating to watch in the coming years as he enters the prime of his career without being contractually tied to the Marvel Cinematic Universe. If you’ve seen Snowpiercer, Gifted, Defending Jacob, or Knives Out (hell, his work in the MCU as well), then it’s blatantly obvious the man has the acting chops beyond just playing a square-jawed leading man. Currently, Evans is rumored to be starring in the upcoming adaption of Little Shop of Horrors and in the Scott Derrickson (Sinister, Doctor Strange) thriller Bermuda Triangle.