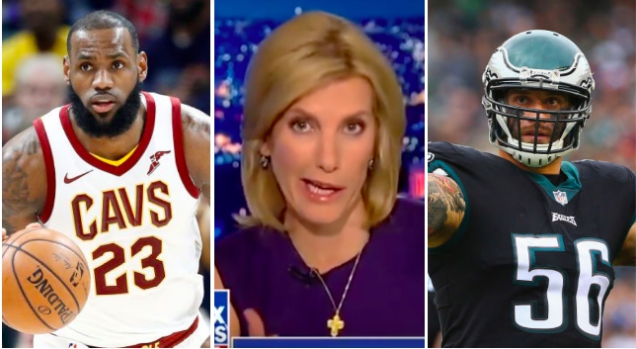 Comments by Fox News host Laura Ingraham are going viral today after she told LeBron James to “shut up and dribble” following his disparaging comments about President Trump.

LeBron appeared on UNINTERRUPTED with Kevin Durant and Cari Champion and took pointed jabs at the POTUS, going as far to say he “really don’t give a fuck about people.”

His full comments are transcribed below:

“The climate is hot,” James responded. “The No. 1 job in America, the appointed person is someone who doesn’t understand the people. And really don’t give a f— about the people. When I was growing up, there was like three jobs that you looked [up to] for inspiration. It was the president of the United States, it was whoever was best in sports and it was the greatest musician. You never thought you could be them, but you can grab inspiration [from them.]“

“And this time, right now, with the president of the United States, it’s at a bad time. While we cannot change what comes out of that man’s mouth, we can continue to alert the people that watch us, that listen to us, as this is not the way.”

James added, “It’s not even a surprise when he says something. It’s like laughable. It’s laughable and it’s scary.”

Laura Ingraham managed to make herself more unlikable with a snooty, awkward segment ripping into LeBron and calling into question his intelligence and credentials to talk about politics.

I’ll be replying to my own tweet with a collage of your network allowing political commentary from a few folks. https://t.co/WUGl1WQSLE

I’m sure the network she works for has interviewed a bunch of athletes, just couldn’t find the screenshots quickly. The point is, what’s the prerequisite for who can talk politics? So, Fox News folks who agree with Laura… you okay with these segments?

And if you reply “stick to sports,” you should probably tune of out Fox News because they’ve got karate guys talking climate change on there. (Which I’m cool with… it’s his right.) Unless it’s just about you needing to feel like you’ve got control of athletes like Lebron.

And Twitter users continued to pile on with some good ones.

Laura spends an entire segment ripping on a basketball player for speaking his mind but will actively invite Honey Boo Boo on to talk about foreign policy. Be denser.