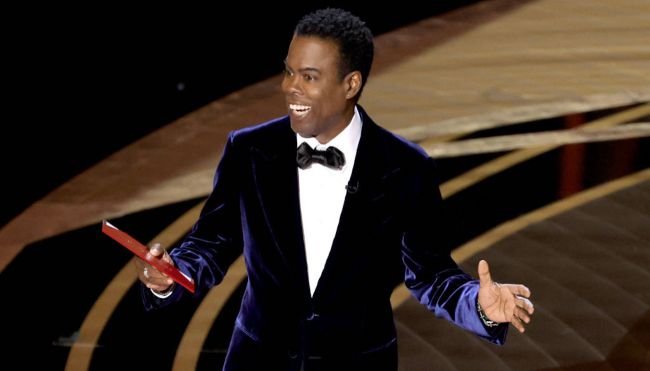 Chris Rock is a standup comedian, which, at the end of the day, is a job where you turn what happens in your life into jokes for other people to laugh at. Naturally, given that he’s one of his generations’ truly great comics, that’s exactly what Rock intends to do when it comes to the instantly infamous Will Smith slap at the Oscars.

During a show in Boston on Wednesday night, Rock publically addressed the incident for the first time, telling the audience that while he’s not ready to make jokes about it yet, he certainly plans to.

“I don’t have a bunch of shit about what happened, so if you came to hear that, I have a whole show I wrote before this weekend,” Rock said. “I’m still kind of processing what happened. So, at some point I’ll talk about that shit. And it will be serious and funny.”

Rock was shockingly smacked by 53-year-old actor Will Smith during the 2022 Oscars ceremony, who won the award for Best Actor for his work in King Richard. The 57-year-old comedian was presenting the award for Best Documentary when he made a reportedly ad-libbed joke about Jada Pinkett Smith’s shaved head.

Smith, after seeing his wife’s reaction to the joke, walked on stage and smacked Rock in the face. Despite his swing at Rock, Smith remained in the audience — where he was consoled by the likes of Denzel Washington, Bradley Cooper, and Tyler Perry — and eventually got back on stage to accept the award for Best Actor. During his speech, Smith attempted to rationalize his actions by saying “love will make you do crazy things.”