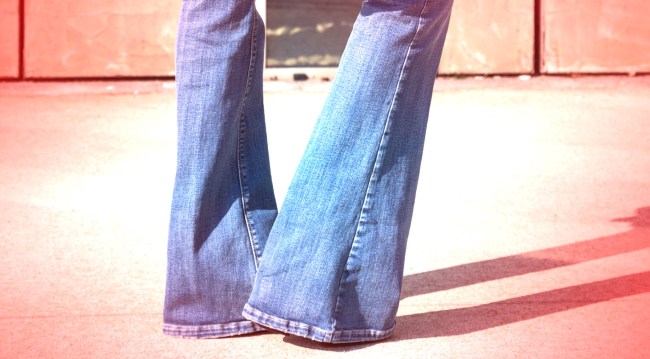 There has been a lot of #FakeNews on the internet over the past couple of years, but none of it has been as egregious as a recent headline put forth by the folks over at GQ this week stating, “Boot-cut jeans are making a comeback.”

Talk about your fear-mongering. It’ll be a cold day in hell before anyone ever puts me in a pair of bell-bottom jeans. (Or I am ever seen in public with anyone wearing them.)

And I am not alone, as this headline and accompanying article elicited all SORTS of negative reactions from folks on social media.

Balenciaga designer Demna Gvasalia decided to include the style in the brand’s spring lookbook. Whether paired with a red flannel overcoat or an oversize quilted jacket, the flared-out jeans are hard to miss. That, we’re pretty sure, is the point.

It’s easy to see why Gvasalia might have picked this particular moment in fashion to resurrect boot-cut denim. This year has brought on a pants revolution within the world of menswear. Guys are opting for jazzed-up tan chinos, wavy pleated trousers, and contemporary cargo pants. Which is to say that men are stepping out of their comfort zone when it comes to pants.

That’s because men are idiots.

That being said, at least those of us in the fight against this horrific fashion trend possibly returning have one Chrissy Teigen in our corner as she issued this A+ response to GQ’s claim.

And that, right there, is why she is our queen.

Also joining us in this fight are Seth Rogen, former MLB pitcher Brandon McCarthy, and, well, pretty much everyone.

I know you've used your platform/celebrity to weigh in on many critical issues, but this might be the most important. Thank you.