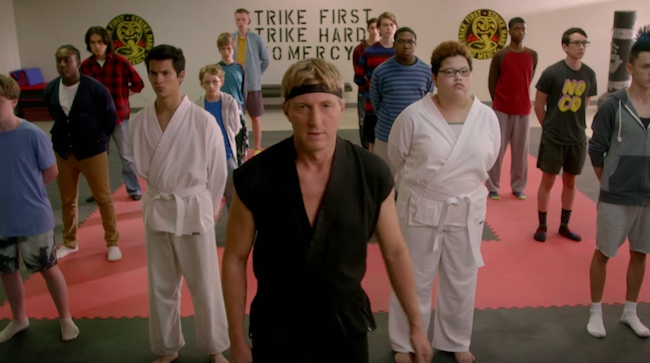 In 1984, Daniel LaRusso overcame a devastating knee injury during the finals of the All Valley Karate Championship and delivered a crushing crane kick to the head of Johnny Lawrence, the golden boy of the Cobra Kai dojo that served as the antagonist in The Karate Kid. It’s been 34 years since Daniel-san took home the trophy, and if the trailer for the upcoming reboot of the franchise is any indication, his rival hasn’t fared so well since then.

Last year, YouTube announced they’d be produced a series starring the original cast of The Karate Kid and gave us our first (brief) look at the upcoming Cobra Kai a month ago. They’ve finally released a full-length trailer, and it looks like the tables have turned since the two teenagers faced each other a few decades ago.

The trailer opens with Johnny laying facedown on his floor surrounded by a bunch of Coors Banquet he crushed on his way to reaching that point of drunken misery. It appears he’s doing slightly worse off than Daniel, who’s operating his own car dealership and doesn’t appear to know the difference between the words “bonzai” and “konichiwa” (he was apparently too busy waxing cars to learn any Japanese from Mr. Miyagi).

There’s a definite tonal shift from the original movie, with Johnny playing the role of mentor to bullied high school students. With that said, as a huge fan of Roadhouse, I’m willing to watch basically anything about a successful asshole getting irrationally mad about someone who has the nerve to operate their own small business.

You can check it out yourself when it hits YouTube Red on May 2nd.