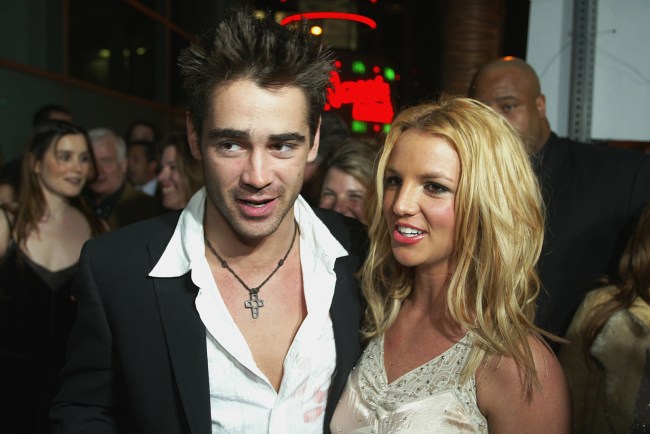 Colin Farrell has famously been sober for 13 years but back when his career was taking off the dude would throw them back with the rowdiest drinkers in Hollywood. He checked into rehab for drug addiction back in 2005 for painkillers and ‘recreational drugs’ but has been sober for almost a decade and a half now.

His films have brought in a lifetime total of $1,520,097,338 at the global box office with an average of around $40 million per film. But his first two movies, The War Zone and Tigerland combined for $394,133 at the box office so those are kind of hilling his averages.

The fifth movie Colin Farrell appeared in was Minority Report starring Tom Cruise, a 2002 movie which brought in $132,072,926 at the global box office. Colin recently gave an interview and discusses how it took him 56 takes to say ONE LINE (10 words) because he’d gotten so hammered the night before.

In an interview with the UK Mirror, Farrell, 43, admitted he was once so hungover while filming 2002’s “Minority Report” with Tom Cruise that it took him 56 tries to say one line.
“There were a couple of hairy days. I asked them with a great array of arrogance that they not work me the day after my birthday,” Farrell recalled. “I said, ‘Please don’t have me working on June 1st, ­because my birthday is May 31st.’”

Production didn’t seem to care about Farrell’s then-25th birthday and made him come into work.
“I thought a $100 million film would at least listen to that ­request … but I worked. It was a rough night and I didn’t get any sleep,” he continued. “The line was, ‘I’m sure you’ve all grasped the fundamental paradoxical pre-crime methodology.’
“I only know it now, still, 16 years later because it caused so much panic and anxiety. It should be on my tombstone.”
To add insult to injury, the “Dumbo” star said his sister happened to be on set that day visiting him.
“… she had to leave the set after 56 takes,” he said. “I was a disaster.” (via PageSix)

In his defense, he did ask them for the day off. But I don’t fully understand why he wouldn’t just get hammered the night before his birthday so he could sleep off that hangover on his actual birthday instead of getting so blindly shitfaced on the night of his birthday that he couldn’t even get 10 words out of his mouth.

I’ve certainly been there myself, such a useless sack of human waste that I couldn’t even get out of bed because I was so hungover from the night before. But I was never working on a $100M Hollywood film that would’ve been paying me six or seven figures to say 10 FUCKING WORDS in an entire day’s work.

According to the PageSix article, Colin checked back into rehab in 2018 but it was just for a ‘tune up’ and he’s still been sober for 13 years.