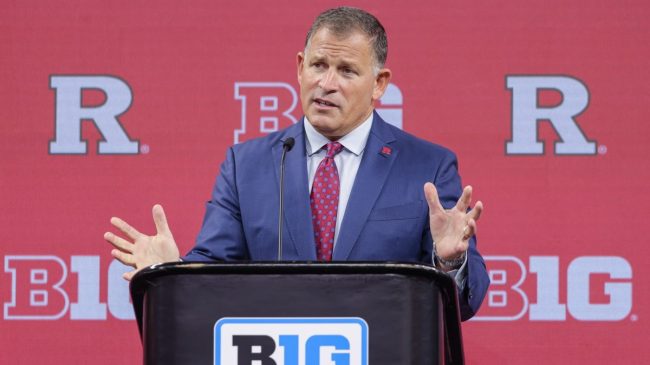 The program is trying to turn things around, however. The Scarlet Knights brought back coach Greg Schiano in 2020 and is recruiting as well as it ever has. Schiano’s first stint with the school lasted from 2001-2011 and featured two 9-win seasons and an 11-win season.

Since he’s left, however, things have been bleak.

The team has even resorted to selling tickets at Costco to try to get fans to come to games. And it appears things aren’t getting any better anytime soon.

The 2022 college football season began on a rough note for Rutgers. News broke early on Saturday that Scarlett Knights would be without starting quarterback Noah Vedral for their season-opening game against Boston College.

#Rutgers QB Noah Vedral is OUT for today’s game, listed as week to week.

Expect Wimsatt or Simon to get the nod versus #BostonCollege.https://t.co/9jE6FNeVIY

That left Schiano with a what seemed like a pair of options. Either play former four-star recruit and current sophomore Gavin Wimsatt, or start redshirt sophomore Evan Simon.

Though apparently Schiano had a third option up his sleeve.

#Rutgers Football QB controversy continues as the first drive went like this…..

we're all the way back https://t.co/qkHrUKTuFV

I guess Rutgers is about to let us all find out. College football is back, baby!