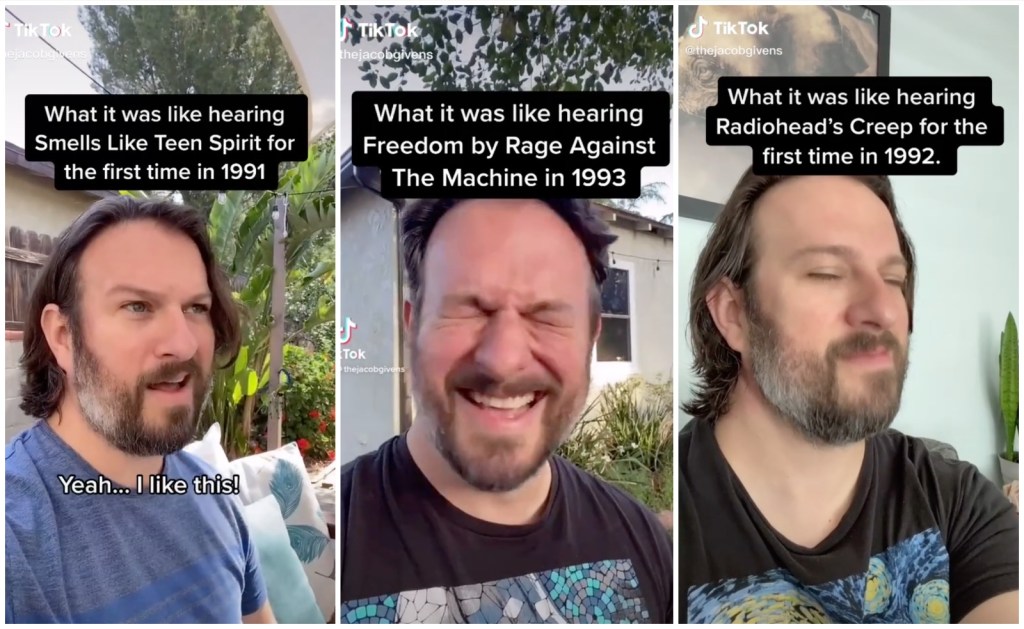 Comedian Jacob Givens racked up millions of TikTok views in the past week. His 90s nostalgia videos show what it was like hearing Rage Against The Machine, Nirvana, and others for the first time.

Mid-way through last week, Rage Against The Machine started trending on Twitter. This happened after someone tweeted out one of Jacob Givens’ TikTok videos where he captures 90s music nostalgia.

The format of these TikTok videos is generally the same. He plays both friends having a conversation as the music is playing. And it’s this guy’s energy that really makes these videos so perfect.

TikTok videos look funky sometimes on this site so here’s the Twitter version as well as the TikTok clip from his channel. This first video is the Rage Against The Machine clip but I have also included the Nirvana and Radiohead videos as well.

I died then watched a couple more times. https://t.co/xQrmHpfTEH pic.twitter.com/nQ6BZ9ABgy

♬ Freedom – Rage Against The Machine

I definitely didn’t react to every single Rage Against The Machine song that way but I remember hearing my older brother play it for the first time and I was floored. It was one of those moments that changed my world of music forever in an instant.

Here’s Jacob Givens’ TikTok of what it was like hearing Radiohead’s ‘Creep’ for the very first time in 1992, and Nirvana’s ‘Smells Like Teen Spirit’ below that:

When I knew I was a weirdo and it was beautiful. #90s #radiohead #throwbacks #IFeelWeightless #fyp

If you’re not following @brobible yet on TikTok go do that now. Our guy Grayson is killing it over there with videos you might not see here on the website or on our Instagram but they’re fantastic.

I had never heard of comedian Jacob Givens until last week. When I saw the first Rage Against The Machine video I thought it was a young Phish drummer Jon Fishman. But I smashed that ‘follow’ button immediately because his clips are fantastic so far. Go toss him a follow as well!

♬ Man in the Box – Alice In Chains

They’re all so good. If any of those videos are not loading you can click through on them to visit TikTok directly.