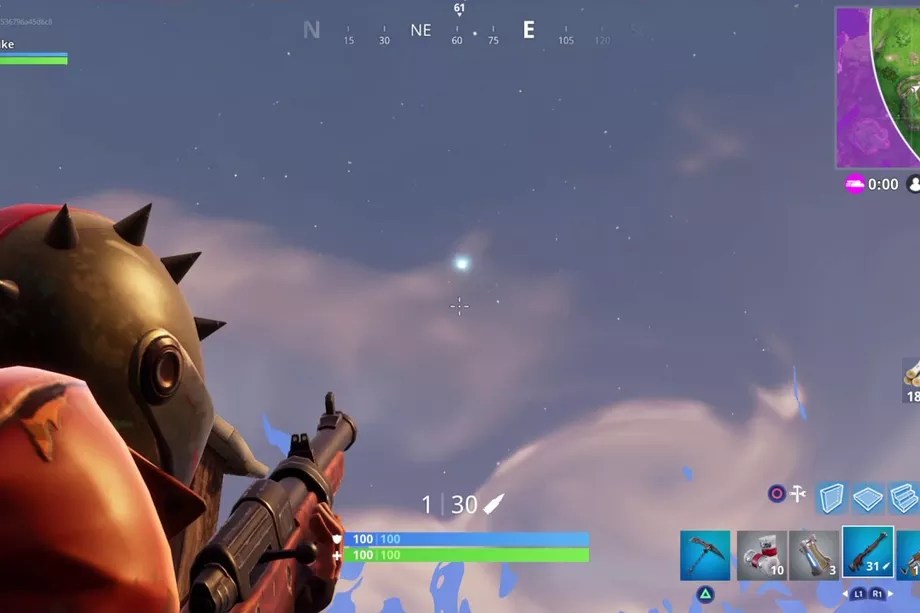 If you look up in the sky while playing Fortnite Battle Royale you’ll see an ominous light in the sky. Some gamers suggest that it is an alien spaceship, but most people are convinced that it is a comet and it is hurtling straight towards Fortnite. The light started as a small beam of light and has gradually grown in size. What does this all mean? Most likely it means that big changes are on the way.

One theory about the mysterious light is that it is a comet that will collide into the map, specifically at the Tilted Towers. Players have noticed their controllers have randomly been rumbling. One gamer translated the odd rumblings through Morse code and it spells out “SOS D 5 418.” “SOS” is the international Morse code distress signal, while “D5” could be a reference to the location of the Tilted Towers on the map, and “418” might represent April 2018.

So is Epic Games preparing to obliterate the Tilted Towers with a comet? Tilted Towers is one of the most popular parts of the map because it is stocked with loot and weapons. Because of all that goodness all in one place, many argue that the Tilted Towers make the map unbalanced. What better way to get rid of the Tilted Towers than a monumental detonation by a comet. That’s way cooler than a boring update.

Plus there has been the addition of telescopes into the game, so Epic definitely wants you to look at the sky at the incoming cosmic event. The comet collision could kick off Season 4 of Fortnite Battle Royale. There are dinosaur skulls and mushroom clouds in the stickers, which could hint of an extinction-level event that might alter the board dramatically.

Others have noted that there has been a whole space thing going on with the Battle Pass recently with numerous astronaut suits. So maybe this is an alien spaceship that can take you to a new map that is set in space. We’ll have to wait and see exactly what happens.