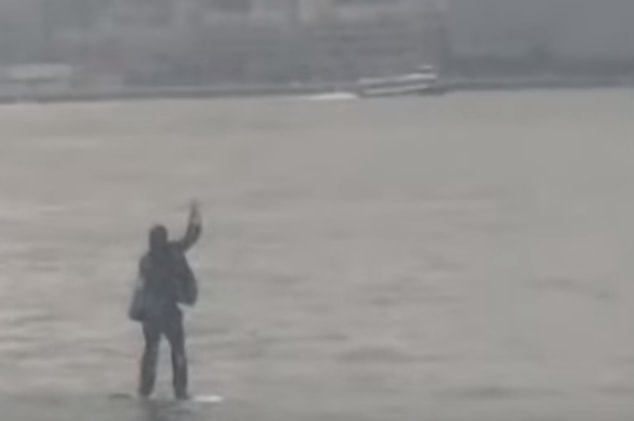 The commute from New Jersey into New York City is a hellish peregrination full of obnoxious strangers who do not respect your personal space and do not believe in deodorant. Besides having to survive the living nightmare of being cramped in a small area for far too long, the costs for commuting from New Jersey to New York City can be pricey. One man found a way to travel from Jersey to NYC in a much more freeing and refreshing mode of transportation — a paddle board.

Scott Holt, a 32-year-old comedian who lives in Jersey City, had a meeting in the big city to find a manager. He didn’t have time for the ferry or the PATH train so he simply paddle-boarded across the Hudson River. Holt was dressed in a suit, fancy dress shoes, and had a briefcase, yet it didn’t slow him down.

“I didn’t really know where I was going. I was just aiming in that direction,” Holt said of Manhattan. “I was trying to get towards a spot I could get on and off quickly, and then the current started to pick up and I was like, ‘Oh f—k, I gotta get out of here quick.’ Any port in the storm, you know?”

Holt paddled to a closed-down water taxi dock and some police officers were there to greet him. “They said they could have arrested me but the cop was gracious enough to just tell me to (move) on,” he said. “They were surprised by my dress shoes and were nice enough to ask what time my meeting was. Don’t worry. I made it on time.” But an employee from New York Waterways wasn’t as chill. “He was like, ‘Are you trying to f—king die today?’”

His journey went swimmingly and made it across the river in 30 minutes. BONUS: the trip was free. However, in retrospect, Holt realized paddle boarding in the Hudson River might not be the smartest idea. “I stupidly didn’t bring a leash or a lifejacket, so if a [wave] took the board, then I just would’ve been stuck out there drowning in a suit,” Holt explained. “That’s the worst way to drown — dressed up. I didn’t think about ferry propellers chopping my head up till after,” the comic explained. “Ignorance is bliss.”

Sadly, not everything worked out with his meeting. “I was trying to meet a manager to represent me to be a comedian, but that meeting didn’t go as well as the commute,” Holt said. “So I’m still on the market for a manager.” Perhaps it was the dress shoes with dirty brown water leaking out of them that put a kibosh on the new manager?