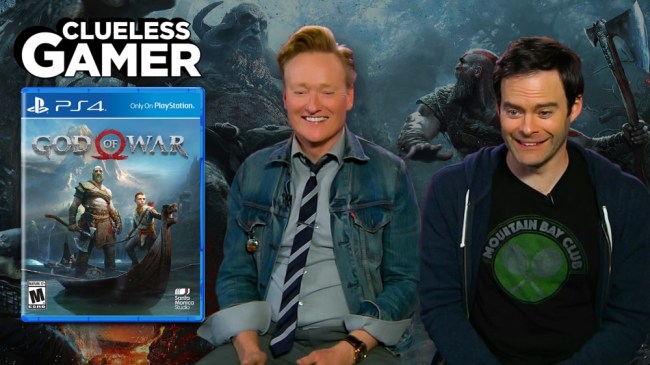 God of War 4 sold 3.1 million copies in its first three days since being released, making it the fastest-selling PS4 game ever. So pretty much everyone is playing God of War 4, even Conan O’Brien and Bill Hader. And while God of War 4 is getting perfect scores (as seen here, here and here), Conan and Hader didn’t seem to too impressed by the Norse-mythology-based video game.

In the most recent episode of Conan’s “Clueless Gamer” segment, Hader and O’Brien attempted to play the new God of War and it didn’t go swimmingly. Despite being able to decapitate Draugrs with the Leviathan axe, Conan wasn’t blown away by God of War 4. Weird, right?

The PlayStation phenomenon has tremendous graphics and a heartwarming story of a dad parenting his son by taking him on a bloodthirsty journey to kill anyone and anything that comes in their path. “This is recreating the awkward silences I’ve had with my father,” O’Brien said of the relationship between Kratos and his son Atreus.

“Your mother’s dead! Remember when your mother died — and we burned her? Your therapist said I probably shouldn’t have let you watch that,” the late-night host joked. “I worked out some things in God of War, and I can now use it in my life,” Conan said of the early “Game of the Year” contender.