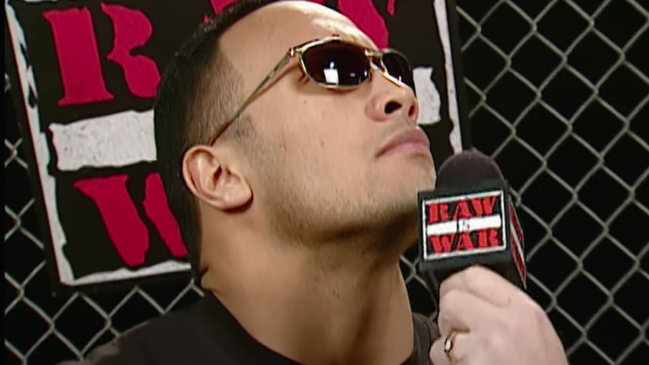 You don’t have to be a diehard wrestling fan to appreciate the pop culture impact of WWE’s “Attitude Era,” which saw the organization lean into a ton of edgy angles and over-the-top gimmicks in the late 1990s an attempt to establish ratings supremacy over the WCW in the “Monday Night Wars.”

That era spawned some of the biggest superstars in the history of professional wrestling, as it marked the arrival and ascension of legendary characters including Stone Cold Steve Austin, Triple H, and, of course, Dwayne “The Rock” Johnson.

Johnson’s father and grandfather had both made a name for themselves in the ring, and the third-generation wrestler (whose daughter recently made her WWE debut) was able to carry on their legacy while rocketing to a new tier of stardom thanks to his skills in the squared circle and ability to cut some absolutely incredible promos on the mic.

The Rock absolutely oozed charisma and established himself as a fan favorite with the help of the many, many catchphrases he deployed while taunting the candy-ass jabronis he faced off against and hyping up the millions—and millions, and MILLIONS— of fans who were routinely asked if they could “smell what The Rock is cooking?”

While Johnson dreamed up many of those signature lines on his own, there’s one fairly unlikely figure who says he was inadvertently responsible for dreaming up one of them: Conan O’Brien.

At first glance, it might not seem like there’s a ton of crossover between the worlds of comedy and pro wrestling. However, the most successful people in each field tend to rise to the top thanks to their masterful ability to improvise, work a crowd, and commit to a particular bit (there’s a reason legendary comedian Andy Kaufman was drawn to the pastime).

Earlier this week, Conan O’Brien basically said as much while chatting with Howard Stern about former Late Night writer Tommy Blacha, who left the show in 1999 after accepting a job as the Creative Director at the WWE.

During the conversation, O’Brien revealed Blacha borrowed a phrase the talk show host routinely deployed when he was trying to quiet down members of his staff—one that The Rock himself uttered while chatting with Michael Cole during a Royal Rumble.

“One of my proudest moments in comedy is I used to screw around with the writers a lot, and I would put on the attitude of this larger-than-life blowhard; I’d come into the room and I’d be like, ‘Quiet down, you idiots!’ And I would go on these long rants.

One of my put-downs that I came up with that was so stupid but I liked it was if a writer was going on or said something that I didn’t like, I’d say, ‘Why don’t you go have a nice tall glass of shut-up juice, alright?’

It was such a stupid putdown, but Tommy liked it and Tommy said ‘Watch the match this weekend,’ and it was The Rock. The crowd went crazy.

Then the next week, Tommy said check this out so I tune in that match, people are holding up signs that say ‘Drink Some Shut-up Juice. Tommy was apologizing and I said, ‘What are you talking about? Dwayne The Rock Johnson just said it. Vince McMahon gave you a high five.’

I was in heaven.”