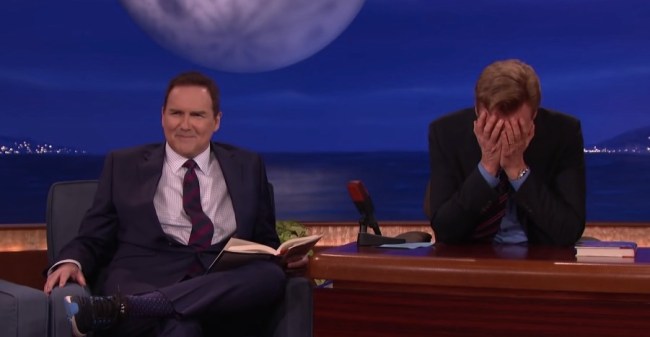 Norm Macdonald was a disruptor. It was simply his style. He reveled in discomfort and awkwardness to such an extent that it often felt like the only person he was trying to make laugh was himself — if the crowd happened to get a chuckle out of it too, then so be it.

This famed penchant for disruption, of course, famously cost him his gig as host of Weekend Update on Saturday Night Live. As legend has it, Macdonald refused to stop making jokes about O.J. Simpson despite a directive from NBC execs, particularly Don Ohlmeyer (for what it’s worth, prior to his own passing in 2017, Ohlmeyer denied playing any role in Macdonald’s firing).

Around the time of Macdonald’s firing, his pal and fellow comedian Conan O’Brien was the fresh-faced host of Late Night, having taken over the gig from David Letterman in 1993. Obviously, Late Night is an NBC program, and because of that, Conan says that higher-ups within the organization — namechecking Ohlmeyer specifically — told him he was not allowed to book Macdonald on his show.

“I wrote a letter to Don that said, you know, I got this directive [not to book Norm Macdonald]. You’ve hired me to do the best show I can do, and this is my best guest,” O’Brien recalled, citing a sense of “loyalty” to Ohlmeyer, who hired him to host “Late Night” for the network. “I need to do my job, which is the best show I can do,” he said in the letter.

O’Brien received the letter back with a response from Ohlmeyer written in the margin, saying something akin to, “I expected better from you.”

“It was basically me being told … I’m really disappointed in your lack of loyalty or something,” O’Brien said. “And I felt at the time, that’s not a lack of loyalty. That is loyalty. I always greedily wanted more Norm.” [via Yahoo, transcribing Conan O’Brien Needs a Friend]

Obviously, either NBC was bluffing or O’Brien simply ignored their demands, as Macdonald would go on to make a handful of memorable appearances on Conan’s show throughout the years.  If you were even remotely a fan of Norm’s comedy, then Conan’s full hour-plus long podcast is definitely worth the listen. Rest in Peace, Norm.