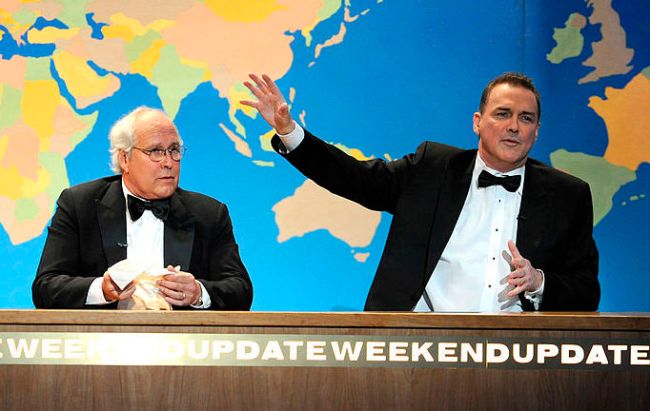 Like most comedy fans, I’ve spent the two-or-so days since Norm Macdonald’s passing combing through all of his old sketches, stand-up routines, interviews, and late-night talk show appearances. And while any time spent in the mind of Norm Macdonald is time well spent, one of the most fascinating conversations I’ve come across was his 2011 appearance on WTF with Marc Maron.

Speaking for over an hour, the two stand-up comedy veterans talked about everything from Macdonald’s Canadian upbringing to his love of art to his crisis of faith to his storied career, including his infamous stint as the host of Weekend Update.

As Macdonald told Marc Maron during an appearance on his WTF Podcast back in 2011, Saturday Night Live was in the process of revamping Weekend Update when Norm first arrived, and they wanted to give him the gig with a female co-host. Macdonald was, as he tells it, none too thrilled with the idea:

“They wanted me to do Weekend Update with a lady, like the two of us. And I was like ‘That sounds like shit — if there’s a lady and a dude, what are we making fun of local news?’

Luckily for Macdonald, though, an anecdote from legendary former cast member Steve Martin, who was serving as the host that weekend, was able to change the mind of Lorne Michaels with a personal and totally benign anecdote.

“So anyway, I go, ‘I don’t want to deal with a lady, let [former SNL cast member Al] Franken do it.’ I didn’t care that much about it, so I could just do stand-up. But then, what happened was, Steve Martin walked in because he was hosting. And Lorne embarrassed with me ‘Let’s see what Steve thinks about it.’ And Steve doesn’t give a f–k about anything. So Lorne does this big long speech, meanwhile, Steve Martin is uninterested, but luckily, he just said out of the blue, ‘I did this award show with some broad and they paired me up with her and she f–ked everything up.’

This, said Macdonald, was apparently enough to change Michaels’ mind:

“So then Lorne goes, ‘Ah, look, some support from an unexpected place.”

“And THAT’S how you got the solo Update?!” Maron chimed in.

“Yeah, Steve Martin, cause he was such a hero to Lorne.”

“He had a bad experience with an award show and you get run the solo on Update?!” Maron replied.

It just goes to show that despite the immense talent you may have, sometimes the fates still need to intervene. We’re sure glad they did. Rest in Peace, Norm.