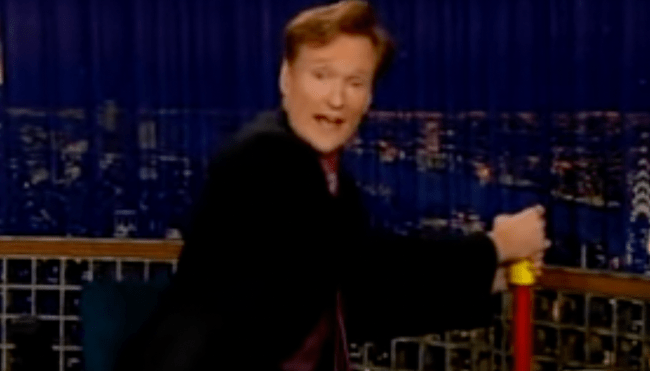 In June, Conan O’Brien officially bid farewell to late-night television after an incredible career that spanned almost three decades. At the end of his final show, he managed to succinctly sum up the essence of his uniquely weird brand of humor as “kind of stupid, but [there’s] something smart in there somewhere, and then there’s a little, tiny sort of flicker of what is a kind of a magic.”

However, I’ll always have a special place in my heart for one particular segment that made its grand debut after NBC merged with Universal: the Walker, Texas Ranger Lever.

in 2004, O’Brien started making Chuck Norris jokes before it was cool with the help of the Walker, Texas Ranger Lever, which triggered a clip highlighting the show’s unbridled insanity whenever it was pulled—like this one where a young Haley Joel Osment casually recounts his AIDS diagnosis.

The premise of the bit was that O’Brien was able to use the clips for free as a result of the merger, but as he revealed during a recent episode of his podcast, that was decidedly not the case. It would appear the popularity of the Walker, Texas Ranger Lever was ultimately responsible for its downfall, as he shared what forced him to retire it, saying:

“It was one of my favorite things to do and then we had to stop doing it. The actors who were in the clips, they started to recognize that we were showing these clips of them and they started to demand all the money that you needed to pay them in residuals.”

O’Brien claims he was told the Walker, Texas Ranger Lever would cost the show “millions of dollars” if he kept yanking it and was sadly not allowed to employ the legal strategy he dreamed up:

“I want it to go to trial, and I want to defend myself. And I want to show the clips to the jury and say, ‘Ladies and gentlemen, that is not acting.’”

That is truly a damn shame.