For The Final Time, Paul Rudd Hit Conan O’Brien With The ‘Mac and Me’ Prank 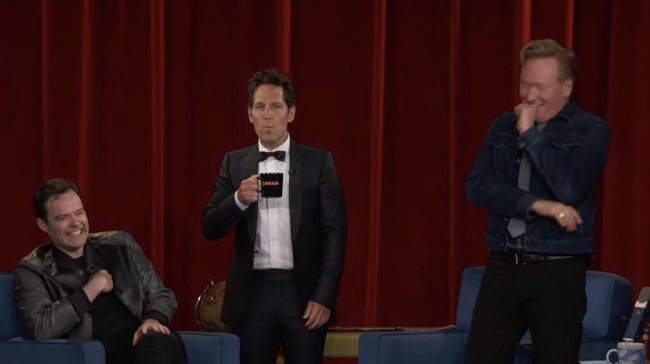 After nearly 30 years as a late-night host, Conan O’Brien — television’s longest-tenured late-night host — will be stepping away from the desk (or the chair) for the final time on Thursday night as TBS’ Conan airs its last episode.

It’s been a hell of a run for the now 58-year-old O’Brien, who first launched his on-camera career after taking over NBC’s Late Night from David Letterman back in 1993. Prior to becoming the host of Late Night, Conan famously worked as a writer for both The Simpsons and Saturday Night Live.

As is tradition with all late-night hosts saying their goodbyes, all of Conan’s oldest and best buddies have been popping up on the show in recent weeks, with Bill Hader and Paul Rudd appearing as the guests on Monday.

RELATED: Jack Black Will Be The Final Guest On Conan’s Late-Night Show

If you’ve ever remotely followed Conan’s nearly three-decade-run as a late-night host, then you certainly know about the running joke Rudd has been pulling on him all that time: whenever Rudd would appear on the show, instead of promoting his new movie or TV series, he’d instead show a clip from the delightfully bizarre 1988 E.T. rip-off Mac and Me.

Naturally, seeing as this was Rudd’s final appearance on Conan, he hit O’Brien with the Mac and Me prank not once, but twice:

Now, while Conan may be wrapping up his career as a late-night host, O’Brien will remain a fixture on television as he’s set to produce and star in a weekly variety show on HBO Max.

Hell of a run, Conan — can’t wait to see what that weird brain of yours cooks up for us next.