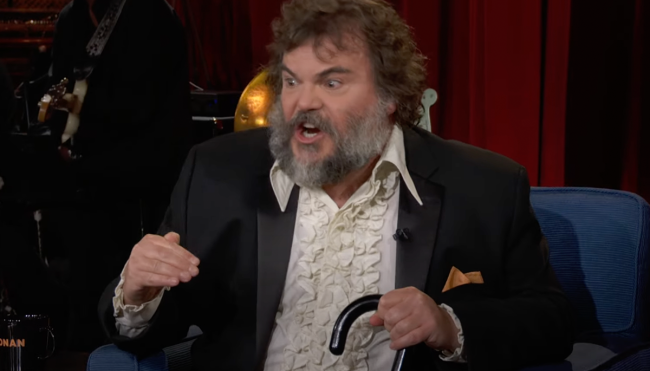 Thursday night marked the end of a hilariously absurd era that saw Conan O’Brien wrapped up his wild 28-year ride on late night television before riding into a sunset (brought to you by HBO Max™: It’s Not TV. It’s HBO Max”).

The comedy icon wrapped things up with a touching 15-minute monologue where he thanked everyone who made his journey possible before closing with the most accurate summation of his patently weird brand of comedy you’ll ever hear. He describes it as “this really crazy (and seemingly pointless) pursuit to do things that are kind of stupid but have something smart in there somewhere and then there’s a little, tiny sort of flicker of what is a kind of a magic, I think.”

In the weeks leading up to his last hurrah, a number of people stopped by the studio to pay their respects, with Seth Rogen rolling onto the set with a celebratory joint and Paul Rudd popping in to once again play a clip that totally, definitely isn’t that scene from Mac and Me.

A couple of weeks ago, we learned Jack Black had earned the honor of being Conan’s final guest. It was safe to assume the tremendously talented actor and musician would have something special up his sleeve, and when he walked onto the stage with a cane in his hand, I figured it was only a matter of time until he made a grand entrance by channeling his inner Willy Wonka.

Unfortunately, it’s a bit hard to do a somersault when you actually need a cane because you suffered an ankle injury that also requires the use of a boot—which is what happened when the elaborate sendoff Black had planned went very, very wrong.

The injury might not be a laughing matter, but the same cannot be said for the circumstances surrounding it. Black had initially planned to fake an injury during a musical number and get carried into an ambulance by paramedics before heroically sprinting back inside. Unfortunately, he suffered a very real injury during filming, which led to a truly unreal series of events that Conan recounted:

They said, ‘We just need an ACE bandage’ and I said, ‘Well, get one out of the ambulance’ and they said, ‘No, it’s a fake ambulance.’ So we have these two guys dressed as ambulance drivers, with an ambulance, who drove to CVS and bought ACE bandages.

Thankfully, Black managed to battle through the sprain and ultimately serenaded O’Brien as only he can.

This is a just tribute.