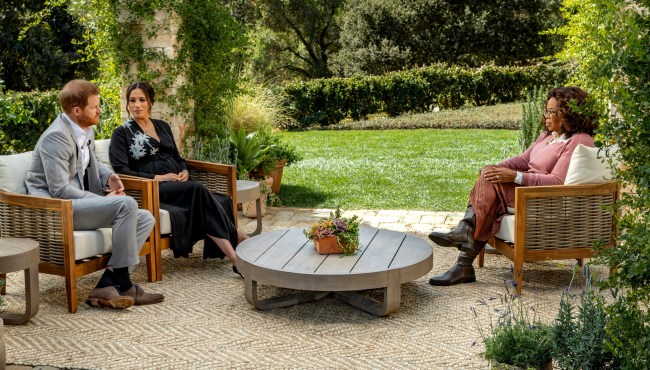 I don’t know about you, but there are few things in life I enjoy more than a good conspiracy theory.

I’m not sure why that is, but they are even more fun when they involve famous people that I have no emotion invested in like Oprah Winfrey, Meghan Markle and Prince Harry.

Following the airing of former Deal or No Deal model and her husband’s interview with Oprah on Sunday night, the conspiracy theorists of the world went into overdrive, coming up with a couple of real doozies.

Of course, they both originated with the always clear-thinking folks associated with QAnon.

The first conspiracy theory they came up with was that Oprah Winfrey was wearing an ankle monitor during the interview because, as we all know, she was arrested in connection with a global, satanic, cannibalistic child sex trafficking ring run by the Hollywood elite last year, right?

The logic behind this latest belief is based on the fact that Winfrey was wearing boots and there was a bulge around one of her ankles. Seems like rock solid evidence, no?

Oprah, as one would expect, tried to debunk the conspiracy theory.

Just got a phone call that my name is trending. And being trolled for some awful FAKE thing. It’s NOT TRUE. Haven’t been raided, or arrested. Just sanitizing and self distancing with the rest of the world. Stay safe everybody.🙏🏾

Right along beside this belief was a competing conspiracy theory, also put forth by a QAnon influencer, which claimed, “The whole interview was CGI. The White Hats threw in the ankle monitor just to get the discussion going.”

This difference of conspiracy theory opinion ended up sparking a little tiff between QAnon believers.

Vice reports that originator of the Oprah ankle monitor theory didn’t appreciate being dismissed by the second influencer, calling the claims of CGI “irresponsible and people should be wary of those who make these claims without proof.”

They later followed that bit of what-the-f**kery with, “We no longer live in a world where you can just make shit up. That’s what liberals do. We are better than that.”

It’s quite the scene, man.

1.Oprah had an ankle-monitor (meaning she's under arrest for child murder crimes)
2. The whole interview was CGI and she's really been executed, but the CGI people made it look like Oprah has an ankle monitor anyway. pic.twitter.com/mK5ccETSHQ

The channel run by more 'traditional' QAnon influencers IET and AwakenedOutlaw is warning against the CGI theory. Why? Because they're losing ground to the wilder stuff by people like GhostEzra. pic.twitter.com/qRNr77aQaH

GhostEzra says Biden is a body-double who works for Trump, and the Dems and celebs are body doubles or CGI fakes. His Telegram channel has 228k members, up from 125k just three weeks ago. That's more than the channel IET, AO and the others share. https://t.co/FFJdV5QSs2