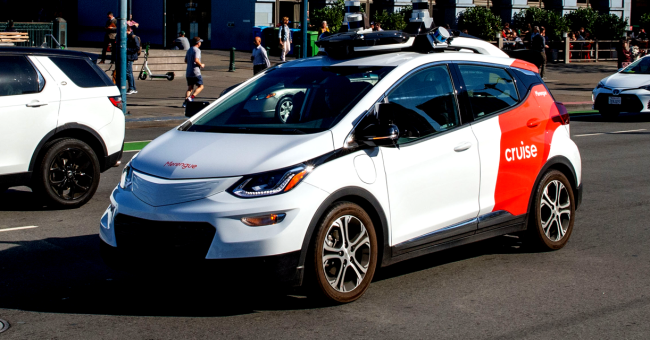 Police officers attempting to pull over a car in San Francisco’s Richmond District recently got a bit of a surprise when they discovered no one was driving the vehicle.

The officers were pulling the car over because it was driving at night without using its headlights.

In video of the bizarre scene, police are seen pulling over a Cruise vehicle. When one of the police officers gets out and walks up to speak to the driver a look of bewilderment crosses his face when he sees no driver and fails to open the driver’s side door.

Then, as the officer starts walking back to his car the Cruise takes off like it’s going on the lamb trying to escape custody.

Instead it pulls over, again, this time with its hazard lights on, in front of a restaurant, as the police officers race to catch it. Once stopped, the cops get out and inspect the vehicle one more time before making a call.

“Are you serious? How does that happen?” one bystander can be heard saying in the video.

According to Gizmodo, Cruise’s “driverless deployment permit” in San Francisco, it’s autonomous taxis are only supposed to be operating between 10 p.m. and 6 a.m.

Cruise, which obviously saw that one of their cars was going rogue in a video going viral on social media, tweeted out, “Our AV yielded to the police vehicle, then pulled over to the nearest safe location for the traffic stop, as intended. An officer contacted Cruise personnel and no citation was issued. We work closely with the SFPD on how to interact with our vehicles, including a dedicated phone number for them to call in situations like this.”

The video of police pulling over the driverless car generated an avalanche of amused comments.

One viewer, echoing the sentiments of many, commented, “If that was me, I’d get cited for no headlights, eluding, interference, no seatbelt, failure to provide license, registration and proof of insurance after being hauled off to jail and the car impounded. What if it starts moving again with a cop in its way? Who gets the ticket in this case?”

Another, looking to the future, asked, “What happens when AI cop cars are pulling over AI cabs next year?”

That is a very good question.

Then again, this all could have very easily been avoided.

Why aren't the AV's lights on all the time? Wouldn't that be the easy, safest and most logical solution?