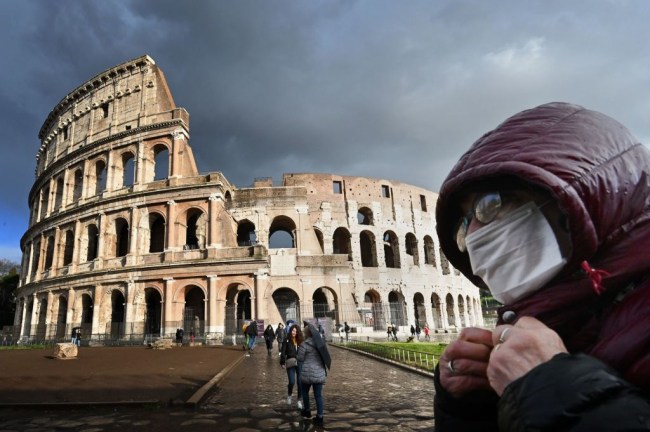 The latest coronavirus update shows that Italy has taken much more aggressive steps in order to attempt to stop the spread of the coronavirus. On Monday afternoon, Italy announced that the entire country was on lockdown. The Italian government instituted far more stringent policies to combat the COVID-19 than previous efforts.

The entire country of Italy is now under lockdown and travel will be restricted. Anyone attempting to leave their “containment region” can be sentenced to three months in prison and a fine up to 206 euros ($234).

Besides preventing all movement other than for work and emergencies, Italy is also banning all public gatherings and suspending sporting events.

There have been prison riots in several correctional facilities in Italy after new rules were implemented that suspended visitations to jails. The prison in Modena was set on fire, and six inmates died during the riots.

Antonio Pesenti, the coordinator for intensive care in the crisis unit for the northern Lombardy region, said Lombardy’s health care system was “one step from collapse” after a “tsunami of patients.”

“We are now being forced to set up intensive care treatment in corridors,” Pesenti said. “We’ve emptied entire hospital sections to make space for seriously sick people. Italians should be worried.”

Italy has 9,172 confirmed cases of coronavirus, the second-most after China, that has over 80,000 cases. The current worldwide statistics on the COVID-19 show that there are 114,000 confirmed cases, and the death toll has risen to more than 4,000. The World Health Organization (WHO) warned that the threat of coronavirus becoming a pandemic is now “very real.”

There are currently 728 confirmed cases of the novel coronavirus in the U.S. across 37 states. Washington state has the most with 180 cases and 22 deaths, followed by
New York state with 142 cases, and 105 in California.

Florida Gov. Ron DeSantis declared a state of emergency on Monday. Florida also instructed anyone who has recently traveled internationally to self-quarantine for 14 days. There have been 18 people who have tested positive in Florida and two deaths.

“People over the age of 60 are much more likely to develop complications from the coronavirus and to be hospitalized,” said US Surgeon General Jerome Adams. He added that the average age of death from coronavirus in the U.S. is 80.

Researchers believe that the real cases of coronavirus in the United States could be nearly 13-times the confirmed cases. A study by researchers at the Cedars-Sinai Hospital in Los Angeles suggests that more than 9,000 could be infected with the coronavirus as of March 1.

“This suggests that the opportunity window to contain the epidemic of COVID-19 in its early stage is closing,” the medical researchers said.

The researchers explained that many people show mild symptoms or asymptomatic, meaning that they exhibit no symptoms of the coronavirus, such as a dry cough or fever.

People infected by the coronavirus typically develop symptoms about five days after exposure, and almost always within two weeks, according to a study released Monday in the journal Annals of Internal Medicine.

People may think they have a common cold or seasonal flu, and many won’t seek medical assistance, making it difficult to identify individuals who could spread the disease.

The researchers said the figure of 9,000+ was “very conservative” and “likely to be an underestimation of the true number of infected individuals in the U.S.,” the news release stated.

However, a new study found that many people who get infected with COVID-19 are asymptomatic.

The study titled “Transmission of 2019-nCoV Infection from an Asymptomatic Contact in Germany” was published in the New England Journal of Medicine on March 5. The study explains that many people infected show no signs of having the coronavirus. So they don’t seek medical attention, meaning they are not counted as confirmed cases. So that means that there could be thousands more who are infected, but have no idea. This also means that the COVID-19 mortality rate would be much lower than previously believed.

The mortality rate in South Korea, which has over 7,500 confirmed cases, is 0.6%. South Korea has also done the most expansive testing of any country, testing 109,591 people compared to Italy with 23,345 tests and the United States with 472 tests administered.

RELATED: 2 US Congressmen Are In Quarantine After Coming In Contact With A Person Infected With The Coronavirus

New research found that the COVID-19 can travel twice as far as previously expected and can last 30 minutes in the air. Chinese government epidemiologists in the Hunan province found that the coronavirus can spread nearly 15 feet, previous health advisories suggested that safe distance were between three and six feet apart.

“It can be confirmed that in a closed environment with air-conditioning, the transmission distance of the new coronavirus will exceed the commonly recognized safe distance,” the researchers wrote in a paper published in peer-reviewed Chinese journal Practical Preventive Medicine last Friday.

The study found that the deadly virus could last up to three days on glass, fabric, metal, plastic, or paper. The virus can survive more than five days in human feces or bodily fluids.

The 2019 Global Health Security Index “provides a comprehensive assessment of global health security capabilities in 195 countries” in preparedness for a pandemic or epidemic. The rankings are based on prevention, detection, reporting, rapid response, health system, risk environment, and compliance with international norms. China ranked 51st, Italy was 31st, South Korea was ninth, and the United States was the most prepared of all the nations.

2019 Global Health Security Index: US far outranks every other country in the world in preparedness for a pandemic or epidemic, based on prevention, detection, reporting, rapid response, health system, risk environment & compliance with international norms https://t.co/lUcGDDNGbZ pic.twitter.com/rd8q481hKz