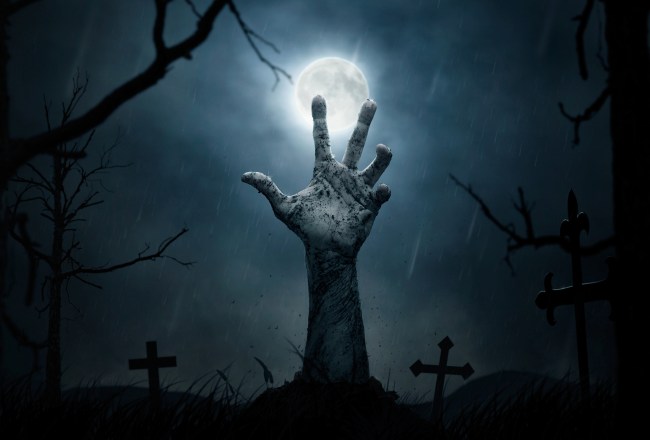 If you’re starting to think the world is dead-set on giving you daily existential panic attacks, you’re right, kind stranger.

If a global pandemic wasn’t preying on your emotions enough, society has collectively decided to add MURDER HORNETS to your nightly paranoia cocktail, an insect that has officially killed one person in Spain since becoming famous.

I am part of the problem.

Because now I am choosing to bring you the very important news of a DAMN CORPSE WAVING THROUGH A CASKET SUNROOF AFTER BEING LOWERED INTO THE GROUND.

The creepy footage was filmed during a funeral in Indonesia in the city of Manado on May 5.

According to the New York Post, the priest heard in the video is saying: “God has said in the Book of John, ‘I am the resurrection and the life. Whoever believes in me, he will live even though he is dead.'” That is when the hand(?) appears.

Here is another video with a spotlight over whatever the hell is going on.

Is this the hand of a dead corpse really moving or is it a trick of light or perhaps worse – did they bury this person ALIVE? This video was taken on 5th May in the city of Manado in Indonesia.#funeral #buried #strange pic.twitter.com/Udiza02ZHs

Before you lock your apocalypse doors, experts believe the cause of this phenomenon was due to something slightly less creepy than being buried alive, but not by much.

Experts debunked the theory that the corpse was still kicking, saying simple rigor mortis was to blame,  according to the report.

The condition, in which the body stiffens during later stages of decomposition, can cause the corpse to move, researchers from Central Queensland University in Australia said, the outlet reported.

Phew, I’m so glad the corpse doing the Harlem Shake is just due to severe decomposition of a human body. Time for lunch!