Costco’s Iconic Hot Dog Combo Has Remained $1.50 For 35 Years Thanks To A Threat From Its Founder 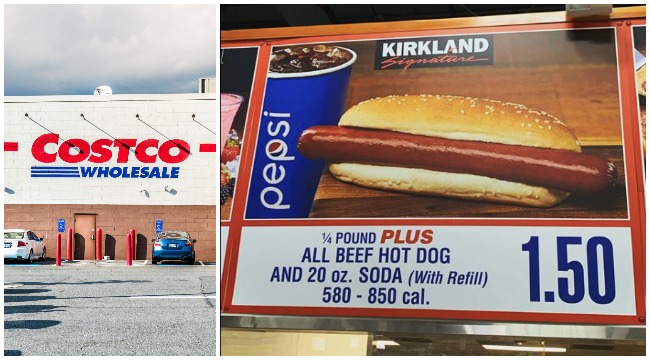 In a world where a stationary bike with an iPad on it costs a vital organ, the pious folks at Costco have kept their quarter-pound all-beef hot dog with unlimited refills of your 20-ounce soda of choice the same small price since Reagan was in office.

The $1.50 price tag is especially impressive when you consider Costco hot dogs are the size of a souvenir baseball bat. While an Oscar Meyer wiener weighs just 1.58 ounces, the Costco dog clocks is an absolute unit, clocking in at 4 ounces. And, most importantly, Costco dogs just hit different.

A 2018 article titled ‘The Enduring Enigma of Costco’s $1.50 Hot Dog and Soda Combo’ from Mental Floss is going mega viral on Twitter today for how bullish Costco co-founder and former CEO Jim Sinegal was in keeping the price the same, by any means necessary.

absolutely losing my mind over this pic.twitter.com/LM0vaPvnVM

When Costco president W. Craig Jelinek once complained to Costco co-founder and former CEO Jim Sinegal that their monolithic warehouse business was losing money on their famously cheap $1.50 hot dog and soda package, Sinegal listened, nodded, and then did his best to make his take on the situation perfectly clear.

“If you raise [the price of] the effing hot dog, I will kill you,” Sinegal said. “Figure it out.”

costco stock trending up on news of their hot dog policy. other companies take note! pic.twitter.com/wl8zLCAbbo

Costco ended up maneuvering around a price hike by not being a sheep to the market, but instead pricing their own cost and according to the value the hot dogs can afford them.

In 2009, when supply costs were on the rise, Costco moved away from Hebrew National and decided to move hot dog production in-house, building a Kirkland’s Signature hot dog plant in Los Angeles and another in Chicago.

Costco sells over 100 million hotdogs annually, and after stumbling across this information today, I will personally account for 50 million of those.