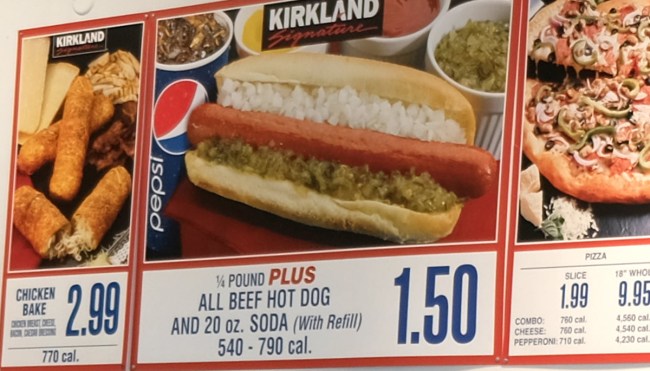 It’s been close to 40 years since the first Costco location opened its doors in Seattle, and if you’ve never had the chance to pilot a giant grocery cart through the aisles of one of its magical warehouse wonderlands, it may be hard to understand how the chain has managed to cultivate the devoted cult of customers it boasts.

There are a number of things that set Costco apart from the rest of the retail pack: the membership card you must flash to enter that fosters a laughably inflated air of exclusivity, the equally hilarious quantities you’re required to commit to if you’re hoping to buy certain products, and the steep discounts built into its bulk-pricing model (especially those sporting the hallowed “Kirkland Signature” label).

However, there’s arguably nothing more notable than the reward that awaits shoppers at the end of a long visit: the massive hot dog and accompanying fountain drink the food court has offered for $1.50 since 1985.

The reason Costco has never increased the cost of that value meal is pretty straightforward: its co-founder and former CEO said he will kill anyone who adds a single cent to the price tag.

As a result, it’s easy to understand why people felt like the sky is falling on Wednesday when the Twitter account @Breaking911 (an unverified and unaffiliated news aggregator largely viewed as a trusted and reliable source on the platform) seemingly announced Costco was raising the price of its iconic hot dog combo by $1 due to inflation.

It didn’t take long for the tweet to go viral, as it was quickly spread with the help of a number of high-profile accounts (including Darren Rovell). 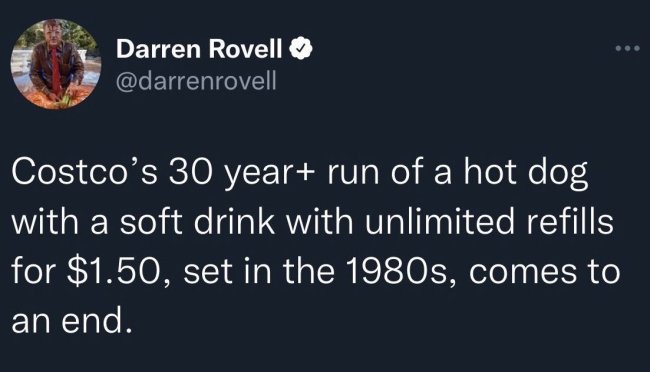 However, as anyone who bothered to take two seconds to look at the handle could easily see, the tweet was sent out by longtime s—tposter @JohnWRichKid, who’d simply changed his profile picture and display name to match those of Breaking911.

The best part is he’d revealed he had something up his sleeve on Tuesday before executing the ruse, and he ultimately posted a video featuring all of the rubes that fell for it after it went viral.

However, the most intriguing part of the entire saga was the very real impact the fake tweet appears to have had, as it didn’t take long for people to realize Costco’s stock went into a 13% nosedive that occurred right around the time the tweet began to get picked up by bigger accounts.

A meme account tweeted a fake headline that Costco was raising the price of their hot dogs due to inflation, and Costco's stock crashed 13%. You can't make this up. pic.twitter.com/gluBH5orcK

Well, this is historical & unusual.

And weirdest of all, there was an influx of puts RIGHT in the AM on the news.https://t.co/Qu5zzYL3b4 pic.twitter.com/yOnzKBaScF

It is worth noting Wednesday was a bit of a bloodbath for a number of retail stocks courtesy of a Target earnings call filled with underwhelming news that took place during the morning and subsequently sent prices spiraling downward across the board. As a result, there’s no telling exactly how large of a role the fake tweet played in the drop.

With that said, I want to believe.