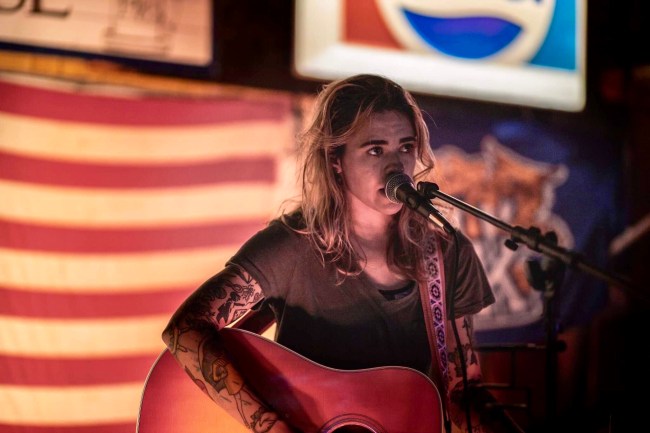 If someone asks whether you’re a fan of “Morgan Wade,” you might think they are referring to a new big and tall women’s fashion brand. But alas, Wade has no relationship to high quality Lycra pants or breathable tops.

A native of tiny Floyd, Virginia – where on Friday nights you can hear Bluegrass pouring out of the Floyd Country Store and summers are highlighted by next week’s FloydFest and September’s Yoga Jam – Wade is a rather humble, fast-rising singer-songwriter in the alt-country music scene.

“I originate from the big ol’ city of Floyd, Virginia,” she said. “And by ‘big’ I mean one stop light.”

At age 19, the diminutive Wade put together her first band The Stepbrothers through Craigslist and began cutting her teeth playing any gig she could land in southwestern Virginia. What ultimately emerged was a rollicking, gritty, country rock sound that is evident in the band’s first single, “Party Is Over,” which feels like one of Jason Isbell’s heaver anthems. That was quickly followed by the full-length album, “Puppets With My Heart” (which sadly has no Muppets references) and then the single “Carry Me Home.”

But those recordings were just a precursor what was next. Now playing without The Stepbrothers, Wade is preparing to release a five-song album with Grammy Award-winning producer Sadler Vaden, best known for his work with Isbell’s backing band, the 400 Unit.

“Part of Jason Isbell’s road crew caught my set at FloydFest last year and gave Sadler a record,” Wade said. “He got in contact with me a few days later, and then a week after that we were Skyping and playing songs. Then I went out and met with him in Nashville and we meshed really well. He has basically taken me under his wing and understands my vision and supports me.”

Vaden was quickly struck by Wade’s style and her unique, gravely voice.

“I was immediately interested when I heard her voice,” he said, comparing Wade’s voice to Melissa Etheridge. “I thought she already had a great amount of style and uniqueness to her singing. That’s really important to me.

Like many artists, Wade is a complex soul with diverse interests that inspires her music. Her Instagram page paints an intimate, fun-loving portrait of a heavily tattooed, running-obsessed, family focused musician.

“Since I got sober, I’ve found more things to get involved in outside like hiking, running, and biking,” she said.

Musically, much like Sturgill Simpson – who has often professed admiration for a diverse range of musicians including Frank Ocean and Fantastic Negrito – Wade’s tastes stray from what you might imagine after listening to her.

“I am really into Billie Eilish, Ivan B, and Mø,” she said. “I like a lot of pop and electronic stuff. I can tell you who I am listening to right now, who I admire and that pushes to get better with writing – Halsey, Julia Michaels, Miley Cyrus, Shawn Mendes, Lana Del Rey, Rainbow Kitten Surprise and Blue October as well.”

The question for anyone trying to get ahead music today is the how – how does an unknown, power-packed country rocker from tiny Floyd, Virginia, navigate through a challenging landscape that is dramatically different from just a few years ago?

“Music is continually evolving and that will continue,” Wade said. “People are hungry for real stuff – lyrics and music that they can connect too and apply to real life and their own experiences. One thing that I am learning is to focus on my own path. Each person moves forward in their own way. What may work for me might not work for the next person and vice-versa.”

Vaden believes in a world where American Idol and The Voice are launching unknowns into stardom, the formula is rather simple.

“I think it all comes down to how good your songs are, timing, and people being able to access it, he noted. “Accessibility is easier than ever now but there is a lot of noise because of it. Building a team around you that can help cut through can be really beneficial to an independent artist like Morgan. Shows like ‘American Idol’ work for a little while but most singers that end up there do just that.”

Whatever that magic formula might include, Wade certainly seems to have some semblance of it as she blazes her own trail from Floyd to Nashville and beyond.