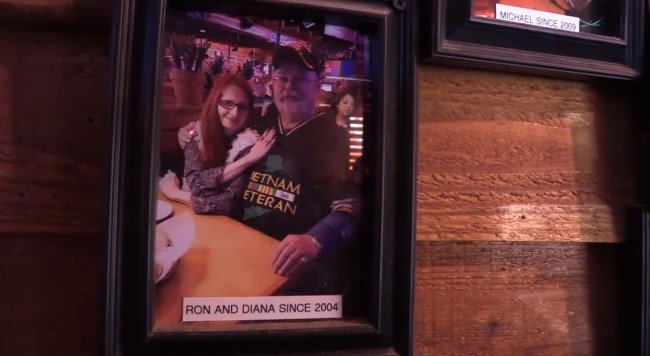 You may think you’re a “regular” at your favorite restaurant, but you’re not even close to being considered a regular compared to Ron and Diane Watson. The couple from Kansas eat the exact same meal from the exact same restaurant six days a week.

The Watson’s have been dining at their local Texas Roadhouse restaurant in Wichita… 6 days a week… for the last 15 years… in the same exact booth… with nearly the exact same dinner every night.

Since 2004, Ron and Diane take advantage of the Roadhouse’s early bird special, which is available Sunday through Wednesday between 3 pm and 5 pm (they usually arrive at 3:15 pm). The Texas Roadhouse linner is their only meal of the day and Ron says he has lost weight by dining there, but only after cutting out the delectable free yeast rolls.

Around Christmas, the Watson’s capitalized on a holiday special that offered a free shrimp appetizer on every visit for a year with the purchase of a $200 gift card. It has more than paid off according to Ron. “We’re going to eat 1,560 shrimp this year,” he said. Ron cuts the five shrimp in half and shares them with his wife before dinner.

Diane orders the “Roadkill,” a 10 chop steak smothered with sautéed onions, sautéed mushrooms, and jack cheese. As her two sides, she goes with a house salad with Ranch dressing, no tomatoes, and a baked potato with no salt. She usually gets the tall 5:02 Amber Ale by Wichita Brewing.

Ron almost always orders the barbecue chicken breast, but on occasion will spice it up and get the pork chop. For his sides, he gets mashed potatoes with brown gravy and an iceberg lettuce salad with Italian dressing. Recently, he found out he likes sweet potatoes, so that has been added to the regular rotation. The waitstaff knows that Ron always orders a water with lemon.

Ron not only enjoys the food and service at Texas Roadhouse, but he is a Vietnam Veteran so he gets 10 percent off his bill for the military personnel discount. Another reason Ron likes Texas Roadhouse is because he is still battling PTSD from his military days. He likes the routine of it all and knows that he will sit in the same booth, table #412, which gives him a good view of the door and everyone coming and going. Shame, over four decades since the Vietnam War and this veteran is still scanning entrances waiting for the bad guys.

The Watson’s have been married for 20 years, and Ron believes that his wife shouldn’t have to cook after a long day at work. Plus, Ron admittedly is not a great cook. So they eat out seven days a week, they skip Saturdays because Diana works late and Texas Roadhouse is too crowded when she gets off. They have a special Saturday restaurant they go to named Hog Wild.

Ron says they spend $22 a day eating out, and that it isn’t that much more than cooking meals at home. Plus, there is no waste, time spent cooking, and cleaning up. “It’s just about as cheap as going to the grocery store, buying your groceries, coming home, heating up the kitchen and doing the dishes,” Ron said. “If your time’s worth anything to you, it’s about the same as eating at home but you get a lot better service.” They’re spending about $6,864 a year at the steakhouse chain, you’d think Texas Roadhouse would throw them a free ribeye steak a month or something.

Not to mention that Ron and Diane have their photo on the “wall of fame” at the restaurant, acknowledging they are one of the most loyal customers. “They’re kind of like our unofficial mascots,” manager Kyle Hauber said. “Everybody talks to them.”

What pressure it must be to be a new cook at this particular Texas Roadhouse establishment. You’re cooking for a guy who knows exactly how the food is supposed to taste and is best friends with the manager. We should all enjoy such a true love story and daily steak. I’m still dealing with the fact that they purposely don’t eat the Texas Roadhouse rolls.

Why ain’t nobody tell me about the bread from Texas Roadhouse?! pic.twitter.com/3pjULwX8Pl