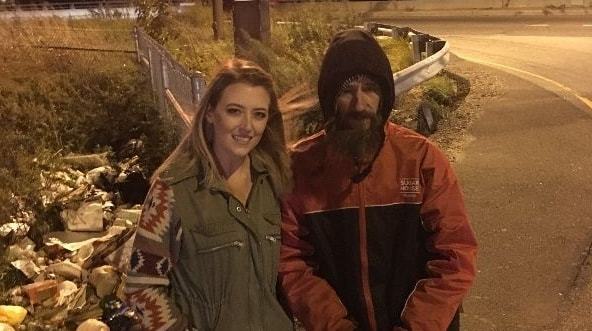 Yesterday, we brought you the unsettling news of a homeless veteran and a New Jersey couple cooking up a viral sob story to scam people out of $400,000 via a GoFundMe account.

The story, which blew up around Thanksgiving of last year, purported that a homeless veteran coughed up his last $20 to buy gas for a stranded motorist who was on empty.

The woman, named Kate McClure, started a faux GoFundMe that raised over $400,000 for the residentially-challenged Johnny Bobbitt, money that would be blown on luxury items and gambling trips that included a baller New Year’s trip to Las Vegas, claims officials. It has also been revealed that McClure’s boyfriend, Mark D’Amico, was also in on the swindle. The three people involved are expected to have charges including conspiracy and theft by deception filed against them.

According to NY Post, the couple had already known Bobbitt for a month before cooking up the tall tale, as they constantly saw him panhandling by an underpass during their frequent gambling trips to Philadelphia’s SugarHouse Casino.

What’s ironic is that their initial interactions with Bobbitt were kind and honest, giving him money or a hot cup of coffee when they’d see him.

“Dude I just thought about him!!” replied D’Amico, 39, as the conversation turned to ways to help out the 35-year-old former Marine: Food, clothes, a Nintendo Switch, even a job and a house.

That’s when the altruism turned to pure greed.

Just an hour after the campaign went live, Kate McClure came clean to her skeptical best friend that the story was bogus.

“The gas part is completely made up … but the guy isn’t,” she texted to the friend, whom officials didn’t identify by name. “I had to make something up to make people feel bad … So, shush about the made up part.”

Bobbit reportedly bought a home, got a job offer from Amazon, and tried to fight a drug habit while Kate and Mark negotiated a book deal.

A text message from Kate to her friend was outed by authorities:

“My mother just called me and said that people go to jail for scamming others out of money. So there’s that,” she texted her friend. “That’s what my own mother thinks of me.”

The couple took the majority of the $367,108.81 they received after GoFundMe (sans GoFundMe processing fees), while Bobbit claimed he only received $75,000.

Meanwhile, the couple spent the lion’s share on everything including, but not limited to, the following:

As money began to dwindle, D’Amico and McClure began arguing in text messages that have since been made public:

“Twenty thousand [dollars], BMW. Five thousand, Disney [World and Land trips]. Ten thousand in bags. We both went to Vegas, right?” D’Amico wrote. “Like you act like you didn’t spend a dollar.”

McClure’s friend even warned her in March to come clean after their excessive greed could bite the couple in the ass.

“You really need to get rid of [Bobbitt] and get the public off your back by donating,” McClure’s friend warned her in March. “He could out you.”

McClure replied, “I’ll be keeping the rest of the money, f–k you very much.”

Bobbit eventually took the couple to court, which in hindsight was an idiotic move considering he was complicit in the crime. Now, the trio faces crimes punishable by five to 10 years behind bars.