The Court Of Owls Could Be The REAL Villains Of ‘The Batman’: Here’s Who They Are 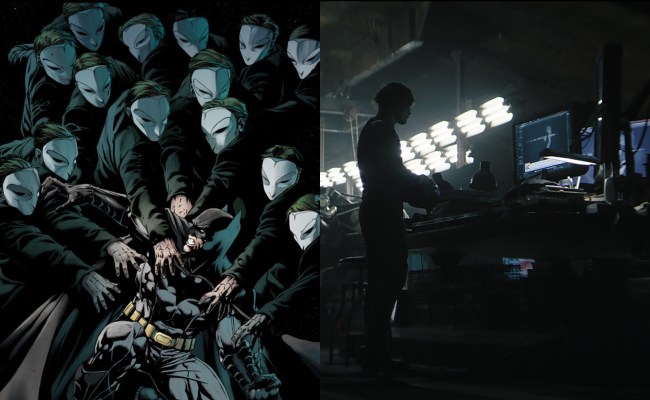 Do you want to see Joker in this new Batman franchise? I’m not sure the answer is all that obvious.

Naturally, yes, of course you want to see one of the most iconic villains come to life as often as possible, especially in a cinematic universe that seems to be as disturbed as the one Matt Reeves is building. But at what point does Batman vs. Joker become tired? Overplayed and reimagined one too many times. Can it ever? Probably not. But when it comes to Batman, there are quite literally dozens of characters that are worthy of their own time in the spotlight.

From Ra’s al Ghul to Bane, from Mr. Freeze to Two-Face, from Hush to Mad Hatter and Red Hood to Deadshot, Batman’s rogue’s gallery is more robust than any other comic book superhero. In fact, if I were to ever be given the chance to write a Batman movie, it’d feature these three villains: Black Mask, Deathstroke, and Hugo Strange.

And finally, with Matt Reeves, it appears that the Dark Knight has a director who’s in no rush to introduce the Clown Prince of Crime. Instead, Reeves seems to be hinting at a newer, lesser-known Batman villain: the Court of Owls.

First introduced in 2011, the Court of Owls is a secret society of criminals who, since Colonial times, have controlled Gotham City from the shadows. Made up of Gotham City’s oldest and wealthiest families, the Court of Owls use both their influence and outright violence to affect their will on the city.

A relatively new addition to #Batman canon, The Court of Owls are effectively the “illuminati” of Gotham City. pic.twitter.com/Q1U1tz4Dt1

As I discussed in my trailer breakdown, the “post-credit” moment of the trailer features a mysterious voice telling Bruce that he’s “part of this too.” What is this? We don’t know. But what the moment tells us that whoever Bruce is speaking to, they seem to indicate that they’re in control of the situation to such an extent that they can and will manipulate Bruce in being “part of” whatever this is.

RELATED: Breaking Down Every Moment Of The Incredible Trailer For ‘The Batman’

Combine that with Riddler leaving Batman a card with an owl on it and his apparent obsession with exposing the “lies” behind the powerful in Gotham and you have a rather decent amount of evidence pointing to the Court of Owls being a major factor in Reeves upcoming franchise.