Breaking Down Every Moment Of The Incredible Trailer For ‘The Batman’ 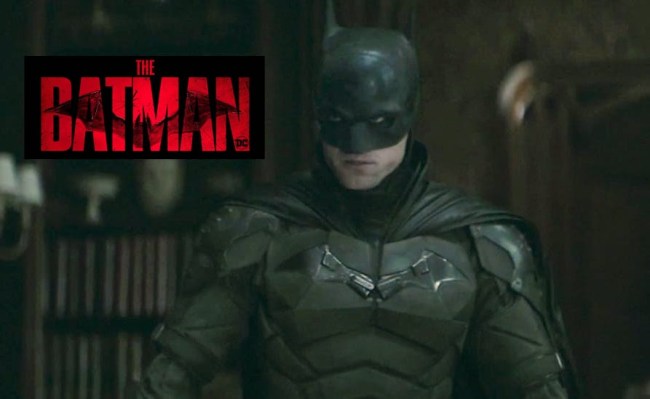 While it’s been an admittedly difficult year for movie lovers, this past Saturday, fans around the globe were provided with a much-needed reprieve, as Warner Bros’ and DC Comics’ epic DC FanDome event not only delivered but exceeded fans’ wildest expectations, particularly when it came to the highly-anticipated trailer for The Batman.

The Batman, which began shooting earlier this year before being forced to suspend production, has reportedly only completed about 25-30% of its filming, at least according to director Matt Reeves. Still, despite only having about a quarter of the film to work with, Warner Bros. was able to deliver the first epic trailer for The Batman.

As a lifelong Batman fan, this trailer was everything I was hoping for and then some, so let’s dive into the details and breakdown every frame and moment of this stunning first trailer for The Batman, which hits theaters next October.

Setting up Paul Dano’s Riddler as the main villain, the first trailer for The Batman is making it quite clear that this new Riddler is a far, far cry from the one Jim Carrey gave us a quarter-century ago. Wrapped up head-to-toe in what appears to be bubble wrap underneath his mask and jacket, Dano’s Riddler is far more of a serial killer than he is a riddle-obsessed trickster.

Like I said, big serial killer vibes. Focusing on the word “lies”, Riddler’s goal seems to be exposing some sort of hidden truth about either Batman or Gotham City (more on that later).

Jim Gordon and the GCPD

As is tradition, while Jim Gordon seems to understand that The Batman is an ally, the rest of the Gotham police force seems to be far less receptive. Still, Gordon — the only cop worth a damn in Gotham City — knows that their best weapon in the fight against evil is The Batman.

To the Batman: What does a liar do when he’s dead? He lies still.

The Court of Owls? 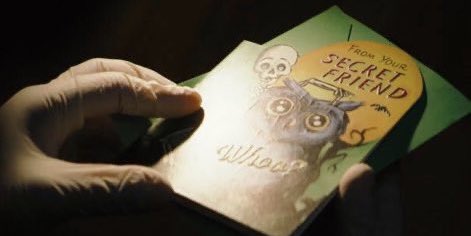 On the front side of Riddler’s card to The Batman appears an owl that look’s mightily similar to the Court of Owls, who are effectively the “Illuminati” of the DC Comics universe, controlling Gotham City from behind the shadows. Could the Court of Owls be the “lies” that Riddler is referring to? Could he think that Batman is part of them?

RELATED: The Court Of Owls Could Be The REAL Villains Of ‘The Batman’ – Here’s Who They Are

A relatively new addition to #Batman canon, The Court of Owls are effectively the “illuminati” of Gotham City. pic.twitter.com/Q1U1tz4Dt1

There he is in all of his glory: Robert Pattinson’s Batman.

Another Shot of the GCP, Possibly Commissioner Loeb

Jim Gordon’s predecessor in the GCP, this brief shot of a news conference shows what appears to be Commissioner Loeb briefing the media on the latest brutal Riddler murder. In a subsequent shot, Pattinson’s Bruce Wayne can be seen keeping an eye on the proceedings.

In case you weren’t already picking up on the minimalist vibes of Robert Battinson, the new Batcave makes it clear that this version of the Dark Knight is all business and no-frills. You’re not gonna catch him at a lakeside penthouse railing bottles of wine (and probably cocaine) with a luxury lady of the night like Ben Affleck’s Bruce Wayne was, I can tell ya that.

Our Best Look at Bruce Wayne

When Bruce was a young boy, his father definitely took him into the city to see the marching band. And then he said “Son, when you grow up, will you be a savior of the broken? The beaten and the damned?” And Bruce listened, although perhaps too literally.

As mentioned earlier, I believe this is the same person who is pictured in the newspaper clippings from the earlier Riddler crime scene. What makes this moment fascinating, though, is that the Riddler either knows that Bruce is Batman or he’s attempting to draw The Batman out into the open.

Introducing Catwoman in her natural element (stealing people’s shit and lookin’ bad as all hell whilst doing so), the Cat and the Bat don’t seem to have developed any sort of romantic relationship just quite yet. They will, though, don’t you worry. In fact, it wouldn’t shock me if Catwoman was one of Batman’s few allies by the end of this film. 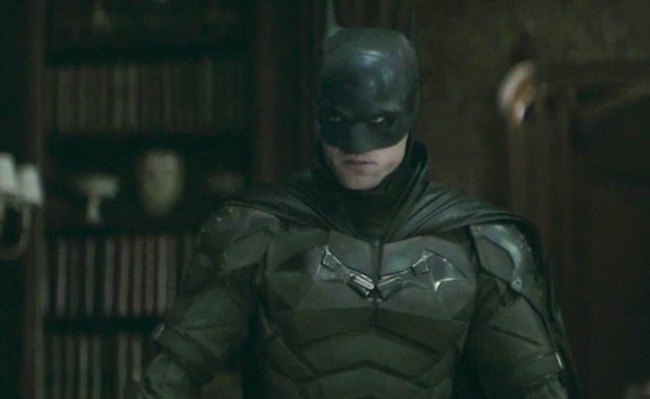 While I’m not crazy about the collar, everything else about this take on the Batsuit is an absolutely homerun for me, particularly the Arkham Knight-esque chest armor and the gadget-equipped forearms. He can also turn his head, which is always a plus.

In a trailer full of stunning reveals, this one was perhaps the most shocking: the man you see above you is none other than Colin Farrell. Truly incredible make-up work, here. Wouldn’t surprise me in the slightest if Farrell’s Penguin ended up being the film’s scene-stealer — this guy has become one of the best character actors around, just straight grinding this last decade: 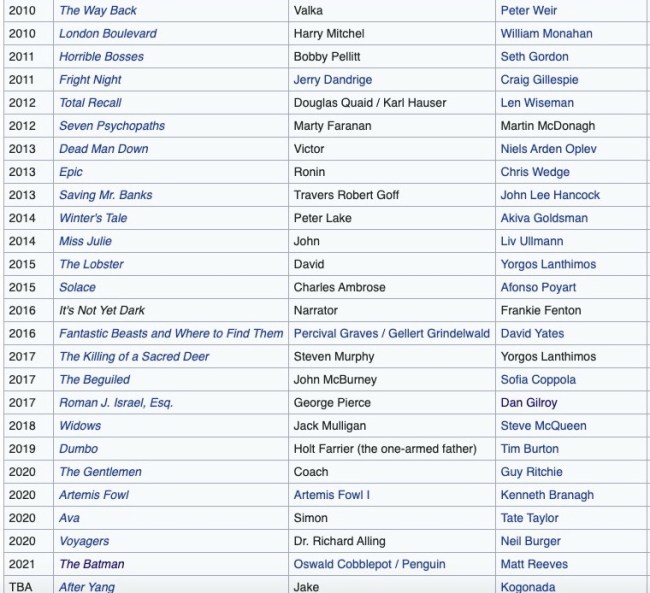 As Riddler can be heard riddling “if you are justice, please do not lie, what is the price for your blind eye?”, Batman can be seen brooding in the rain. And frankly, what’s a Batman trailer if it doesn’t include a shot of him brooding? (That collar, though – yikes!)

As you can tell by this here image of a bomb exploding directly in his face, Batman seems to have his hands pretty, prettyyyyy full with ole Riddles McGee. Also, Don! Whatever is going on in this scene ties directly into both the scenes of Riddler and the scenes of Bruce at a funeral. Who is Don, though? Well, he doesn’t seem to be based on any previously existing Batman characters, which means he’s likely a plot invention of Reeves’. Perhaps, given his obvious high-society status in Gotham, he’s part of the Court of Owls.

Looking scary as all hell, I might add. It can be argued that there’s no actor in Hollywood better equipped to play a genius serial killer than Paul Dano. Every time he pops up in a movie, he’s making your skin crawl. Could you imagine if this role went to Jonah Hill as originally intended? YIKES.

Speaking at DC FanDome, director Matt Reeves said that “Dano plays a version of the Riddler that no one has ever seen before” and that he thinks “it’s gonna blow people’s mind”, and I believe him.

Granted, while the main takeaway from the following scene is obviously Batman’s precision and brutality, I want to take a quick moment to talk about these thugs, but more particularly, who these thugs are repping.

Now, while there’s no sign of Joker anywhere to be found in this trailer, these face-painted criminals do like mightly similar to Joker henchmen that we’ve seen throughout various cartoons, comic books, and video games. Do I think Joker appears in The Batman? Absolutely not. In fact, I don’t even think he’ll be directly referenced. But the general vibe of these clownish thugs does give me cause to pause.

Are the thugs in #TheBatman🦇 trailer a hint that Joker already exists in Gotham City?🃏 #DCFanDome pic.twitter.com/WoyPHRyIiK

The hell are you supposed to be?

A little word to the wise out there: when a gigantic armored human bat approaches you, smugly asking what he’s supposed to be as your shithead buddy records a TikTok is probably not the best course of action.

That said, boy am I glad they did, because this is obviously *the* moment of the trailer.

McDonald’s employees to the McFlurry machine when no one is lookingpic.twitter.com/BR6PGWdKJh

DANK. Absolutely DANK. That’s all the analysis I’ve got for this one, folks: it’s dank AF.

If I had to guess which element of the trailer is the most divisive, I’m going to guess that there are some out there who aren’t a fan of the muscle-car-take on the Batmobile. I am not one of those people. For the world director, Matt Reeves seems to be building, a supped-up muscle car seems perfectly in-line with the rest of this Batman’s world. It also reminds me of the Batmobile from The New Batman Adventures (which was essentially Batman: The Animated Series with an updated look), which I’ve always thought wonderfully melded the look of a real-world sports car and an admittedly outlandish superhero vehicle.

Chaos In The (Gotham) Streets

The trailer closes with a rapid montage of action moments that features Batman being shot in the chest as close range, using his grapple, and chasing enemies down with his Batmobile. His pursuits are so intense, in fact, that even the clearly deranged Oswald Cobblepot lets out a gleeful “this guy’s crazy!” as the Dark Knight closes in.

This is it: the trailer’s “final” shot. And, man, I try not to be hyperbolic, but if this Batman movie continues down this promising course, it’ll likely rival The Dark Knight as the greatest Batman live-action movie of all-time — I’ve got that much faith in Reeves and Pattinson.

As the trailer closes, Bruce can be seen standing in the Batcave as a mysterious voice says “you’re part of this too.”

“How am I part of this?” Bruce responds.

While it’d be easy to assume that this voice belongs to Paul Dano’s Riddler, the whole “post-credit” vibe of the moment (remember, now, post-credit scenes are usually used to reveal surprises) makes me believe this could be an interaction with another foe, perhaps even the aforementioned Court of Owls, who — as I said — are in “control” of things and would, therefore, be the ones to make Bruce a part of whatever their plans are.