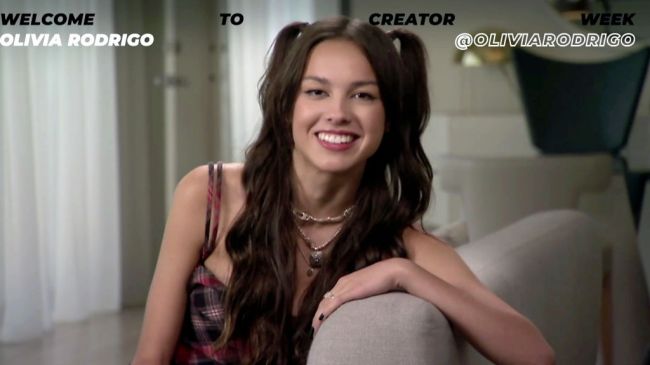 Courtney Love accused Olivia Rodrigo of stealing the cover concept of Hole’s Live Through This album. Rodrigo features a prom-gone-wrong concept on her cover artwork on the Sour Prom concert film that debuts on Tuesday that is similar to Hole’s 1992 album cover.

Courtney elaborated on the plagiarism claims against Olivia in the comments of her social media posts.

“She didn’t ask. So bit of both. I dig manners,” the former rock music star told a fan.

“It was rude of her, and geffen not to ask myself or Ellen von unwerth. It’s happened my whole career so i.d.c. But manners is manners,” Love said of Rodrigo.

Hole was signed to Geffen in the early 1990s, but the record label sued the band in 2000 over breach of contract. Olivia Rodrigo signed with Interscope and Geffen in 2020. Ellen von Unwerth was the cover photographer for the Live Through This album.

“Stealing an original idea and not asking permission is rude,” Love wrote. “There’s no way to be elegant about it. I’m not angry. It happens all the time to me. And he really [sic] I’m very gracious or say nothing. But this was bad form. That’s not bullying or bomb throwing. This persons music has nothing to do with my life. Possibly never will. It was rude and I gave [sic] every right to stick up for my work. Don’t gatekeep me! I’m honorable as f*ck to my fellow artists, and I expect the same.”

“It’s on Geffen (Rodrigo’s record label),” Love added. “I’ve informed her I await her flowers and note. I sure hope it’s long. Does Disney teach kids reading and writing? God knows. Let’s see. Yes, this is rude. Rage inducing? Honey if I had a dollar for everyone this happens? I’d be real rich!”

The 18-year-old Rodrigo responded with kindness, “Love u and live through this sooooo much.”

Love snarkily replied with a demand that Olivia buys her flowers and pen an apology, “Olivia-you’re welcome. My favorite florist is in Notting Hill, London! Dm me for deets! I look forward to reading your note!”

Courtney Love said on Facebook “Stealing an original idea and not asking permission is rude. There’s no way to be elegant about it. I’m not angry. It happens all the time to me.” pic.twitter.com/6eIzKVzDSb

RELATED: Courtney Love Says Prince Andrew Showed Up At Her House At 1 AM ‘Looking For Sex’ After Introduced By Jeffrey Epstein