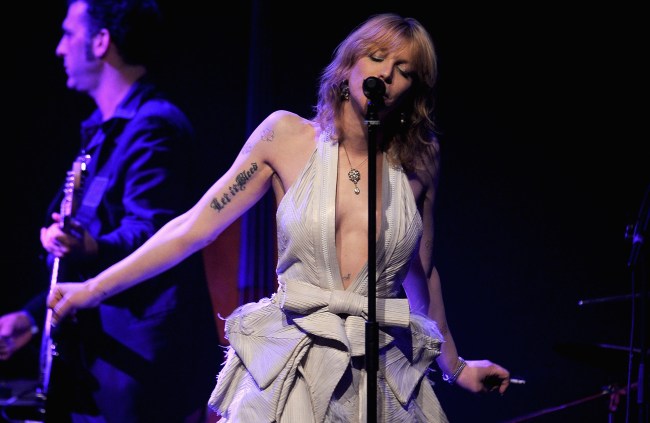 With the world attempting to make sense of the Jeffrey Epstein scandal following his suspicious death, Courtney Love has a story linked to the convicted pedophile. The former rocker and widow of Kurt Cobain claims that Prince Andrew randomly showed up at her house at 1 AM, and he was “looking for sex.” The two were initially introduced through Epstein, who was a close friend with Prince Andrew.

Love claims that she was introduced to Prince Andrew through Jeffrey Epstein. There are photos of Courtney and Andrew at the Los Angeles premiere of How The Grinch Stole Christmas in 2000.

Prince Andrew allegedly knocked on Love’s front door of her L.A. pad at 1 AM according to Courtney. She says that Prince Andrew told her he was “looking for a good time” and that maybe she could help fulfill that request according to a new report by The Sun.

Courtney reportedly told friends: “I was in bed when the doorbell rang at 1 AM, so put on my fluffy slippers and a dressing gown, and the Queen’s second son was standing there with a protection officer, totally unannounced.”

Courtney had not invited him over or ever gave the prince her address. “He said he had got my address from a mutual friend and was looking to have a fun night in Hollywood, and apparently I could show him a good time.”

According to report by The Sun, Prince Andrew “seemed to be looking for sex and was quite flirtatious.”

“I offered to make him a cup of tea, and thought it would be amusing to serve him it out of a vintage china cup with the Queen’s face on it. We found it funny,” Courtney reportedly said. After talking over tea for around 45 minutes, the prince allegedly left.

“Of all the things that have happened in my life, this truly is one of the most surreal things,” Love reportedly told a friend. And this is Courtney Love we’re talking about, she’s had some pretty interesting things happen in her life.

Apparently, these rumors have been swirling for over a decade, and in 2006, a spokesman for the prince said the gossip was “absolute nonsense.”

In a 2006 TV interview, the former Hole singer claimed that she also met the Duke of York in Hay-On-Wye, Wales, and that the royal came “looking for chicks.”

A bit more insight into the, um, interesting character that is the Queen’s second son.https://t.co/qjDMMghrem

There are photos and video of Prince Andrew at Epstein’s mansion in Manhattan from 2010, which is two years after the disgraced financier pleaded guilty to a state charge of procuring for prostitution a girl below age 18.

The video, which was allegedly filmed on December 6, 2010, shows Epstein and an unidentified young woman leaving the billionaire’s Upper East Side townhouse. Video also shows Prince Andrew inside the house, waving goodbye to a young woman in the partially open front door.

Epstein faced new charges of sex trafficking and conspiracy to traffic minors for sex on July 8, 2019. On August 10, 2019, the 66-year-old Epstein allegedly committed suicide in his prison cell at the Metropolitan Correctional Center (MCC) in New York City.

Courtney Love also warned women about alleged sexual predator Harvey Weinstein. In 2005, Love was on the red carpet for the Comedy Central Roast of Pamela Anderson. When asked if she had any advice to “a young girl moving to Hollywood,” Love first replied, “I’ll get libeled if I say it.”

Then she said, “If Harvey Weinstein invites you to a private party in the Four Seasons [hotel] don’t go.”

The 2005 clip went viral in 2017 when the Harvey Weinstein allegations came out in force thanks to the #MeToo movement. Love commented on the old video on Twitter and said, “Although I wasn’t one of his victims, I was eternally banned by CAA [Creative Artists Agency] for speaking out against #HarveyWeinstein.”

Although I wasn't one of his victims, I was eternally banned by CAA for speaking out against #HarveyWeinstein #rape https://t.co/8giwNkrC5t