The Crucial Lessons I Learned From My COVID-19 Scare 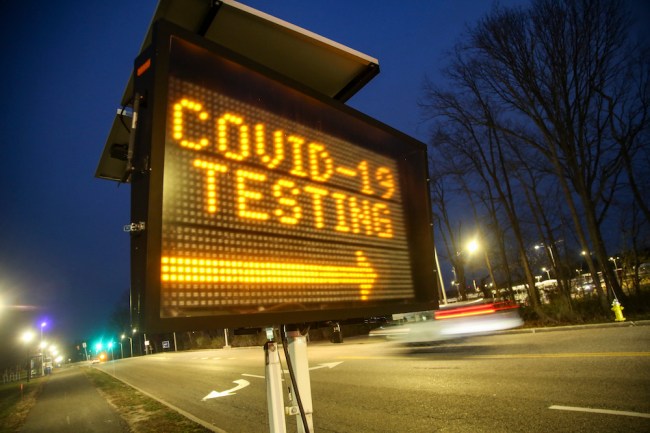 “This disease, called COVID 19, will be over much sooner than you think. Christian people all over this country, praying, have overwhelmed it.” – Kenneth Copeland

In fact, since all of this COVID-19 craziness started dragging the United States into ruins, I’ve been nervous as hell about it and taking it seriously.

As a germaphobe anyway, the idea that some mysterious virus — one that nobody seems to have any idea how gnarly it might be — could infiltrate my lungs and force me to spend the summer strapped to a respirator, well, that scared the bejeezus out of me.

So, when they said lockdown, that’s precisely what I did. I stayed home, had my groceries and beer delivered, and kept friends and family at a safe distance.

When the powers that be issued social distancing guidelines urging people to remain six-feet apart, I went something like fifteen to twenty. When they demanded that people wear masks when venturing outside, I adhered to that rule, too, even though I was fully aware of how stupid I looked in one of those godforsaken things.

And when the naysayers, conspiracy theorists, and radicalized imbeciles called the virus a hoax, I rolled my eyes, raised my middle finger, and kept on living in my post-apocalyptic bubble.

Why? Because I don’t trust any of them – not the health lackeys and damn sure not the U.S. government.

Even now that the nation is trying to weasel its way into some level of normalcy, I’m still not taking any chances. There’s nothing the world has to offer me right now that I can’t do without until some big brain puts a stop to the madness.

My motto in 2020 is: As long as I keep as far away as possible from the nose picking dregs of disgusting society, I shall not go down a statistic.

So imagine my surprise last week when I started to feel like I was coming down with something. At first, I just chalked it up to being a slight hangover – those have become a regular occurrence these days.

My lower back hurt, and I felt a little run down. Nothing too serious, just like I needed a nap from the time I crawled out of bed. “Not today, whatever you are,” I thought. I did everything I could to ignore that I might be getting sick. I even did a full hour and a half workout later that afternoon, despite my body telling me that it would rather sprawl out on the couch and not move.

That’s when I noticed that all of my muscles were weaker and more tender than usual. But again, I didn’t think this meant that the sickness had gotten a hold of me.

I’m in my 40s, so tired and sore are just part of the deal. It crossed my mind, though, that I had probably been drinking too much, staying up too late for too many nights and my body was screaming, “Yo! You’re burning the candle at both ends, bud, and you need a break.” It’s not like I had any choice in the matter.

The second I was finished with my last pushup, my energy was zapped to the point of immobility. The only time I got off the couch for the rest of the night was to race to the bathroom to keep from crapping my pants. I’m no doctor, but that’s when I knew something wasn’t right.

The next morning, there was no denying it – I was sick. Not just sick, but sicker than a dog, as the Southerners so eloquently put it. On top of being tired as hell, I had a slight cough, felt lightheaded, my chest was tight, and my body temperature was borderline schizophrenic.

I was hot, I was cold, then I was hot again. I felt like a snake going through the advanced stages of menopause. And it just kept getting worse with each passing minute. The muscle pain that I experienced the previous day didn’t have jack shit on what was happening then.

It had spread throughout my body, but unlike other times when I was sick, the achiness hit me differently. I was sore in random spots in my arms, legs, and even my fingers. However, it wasn’t until I felt like I couldn’t catch my breath that I got nervous.

That’s when my inner germaphobe, emetophobe, nosophobe and hypochondriac all ganged up on me and sent an SOS message to my brain that said, “You’ve been Rona’d, motherhumper!”

Having no other option, I sat down and scoured the CDC website to see if I had enough COVID symptoms to warrant concern. Out of eleven signs, I had seven – over half! I wasn’t just concerned at that point, I was flipping out, and what’s worse is I didn’t have any idea what moves I needed to make to keep from dropping dead.

We’ve all heard the horror stories about the millions of people coming down with the novel coronavirus – some are making it out alive, while others not so much. Still, I wasn’t sure what the protocol was for getting better.

I realize that some of you reading this are thinking, “Duh, dude, you needed a doctor.” And you’d be correct. But in my defense, I wasn’t thinking clearly. I just kept picturing that one scene in the movie “Outbreak”, where the military shows up at the homes of the sick and takes them away to die.

“That’s going to be me,” I thought, “I just know it.” I also couldn’t help but envision some of the horrific images I’ve seen of the Rona-stricken, some of which were reportedly healthy, just like me, when they got this virus, withering away in hospital beds with tubes coming out of every orifice of their bodies.

Yes, I needed a doctor – a team of them, actually — but I was far too busy getting dry-humped by a savage panic attack to make that realization.

It finally registered in my idiot brain that I needed some professional medical advice. So, I called my family doctor, thinking that as soon as I explained to them what was going on, they’d clear their schedules and perhaps have some kind of bubble bus sent over to rush me off to the nearest healthcare facility.

But no, that’s not how it went down at all. For starters, the doctor didn’t even want to see me unless I was half dead. Even then, my visit was going to be via virtual appointment because, well, those bastards aren’t trying to get snuffed out by this virus either.

The nurse practitioner I was talking to, Nichole, didn’t act like it was even a big deal that I had seven symptoms and felt like death. She said that I should just take some over the counter allergy medication and call them back in a few days if I didn’t feel any better.

Or, if I was feeling really uneasy about the possibility of having the Rona, I could always visit an independent testing site and get the brain swab. Either way, there was nothing they could do for me unless I got worse.

That’s the first thing I learned about the Rona – if you’re still well enough to use the phone, the doctors aren’t too worried about you. Only the patients who end up in the emergency room wheezing with their lungs in their hands get the kind of special life-saving treatment that I was hoping to receive.

But since I wasn’t quite that sick yet, the nurse practitioner (under the advisement of my doctor) felt I was better off suffering at home under a 10-day quarantine. It was still wise to contact them, though, since they had the most up-to-date information on the closest testing sites.

I just needed to see that part through on my own. And I needed to do it right away, if for no other reason than to get myself some peace of mind. After all, I was still in panic mode.

Fortunately, I was able to make an appointment to have a COVID test on the same day. I was sent to a nearby community center where a federal health company called Logistics Health Incorporated called the shots.

I must admit, the experience was a bit intimidating at first. Never mind what you’ve heard about the discomfort of actually taking the test. The real anxiety happens when you start thinking, “Holy hell, I may never get out of this place once I go in.”

The pathway to the processing area was all covered in clear plastic. It had a very drab, B-movie vibe about it, almost like I was just seconds away from being whisked off to the basement to be held captive until further notice. It was almost as though the complimentary test was just a way for the government to round up the infected and prevent the virus from spreading to the rest of civil society.

I waited patiently for a couple of camo thugs to snatch me up, but that never happened. Instead, a lovely nurse connected me with a technician at the other end of the room for the test. He explained that he would stick a swab up both sides of my nose to the point of discomfort, and that would be that.

Aside from watery eyes, it wasn’t bad at all. That’s the next thing I learned about the Rona – testing is easy, and the most painful aspect is waiting for the results.

The technician told me it would be two to six days before I learned my fate, and then he turned me loose. From there, I went home and ate soup, drank lots of water, slept, and binge-watched the British comedy Man Down on Netflix.

In 48 hours, a text message came across my phone alerting me that the results were in. I was COVID negative. Whew! If only STD tests were that easy to pass.

That’s another thing I learned from my Rona scare. Just because a person is sick and has a slew of COVID symptoms doesn’t mean they should panic, and it certainly doesn’t mean that they’re doomed.

We’ve had this COVID deal pushed so far up our asses over the past six months that we tend to forget that every other nasty virus that’s been making people sick since the dawn of time is still out there.

If you experience symptoms, however, you should get tested. Here is a list of places in every state where you can get a FREE COVID test. We don’t want to unwittingly spread this virus to someone who’s life could be gravely jeopardized if they catch it.

As for me, I’m busy tightening things up around the house. I don’t know how I got nailed with whatever sickness I had last week, but I’m taking my precautionary measures up a notch.

I just ordered several rolls of plastic, a hazmat suit and, what can I say, I’m about to go full-blown Howard Hughes up in here.