Craft Beer Fanatic Continues His Trek For 2,550 Beers Across America In Arizona And New Mexico 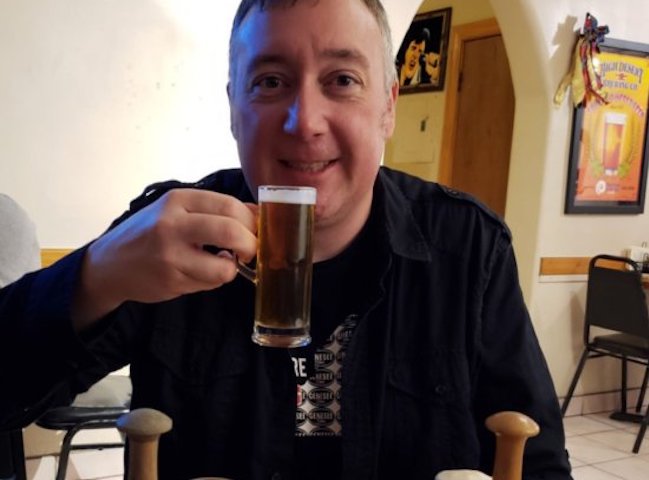 Some people are destined to do great things with their lives; play professional basketball, become a rock star, or discover a new planet. Your dreams are your destiny.

For me, I am destined to drink beer.

That is why this past year I launched Beer Goals in order achieve my destiny. 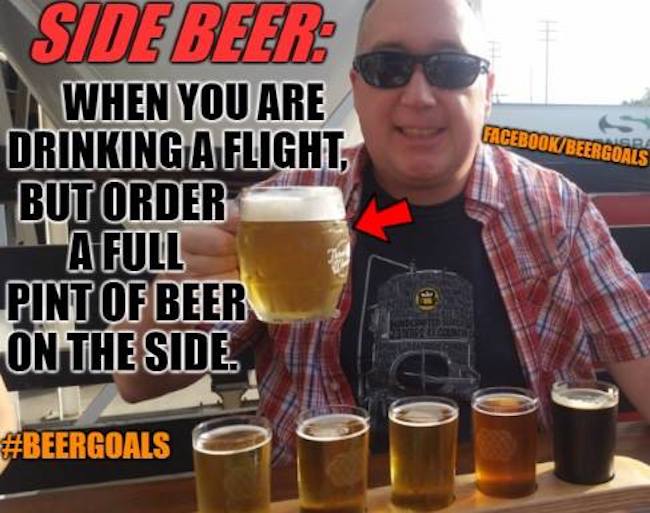 My first Beer Goal is to drink 50 different craft beers from each of the 50 states as well as Washington, DC, totaling 2,550 beers across the USA.

I have already happily drunken 50 beers from California and, as previously reported had a very successful Beer Goals “Beercation” to Oregon for my next 50. 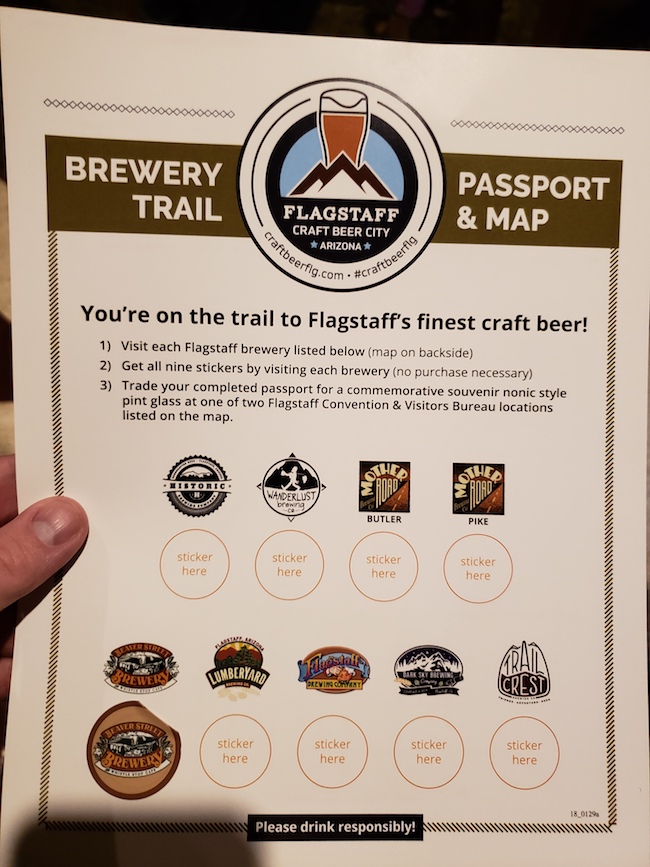 I got a beer sticker, yay!

This means it was time for a Beer Goals road trip. (Not at the same time, please drink well, drink safe!)

So, I set my sights on the great states of Arizona and New Mexico and packed the car with bubble wrap to take home some “beervenirs” before making my way to Flagstaff, AZ.

Both Arizona and New Mexico are beautiful, but I never realized how cold they could be during the winter.

Luckily, I had some fantastic beers at a variety of breweries – and hotel rooms- to warm me up. 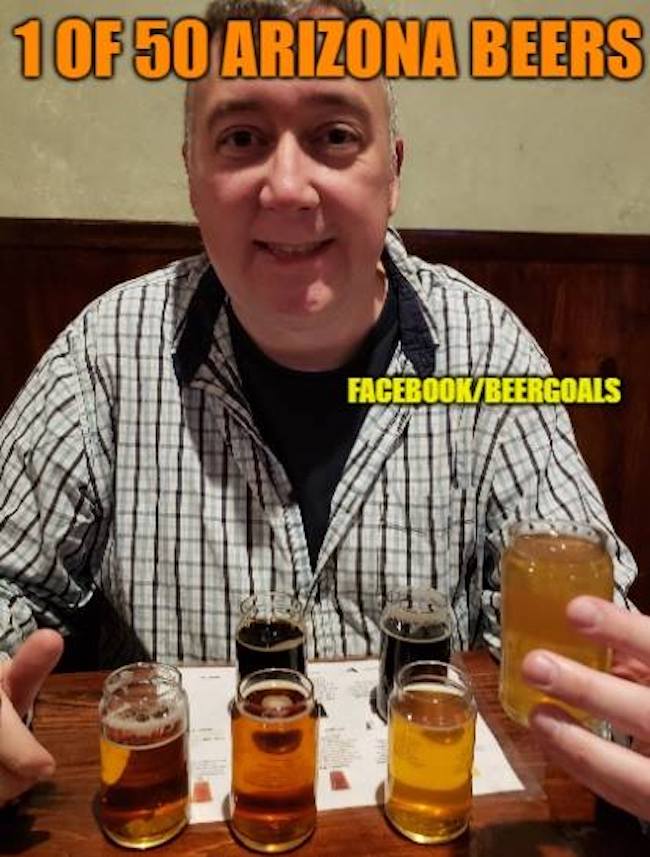 For my first Arizona beer, I hit Beaver Street Brewery in Flagstaff for a flight that paired well with a bucket of fondue.

As my dessert for traveling across the desert, I quenched my thirst with a Beaver Street Shandy; beer as if infused with lemonade, but much better than anything you can get at a stand. With a low ABV of 3.2, it eased me into the many beers to come.

Other highlights from this flight included a Conductor IPA, that conducted its way down my throat and the Black & Raz, that tasted like dark chocolate covered raspberries, making it all worth the eight hours in the car.

I was also very happy to try the Beaver Street version of the Sierra Nevada Resilience Butte County Proud IPA, that hundreds of breweries around the country have brewed with all proceeds going to benefit the Camp Fire Relief Fund in California. 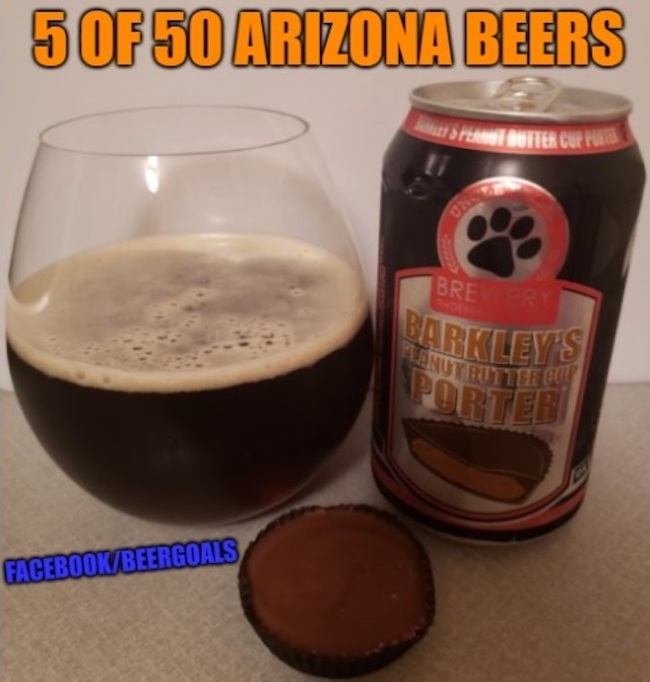 In-between breweries I found some good bottle shops that helped me load up on local offerings like this unique Barkley’s Peanut Butter Cup Porter from Uncle Bear’s Brewery out of Gilbert, Arizona which paired nicely with – you guessed it: a Kit Kat Bar.

While it is hard to do a sweet, candy-flavored beer, this one totally works. Turns out there is more than one way to drink a beer! 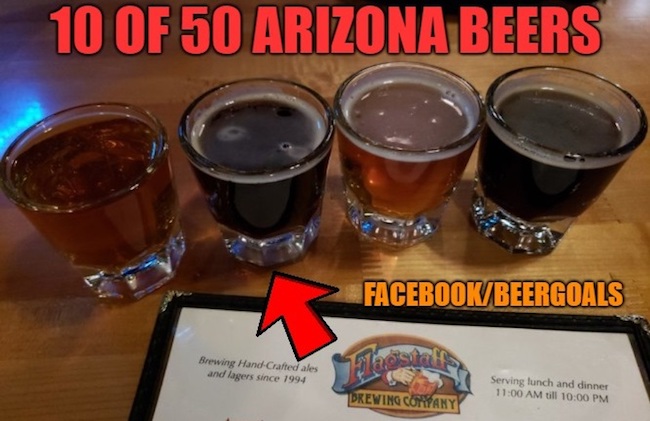 Next, I hit the Flagstaff Brewing Company for a flight that included this Blackbird Porter (at the red arrow), that had had a strong porter taste with notes of a porter.

Another Flagstaff Brew Co highlight was the beer on the far right, I am excited to have photographic evidence of The Sasquatch Stout! This bigfoot beer left a big impression on me as most good stouts are hard to find. And I apologize for what you are about to see, as it is an afront to craft beer lovers everywhere.

I drank a delicious Rail Head Red Ale from Flagstaff’s own Lumberyard Brewing Company inside of a blasphemous paper cup back at the hotel. 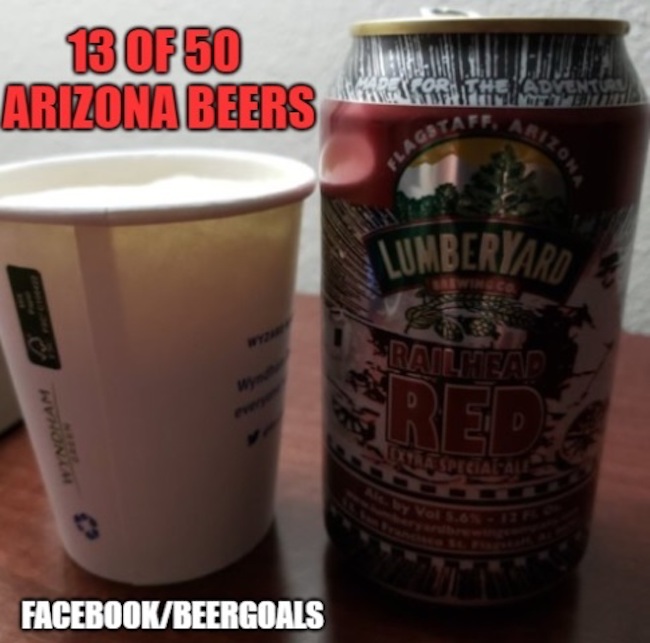 I love reds, and just like the Arizona Red Rocks, this red was beautiful but more importantly delicious despite my shameful act. As a form of beer snob seppuku, I should force myself to drink a Miller Light.

Luckily my honor was restored, while still in Flagstaff as I found the Historic Brewing Company where I enjoyed another flight of refreshing beers.

In my hand below is their unique and yummy Piehole Porter that went directly into my piehole. It actually tasted like a pie with a sweet aftertaste. I could imagine it pairing nicely with a slice of warm apple pie next Thanksgiving!

Another great beer from this flight included the Brandy Bear Arms that has a strong boozy taste, almost like cherry and rum. Woah! 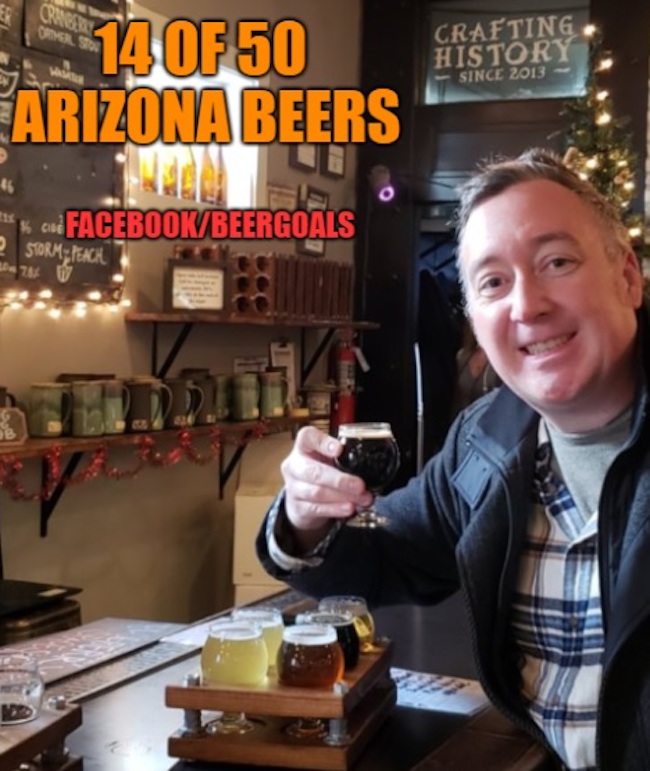 They discovered the former planet Pluto in Flagstaff at the Lowell Observatory, and I found that this beer town has some amazing breweries including The Lumberyard Brewing Company where I had the pleasure of imbibing this flight (along with my Side Beer!).

I loved their Red Rock Raspberry, and the Hazy Angel IPA was heaven. There used to be nine beers, now there are none. 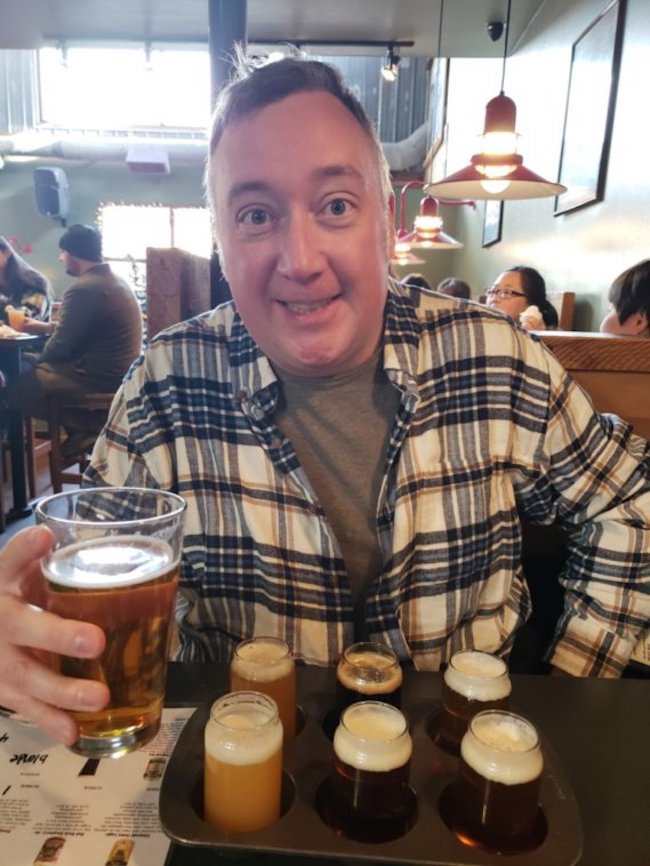 After drinking Arizona, I was off to New Mexico! First stop on my New Mexico 50 beer #BeerGoal was at the Blue Corn Brewery in Santa Fe, NM where along with a spicy, surface of the sun hot level burrito, ordered “Christmas Style” as they say there (half green sauce, half red sauce) – I drank a solid flight!

The beers included an Atomic Blonde IPA, a Road Runner IPA, and the Honey Wheat, which really stood out and helped put the fire out on my tongue. (You have not had spicy Mexican food until you have had NEW Mexican food.) 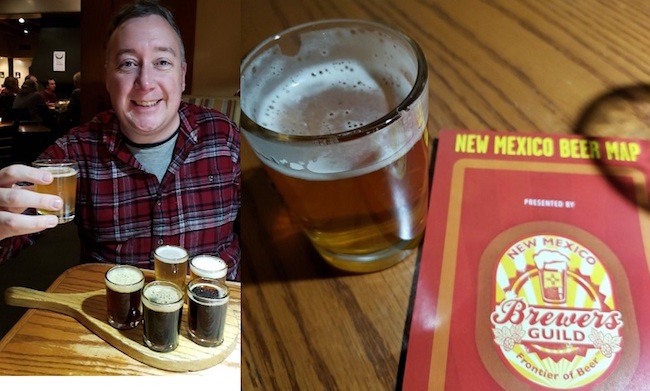 The next stop on my Santa Fe beer run was Duel Brewing where the only duel was between my mouth and the five delicious beers I was handed on a platter.

All of them were a spectacular introduction to the beers of New Mexico, but the standouts by far were the Fiction, which went down like candy and the Fantin, a double pale ale with a respectable 7% ABV. 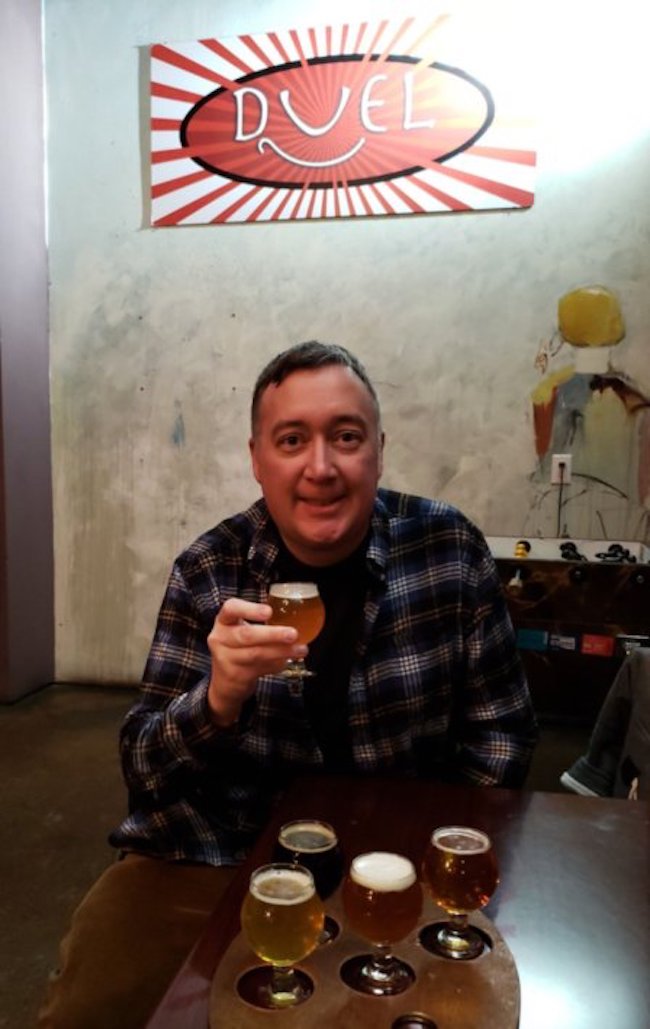 One of my favorite breweries on my Arizona – New Mexico Beer Goals road trip was High Desert Brewing in Las Cruces, NM. Not only did they have a variety of delicious beers (of which I enjoyed eight) they had great, cheap yet tasty food that went along with it.

The ultimate standout was a very uniquely New Mexico beer- a state known for growing chilis- the Rojo Ale was a spicy, red-colored chili-infused beer!

I have to admit that after a plate of nachos and a full flight, I was worried about the heart burn with this one, but it was worth it.

Other standouts included their Peach Wheat and the American Pale Ale. 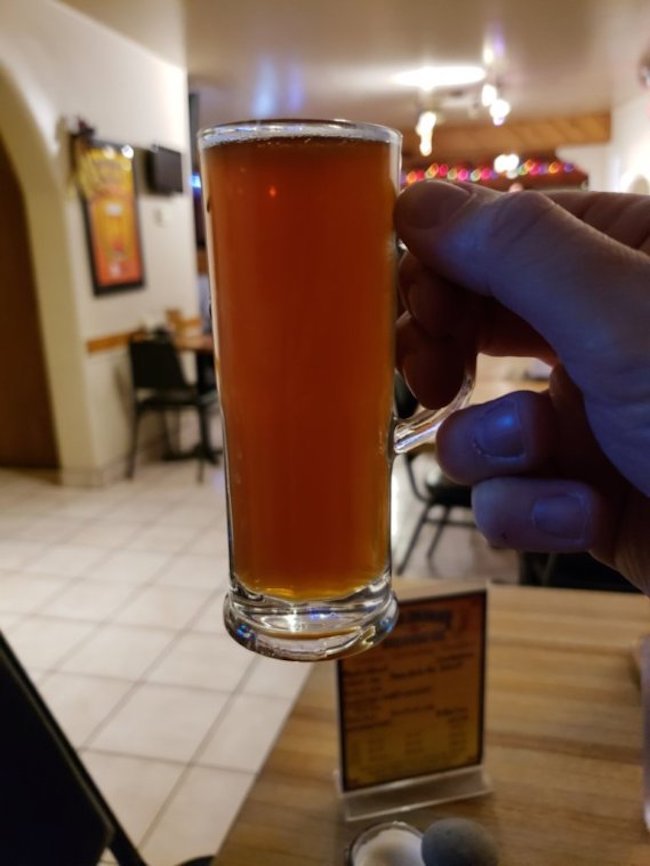 I couldn’t leave Santa Fe without grabbing some cans from the namesake brewery. The Santa Fe Brewing Company has a lot to offer including this Nut Brown. Another fav of the SanFe was the 7K IPA, which they say was “brewed at seven thousand feet” – the elevation of the city.

I guess I’ll need a parachute to come down from that one. 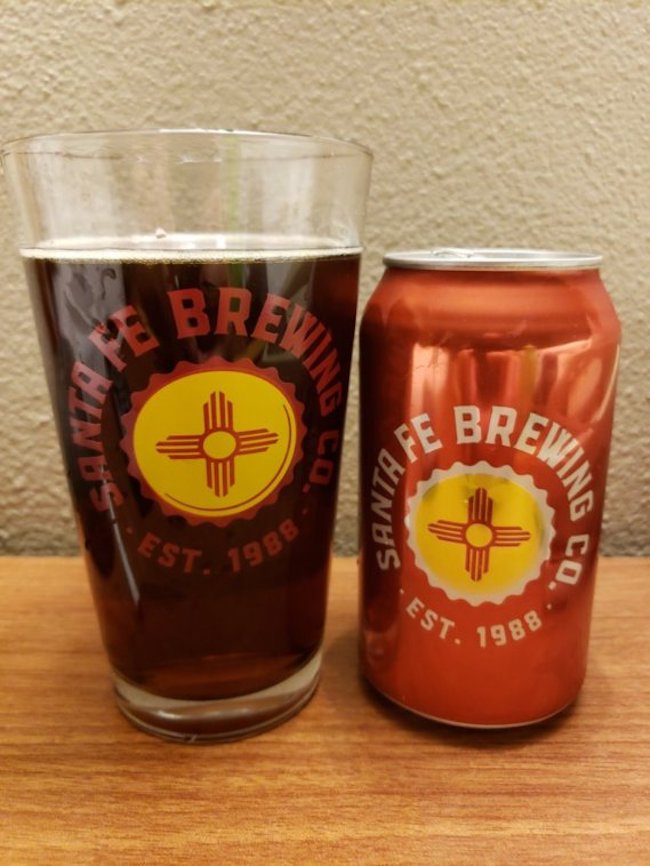 Next, I was off to Las Cruces where I enjoyed some beers from Little Toad Creek, like this Grumpy Old Troll IPA, that made me a happy old beer lover. I wish I had more time to do a flight from this brewery, but it was nice to stop and enjoy a pint. 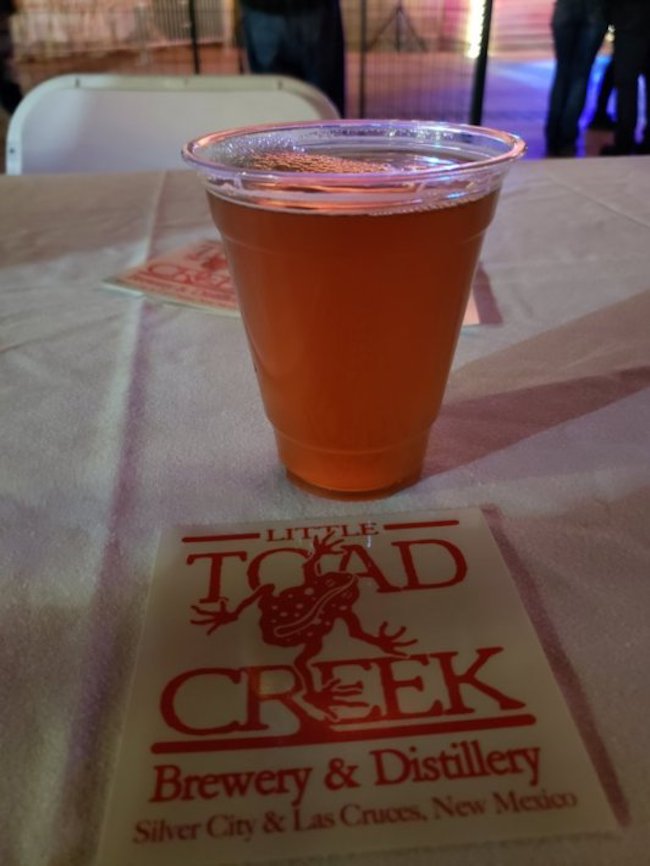 I took a break from the amazing New Mexican food and tried some local barbecue at The Ranch House with a side of beans, slaw and a beer flight from some of New Mexico’s finest.

In hand below is a Boneshaker Bitter from Second Street Brewery. It was smooth and malty, and luckily my bones are still intact. Another champ from this flight was straight out of Albuquerque: Tractor Brewing’s Milk Mustachio Stout which certainly gave me a beer mustache. 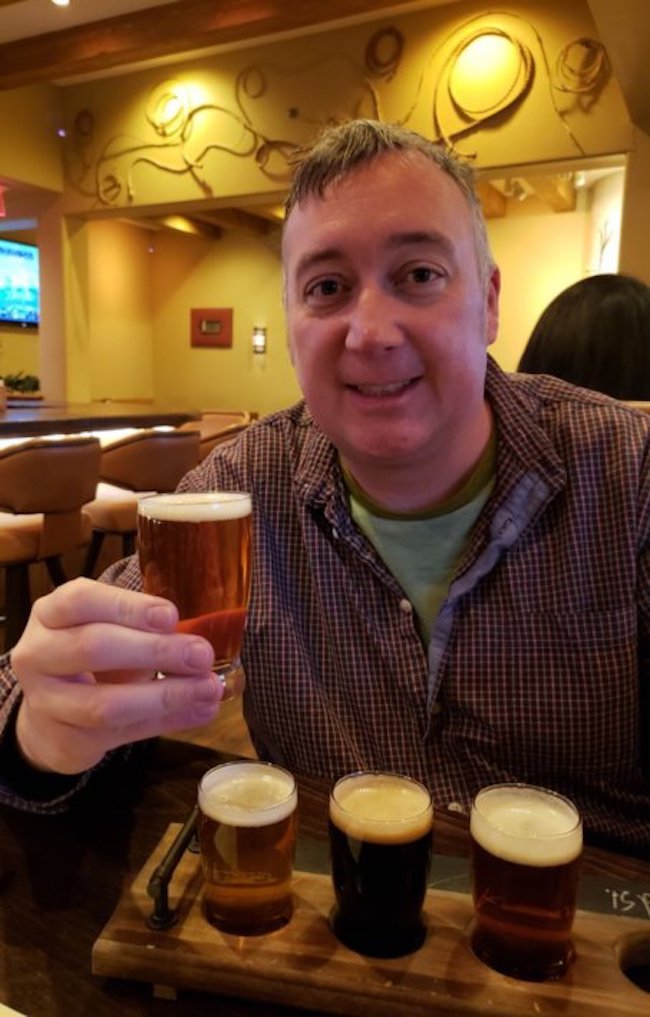 New Mexico has a lot of wide-open spaces for blowing things up, testing out rockets and spaceships and trying new beers.

Oh, and seeing aliens. That’s why I was super excited to go to Roswell, NM where any fan of The X-Files knows is the home of American UFO lore.

Not only do they have a full-fledged UFO Museum in the heart of town, but also their very own ALIEN themed beer! The truth is out there, and the reality is that this Alien Amber from Sierra Blanca Brewing Company is out of this world. 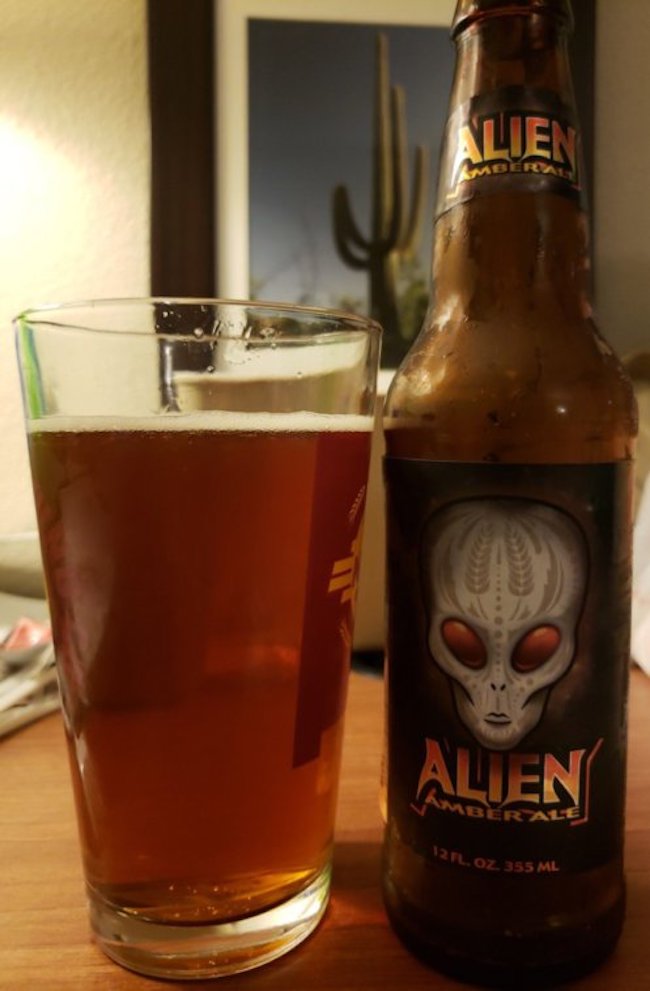 While the government will not be able to cover up the goodness of the Alien Amber beer, they can stop you from purchasing it on certain days.

Like my home state of New York, New Mexico has specific “Blue Laws” that prohibit folks from purchasing alcohol on Sunday; either part of the day or in some counties, all day.

This is what I faced while driving out of New Mexico on a Sunday and trying to wrap up collecting my 50 beers from the state, to complete my Beer Goal! 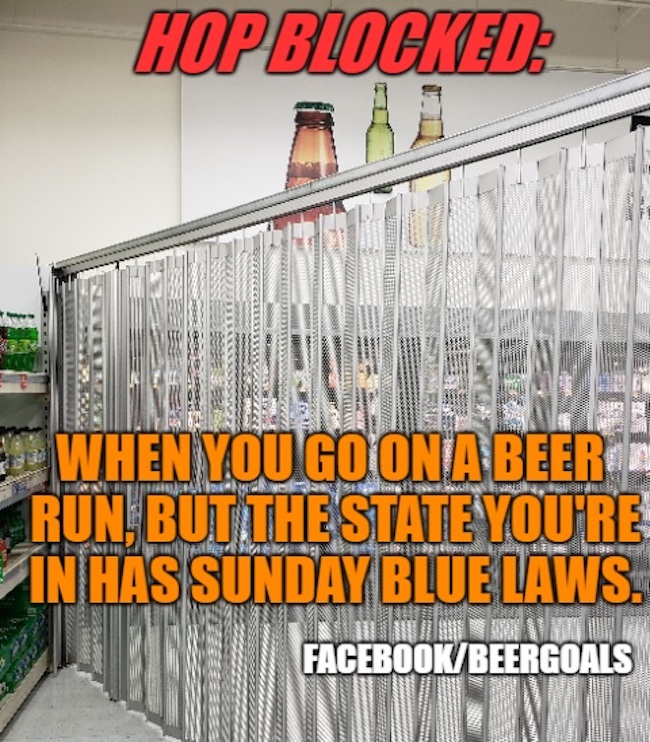 I haven’t even gotten to all my favorite beers from this trip like the Marble Brewing Double White Ale or The Prescott Brewing Achocolypse; there are only so many beers in the day.

What are your favorite beers from Arizona and New Mexico? Please Like or follow Beer Goals on Facebook and join our group to get more detailed reviews of these beers and more.