Meet The Craft Beer Fanatic Attempting To Drink 50 Beers From 50 States And DC – That’s 2,550 Beers Across The USA 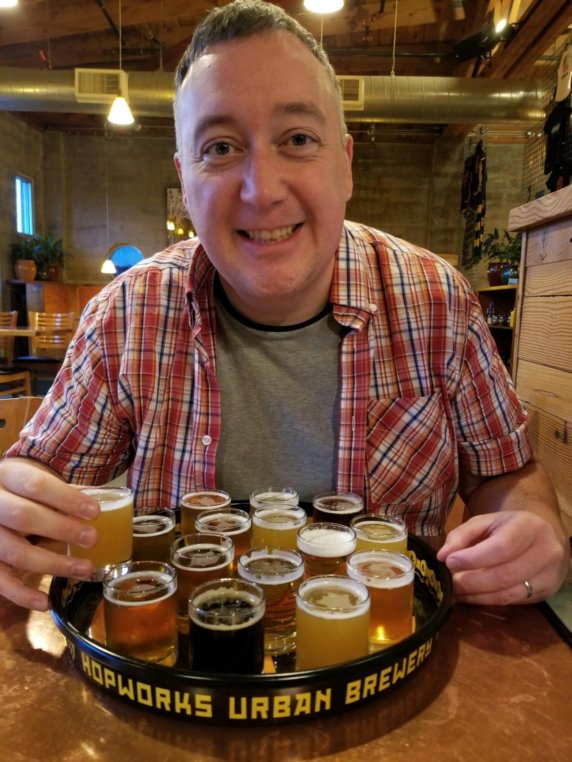 They say to do what you love and I love drinking beer. What kind of beer do I like to drink do you ask? ALL of them. I like IPAs, Pale Ales, Sours, Double IPAs – you name it! Unlike other guys my age I don’t really have a lot of what I consider to be “real” hobbies aside from watching bad horror movies and drinking beer.

That is why I have decided to embark on a new career path by setting different Beer Goals. My first Beer Goal is to drink 50 beers from each of the 50 states as well as Washington, DC, totaling 2,550 beers across the USA. This challenge came naturally as when I go to a new bar or brewery I get a bit OCD with wanting to try everything on the beer menu that I have never had before.

Most craft beer “snobs” hate to drink mass produced “piss water” brews, as do I. However, I also dislike drinking beer that I have already had before; as nutty as a peanut butter stout, I know.

In a way I have been setting Beer Goals my whole adult life. 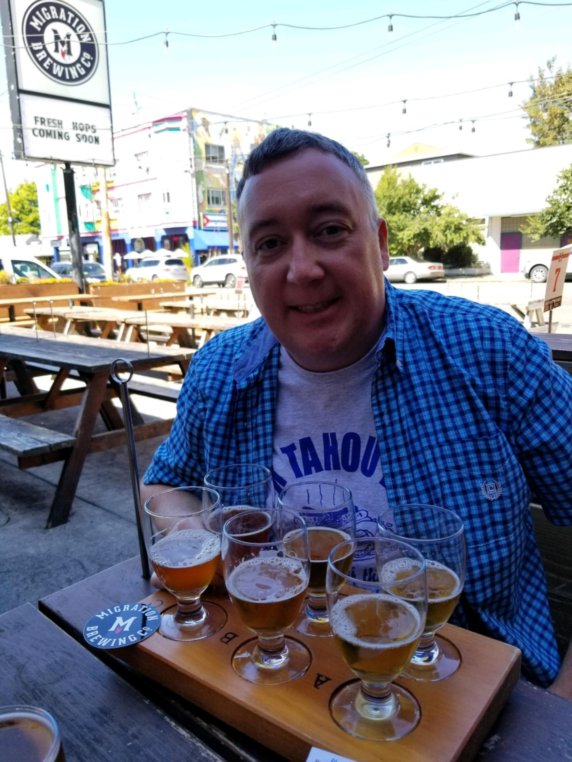 I live in Southern California and am treated regularly to the amazing offerings we have here including Stone, Ballast Point, Modern Times, El Segundo Brewing and lots more. So, while drinking California, I set out to conquer the great west coast beer scene. I went on my first Beer Goals trip to Oregon and hit The Beaver State hard visiting over half a dozen breweries and grabbing lots of bottles and cans along the way.

It was a great place to start. Portland is amazing, a brewery or brew pub around every corner full of fanciful beer flights. Over an extended weekend I was able to “drink Oregon” and complete my first 50 beers on my way to the magic 2,550… 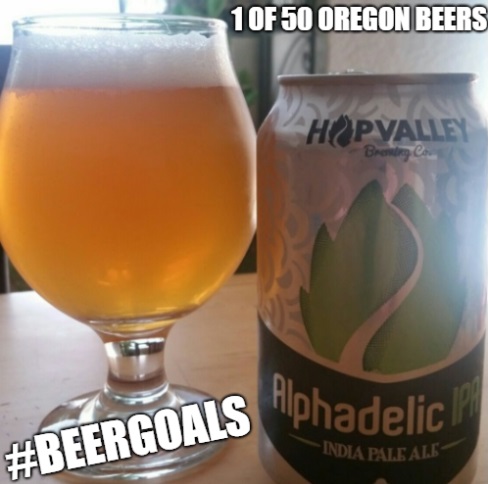 I started out with an Alphadelic IPA, from Hop Valley Brewing for my first Oregon craft beer. I would expect it to have a super potent hop flavor. However, this is a nice light IPA from the town of Eugene, that I can get behind. With some solid Beer Math I got a sixer for 10 bucks and it puts down a solid 7.2% ABV.

Sometimes I use what I call “Beer Math” – whereby I calculate the highest ABV beer for the cheapest price. More bang for your buck. 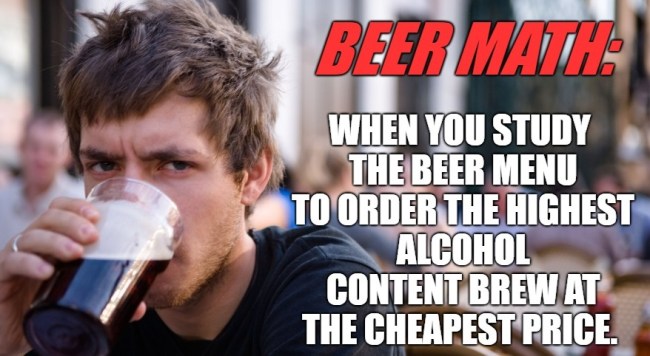 For lunch I drank a Pilsner from Breakside Brewery in Portland which paired nicely with a chicken biscuit sandwich at Pine State Biscuits (highly recommend both the biscuits and the beer!) They say “Keep Portland Weird” and wonderfully weird is exactly how things got as I went brewery hopping to some Oregon gems. 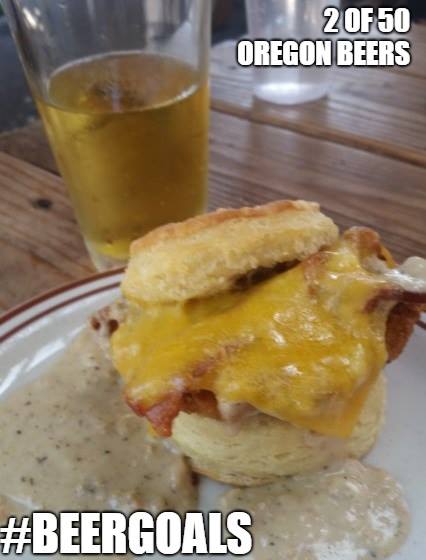 Next door to The Freakybuttrue Peculiarium and Museum featuring a life-sized Big Foot, a Krampus and alien dissections, was McMenamins 23rd Ave Bottle Shop. There, I kicked things off with my first full flight of the trip including a Ruby Ale with delicious hints of raspberry it was fruity and light and sat on my palate nicely.

I could drink this all day, but powered through. Another highlight was the Terminator Stout which I drank like it was opening day of “Terminator 2” in 1991. I love a good stout and yes, “I’ll be back.” If you are like me and don’t like a super bitter beer, you can power through a 30 IBU no problem, this stout totally works unlike Terminator: Genysis.

McMenamins is a great, established Oregon brewer. I later visited their McMenamins Kennedy School, which is an old elementary school building where in addition to hotel rooms, they converted classrooms into different themed-bars. There’s a Boiler Room Bar, The Detention Bar and they even brew beers on site in the old girl’s bathroom. And to think someone used to get yelled at for smoking in there.

I enjoyed another McMenamins flight, a highlight of which was the Shady’s Back Whiskey Stout that could put some hair on your chest or at least warm it up. 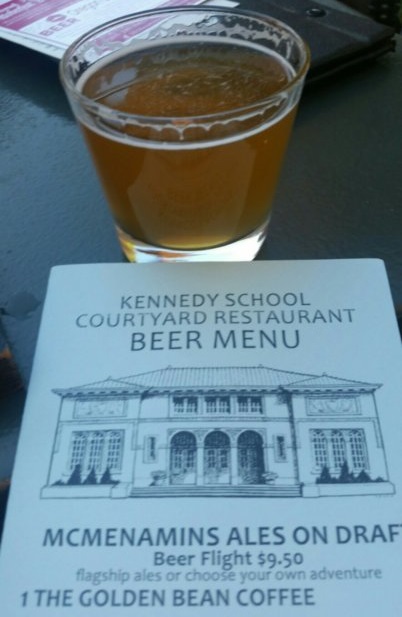 In preparing for my Beer Goals Oregon trip I did a lot of research and one brew joint, Hopworks Urban Brewery stood out for it’s incredible 15 beer taster flight at a reasonable $13.

The only down side to such a large flight is that is HELL to eat with me. I sit busily capturing and reviewing each beer for the Beer Goals Facebook page, but it is worth it for the beer. A standout from Hopworks was the Ferocious Citrus IPA that had a light, delicious fruit taste, but not overpowering. It paired nicely with the other 14 beers I drank. 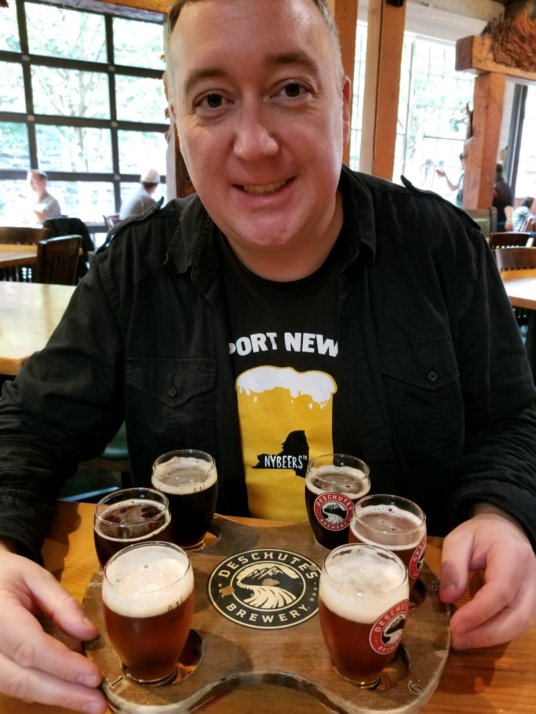 In Portland I hit up Great Notion Brewing, and Migration Brewing, but my favorite had to be visiting Deschutes Brewery where I got to try some exclusive in house only brews in their awesome restaurant. A highlight was the Mountain Skyline, a malty 9 % ABV choice, with a really good nose on it.

Around the city I also made sure to visit Portland Brewing where I was rewarded with some sizeable tasters! Their Ink and Roses IPA was a favorite in my mouth. 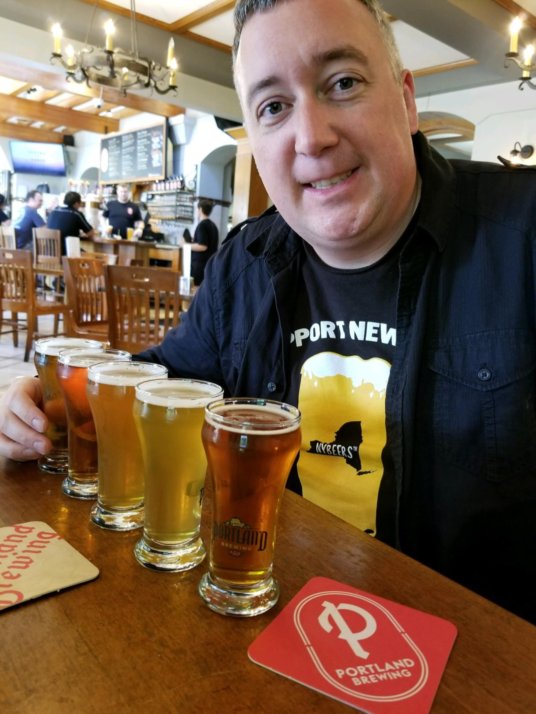 The next stops were up the coast, stopping to have a delicious Multiporter Smoked Porter from Mount Hood Brewing, at the foot of Mount Hood in the Timberline Lodge where they filmed the exteriors of the classic film The Shining. My only disappointment is they did not have a rum barrel aged beer called “Red Rum, Red Rum.”

Full Sail Brewing in Hood River, Oregon was one of my favorite breweries. In addition to having a delicious Blood Orange Wheat (I’m a sucker for orange flavored wheat beers) and a knock out 10.3 % ABV Wassail Bourbon Aged, they have this cool flight that is in the shape of a sail.

Get it? They are Full Sail Brewing? It took me a moment. 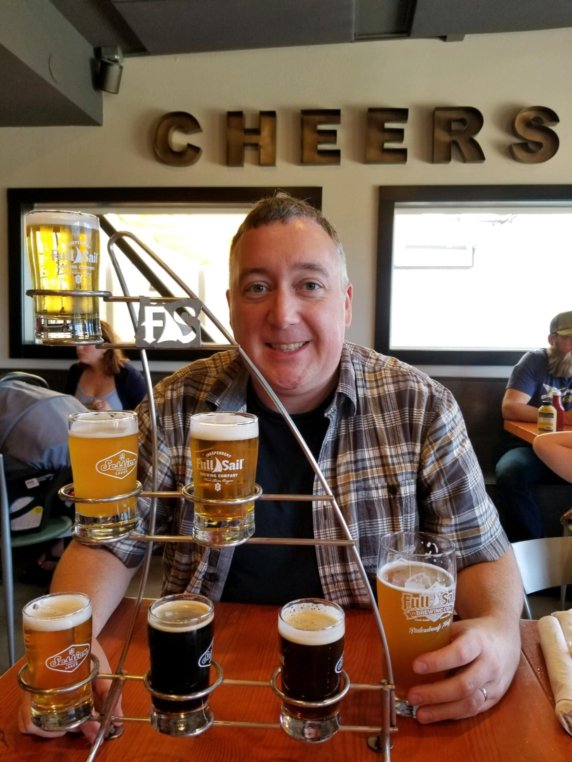 Another highlight was Public Coast Brewing in Cannon Beach, Oregon where a six-taster flight paired well with some buffalo chicken. A standout for this brewery had to be their unique Guava Sour. While sours are an acquired taste, I will gladly pucker up for one that is done right.

And what would a Oregon beer trip be without drinking a Rogue Ales, beer? I enjoyed a 7 Hop IPA out of a Rogue tent at the famous Portland Saturday Market — weirdly, on a Sunday. It was strangely refreshing with the right number of hops.

While I found some great beers, for my next trip I will be crowd sourcing which beers from every state I should try. So please share a list of local beers you love in your area. 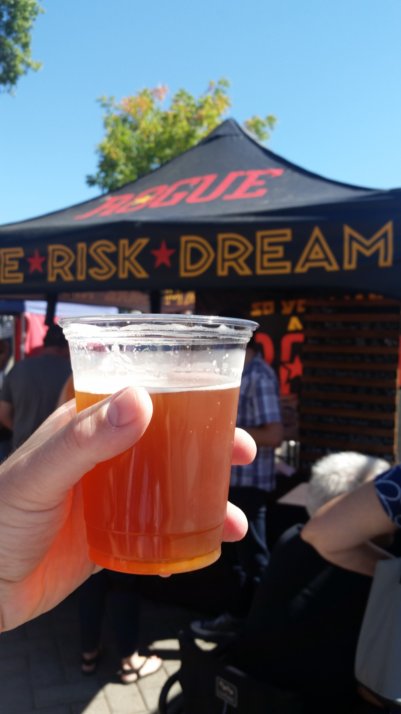