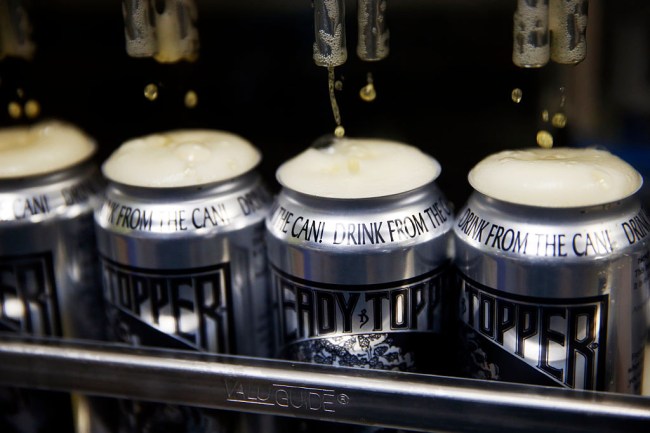 I spent the first couple of years of college subsisting almost exclusively on vodka packaged in plastic handles and cans of beer from whatever 30-rack the upperclassman who charged me $5 more than it cost him happened to pick up at the liquor store.

However, every once and a while, I decided to splurge a bit to get my hands on some of the nice stuff. Now, it’s worth noting this was around ten years ago and I was still relatively broke so I considered a six-pack of Boston Lager a luxury, but there was no better way to feel like a king in a freshman dorm than to stunt on everyone by drinking beer from a bottle.

I don’t want to suggest glass was a necessarily a status symbol, as bottles were the vehicle of choice until cans burst onto the scene in the 1930s, and since then, most of the world’s biggest brewers have given drinkers a choice when it comes to picking what vehicle they want to use to imbibe.

However, for a long time, fans of craft beer essentially had two choices: a glass bottle or the glass they poured its contents into (the one major exception was Oskar Blues, which first canned Dale’s Pale Ale in 2002). As a result, people associated glass with good beer and I know I’m not the only one out there who subsequently assumed that meant bottles must be the superior form of packaging.

By now, the almost-universal consensus is that cans are actually the objectively better option, as they’re not just more transportable but also block out light that can degrade the valuable nectar sealed inside. Oskar Blues was certainly ahead of the curve but many of the other microbreweries that helped usher in the revolution the industry has experienced over the past decade or so took things one step further by introducing the now-ubiquitous 16-ounce cans.

Once reserved for the likes of Coors Banquet and Narragansett, tallboys were eventually welcomed with open arms by the craft beer community and eventually became the movement’s new status symbol, and nowadays, the true mark of a beer nerd is dropping $22 on a four-pack without batting an eye.

The rise in popularity of 16 oz. cans led to some producers facing a shortage in 2015, and five years later, it appears there could be another one on the horizon during a time when the last thing the industry needs is another fucking headache to deal with.

There’s no telling what the craft beer landscape will look like on the off-chance the world ever returns to a semi-normal state, but if it does, it will be absent of a significant number of breweries that were operating before everything went to shit. Now, the ones that are still hanging on may have trouble moving their product, as the CEO of a Texas-based canning company recently said there simply isn’t enough aluminum to go around.

There are a few factors in play here, as the hard seltzer boom has increased demand, people are buying more packaged beer with no bars to go to, and the beverage industry as a whole (including purveyors of non-alcoholic drinks) is pivoting to metal packaging. As is the case with everything in life, those with more money tend to get preferential treatment, so while big breweries don’t have much to worry about, their smaller competitors have a bit more reason to be concerned.

It might not be an ideal solution, but just hear me out: craft beer 40s. Who needs Steel Reserve when you can invest in a double dry-hopped triple New England IPA instead? I don’t see what could go wrong.