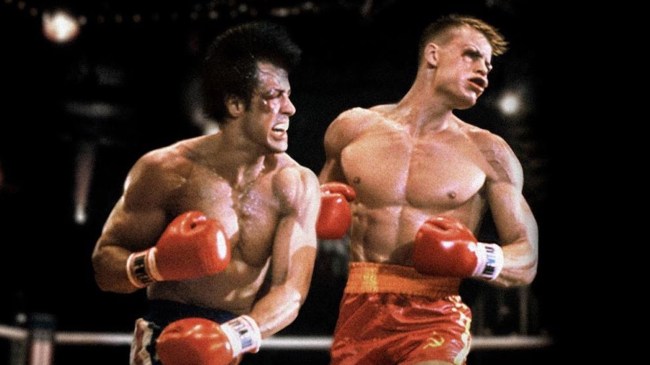 I really need to pay closer attention to my heroes’ social media accounts because I totally missed Sylvester Stallone sharing on Instagram a couple of days ago a deleted scene from Creed 2 where Rocky Balboa and Ivan Drago get into another fight. WHAT?!

How…? How was this long-awaited second Rocky vs. Drago fight cut from the movie?!

According to Stallone, “This was an early rehearsal for a short fight ROCKY was suppose to have with DRAGO in CREED 2. It took place in the hospital just after Adonis had been terribly beaten by Drago’s son… Adonis is in much pain and tells me to leave … Drago And the promoter show up with filmcrew! They were planning on going upstairs to harass the beaten fighter but ROCKY stops them!!! It would’ve been extraordinary! But regretfully it was cut … Pity … #rockybalboa1976.”

It would’ve been extraordinary? NO KIDDING, SLY!

First, you tell us that Apollo Creed’s ghost almost appeared in Creed 2 and now this?! Man…

There was also supposed to be a scene in the movie involving Ivan Drago that Dolph Lundgren revealed back in November that was cut that sounds like it too would have been tremendous.

Fred Topel of SlashFilm asked Lundgren, “Do you think Ivan has any remorse for killing a man in the ring?”

He has, lots. He had remorse for it and I think the way it was described in the script is that he does tell Rocky, “I did not mean for your friend to die.” That line was taken out but I think he had remorse. He was a young man and obviously had to sort of take the blame off himself, a natural reaction. You want to blame other people, especially for something painful. So he blames it on Apollo, Apollo was just not strong enough to survive. You get in the ring in boxing, you get hurt, you get hurt. I think that’s how Drago thinks about it but I think inside he’s sorry about it. At the end there was a scene where me and Rocky kind of make up and I also make amends with Adonis for his father. There was a locker room scene that is not in the picture. I don’t know if it was too soft or it was too much maybe, or maybe it’s left for Creed III. I don’t know.

They even filmed it!

Yes, it was shot and it’s very emotional. At the end, after the fight, Adonis and Rocky are walking back and they see Ivan taking the wraps off his son’s hands and kind of comforting him. He’s feeling bad for losing. I leave the room and Adonis walks in and talks to my son. I come back in and we have a moment, me and Adonis, and then I have a moment with Rocky after that. That was taken off. Maybe it was too much or maybe it was too emotional or too soft. Maybe redemption comes next time around.

Okay, listen, I enjoyed Creed 2. Not as much as the first Creed, but it was okay. It didn’t make me want to run out and buy it or anything like the first one did.

Now, though, even with the final cut already being two hours and 10 minutes long, it sounds like it could have been a whole hell of a lot better. I know I would have had no problem sitting there for another 20 minutes or so to see these scenes that were cut.

Maybe they could have cut some of Adonis punching water while submerged in a pool or something to make some room.