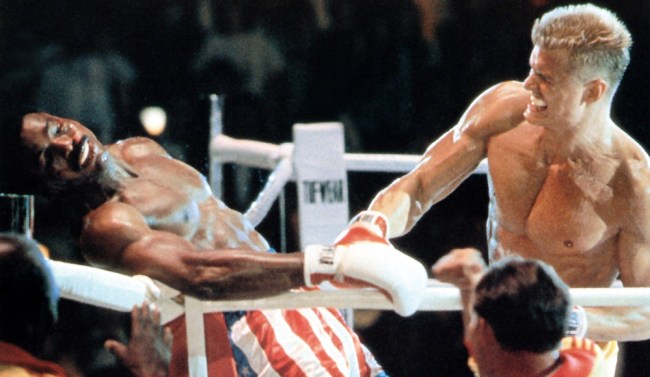 In what would have been a very unique and possibly interesting move, Sylvester Stallone apparently wanted the ghost of the dearly-departed Apollo Creed to appear in Creed II.

But, spoiler, it didn’t happen and the film’s director Steven Caple Jr. explained why.

Speaking to Business Insider as the film as its about to hit theaters, Caple explained the thought process behind not having Apollo Creed’s ghost show up in the movie.

The idea Stallone had was that while Adonis Creed (Michael B. Jordan) is recovering in the hospital from his first fight with Viktor Drago (Florian Munteanu), for a brief moment while in and out of consciousness he would see his father, Apollo, standing in the corner of the room.

“In regards to tone, it wasn’t on my level of where I was going with the film,” Caple said. “Sly had it in just as an idea we could use, but I thought it might throw people off. And then I was thinking what does Apollo wear? Is it [actor] Carl Weathers today or from back in Rocky IV?”

Caple did come up with another way to get Carl Weathers and Apollo Creed involved in Creed II, but that too ended up not sitting right with him.

Caple felt at a key point in the final fight, while Creed is trying to get up off the canvas, he would hear his father’s voice say, “Get up, son.”

“I felt that was going to be the moment,” Caple said. He was going to have Weathers come in to deliver the dramatic line. But when he edited the scene and included the line (which at that point was recorded by someone else as temporary dialogue) it didn’t work.

“It just felt like it came out of nowhere,” Caple said. “At that point it’s his own family that’s making him get up, not his father anymore.”

Not that Apollo Creed won’t appear in Creed II, it will just be in archival footage from Rocky IV.