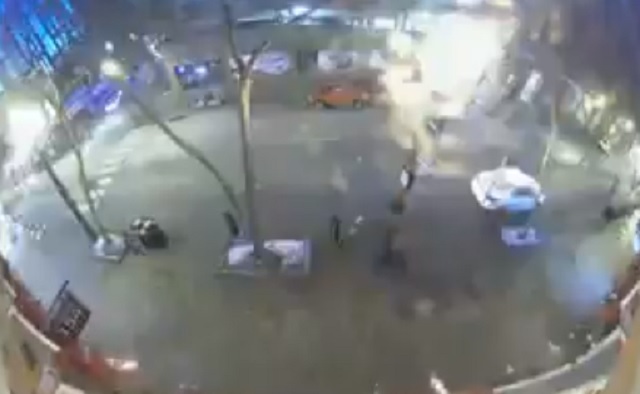 Something strange and scary went down in downtown Nashville on Christmas day. On Friday morning, a large explosion that is being called an “intentional act” went off in Nashville injuring three people and causing damage to several buildings in the surrounding area.

Authorities believe an explosion that occurred in downtown early Christmas morning, rattling residents for miles, was an “intentional act” sparked by a vehicle.

Police were responding to reports of shots fired near Second Avenue and Commerce Street before 6 a.m. when they saw a suspicious vehicle outside a nearby AT&T building.

Officers alerted the department’s bomb squad, which was en route, when a “significant explosion” happened about 30 minutes later, Metro police spokesperson Don Aaron said. The force of the explosion knocked an officer to the ground.

Three people were hospitalized with injuries, police said. At least 20 buildings were damaged, Nashville Mayor John Cooper said. It was unclear if anyone was inside the RV when it exploded.

According to witnesses on the scene said they heard a message coming from an RV parked in the street warning anyone in the area to evacuate. That message could be heard in a surveillance video uploaded to Youtube.

We just spoke with a restaurant owner whose place is decimated — allegedly the building owner said there were gunshots, and then a PA system counted down saying the RV was going to explode in 15 minutes and people should evacuate…

The aftermath of the bombing is pretty unnerving.

Footage from the scene on 2nd Ave North as multiple agencies continue to work and investigate an explosion from earlier this morning. pic.twitter.com/5g40RhwNNl

#UPDATE
NEW IMAGE FROM THE EXPLOSION NEAR BROADWAY IN NASHVILLE
📸: @NashvilleFD pic.twitter.com/GqWrwQjJce

Update: this is the RV in question that police are looking for.

BREAKING: This is the RV that exploded on 2nd Ave N this morning. It arrived on 2nd Ave at 1:22 a.m. Have you seen this vehicle in our area or do you have information about it? Please contact us via Crime Stoppers at 615-742-7463 or online via https://t.co/dVGS7o0m4v. @ATFHQ pic.twitter.com/JNx9sDinAH