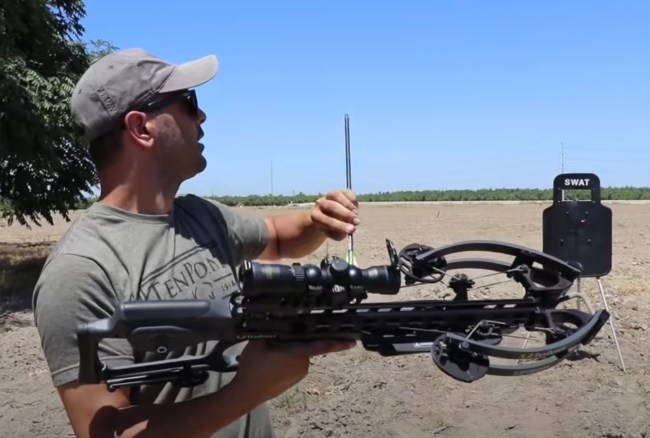 I guess I’ve always assumed that a SWAT shield is virtually indestructible. A quick search on Google shows they run anywhere from $820 on up to a few thousand dollars. For a few grand and something that’s built specifically to keep elite police forces alive I’d suspect that it could stop arrows. Am I right? We’ll find out.

I won’t keep you in suspense here. The shield does a pretty decent job at stopping most of the arrows but it’s pretty obvious that if you were holding that shield and someone shot an arrow from a powerful crossbow at you then you’d be screwed.

We recently saw YouTuber Edwin Sarkissian in a video where he tested an elite bomb suit against an M67 frag grenade and he’s back now to test how the SWAT shield stops arrows. He fires arrows from a series of different bows as well as the crossbow and all of them do more damage than I ever would’ve expected.

I absolutely love the idea that this dude’s out here during the past few months of nationwide isolation getting to just play around with some of the coolest weapons on the planet and making BANK thanks to his 2.73 million YouTube subscribers. I’m thinking about what it would be like for him to go back in time and try to explain his job to someone from 1890.

I’ve got a neighbor on the local SWAT team. I won’t name names/call out the specific city but I half want to message him this video on Facebook right now and tell him they need to speak to the manufacturer and get some better shields. If that thing can’t stop arrows from making it half a foot through the shield, what else are they unable to stop??

By the way, if you haven’t watch that video where Edwin Sarkissian tests the M67 Frag Grenade against a Bomb Suit then you can check that out right here because it’s pretty damn good.

It’s blowing my mind that someone out there gets PAID to make awesome videos like this.