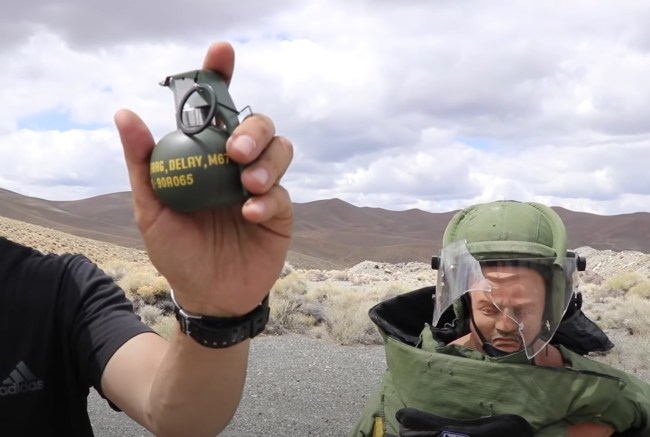 I was today years old when I discovered that a bomb suit costs around $30,000. The common EO9 (Explosive Ordnance Disposal) Bomb Suit runs just shy of $28K and for that price you’d think it would provide some measure of protection, wouldn’t you? I’m not sure which specific bomb suit this is but in the video Edwin Sarkissian references the bomb suit costing $30K so I’m led to believe they’re one in the same.

I feel a bit like Lucile Bluth in Arrested Development here having absolutely no idea how much items cost but I wouldn’t suspect this suit would sell for thirty grand when it clearly doesn’t perform the task it was designed to do. It’s also pretty interesting to recognize that a YouTuber with 2.71 million subscribers can either afford to blow one of these up on a whim or has access to just set a $30K suit on fire, which is pretty much what he did.

The heat given off by the M67 fragmentation grenade is intense. It’s also remarkable to see how many random bullets he pulls out of the dummy after the explosion. I think by now you’ve realized that the suit doesn’t stand a chance. The explosion in this video doesn’t start until around the 3:30 mark if you wanted to skip ahead to the action:

Perhaps the most surprising aspect of this experiment to me is that they never used Buster on MythBusters to test this myth. They put Buster through every experiment on the planet while constantly working with explosions on MythBusters but I can’t recall a time they ever decided to specifically blow Buster up to see if the protective equipment worked.

Side note, if you’ve ever wondered what a grenade does to a propane tank then Edwin’s got you covered with this other video:

This clip from the Science Channel goes into the science of how bomb suits actually work, if you’re curious about how the flexibility works to stop a bomb:

It doesn’t really work all that well though, does it?