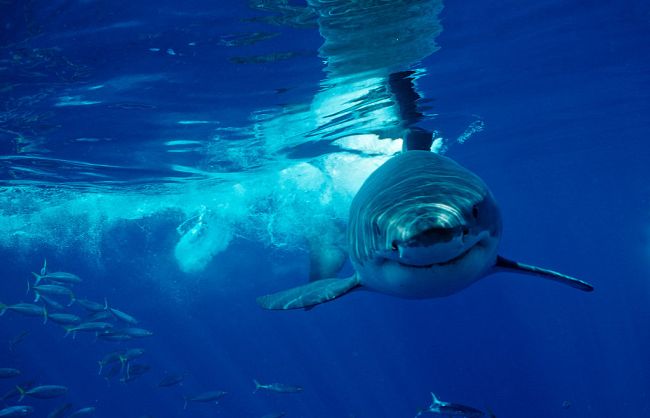 A cruise passenger died after a fatal shark attack. During a cruise stop in the Bahamas, a Royal Caribbean cruise ship passenger from Pennsylvania was killed during a deadly shark attack.

WDJT reported, “While the cruise ship was docked in Nassau, the family booked an excursion with a local tour company that took them to a popular snorkeling area, she said.”

A 58-year-old woman who was a passenger on a Royal Caribbean cruise ship to the Bahamas was mauled to death near Green Cay, in the northern Bahamas near Rose Island, according to CBS News.

Around 2 p.m. on Tuesday, the cruise passenger on the Harmony of the Seas cruise ship was killed while being attacked during “an independent shore excursion,” a Royal Caribbean cruise line spokesperson said.

The victim suffered bites to her “upper extremities,” according to police spokesperson Chief Superintendent Chrislyn Skippings.

Newsweek reported, “The woman’s family members saw the attack happen with a tour operator. They pulled her from the water and rushed her to hospital where she was treated for injuries to her upper body, but she eventually died from her injuries, Skippings said at a news conference. The snorkeling area was immediately closed to other swimmers.”

Skippings said that the victim was killed by a bull shark, and it was an “unfortunate situation.”

CBS News reported, “The woman has not been identified publicly by authorities, but Gannon University, a private Catholic school in Erie, Pennsylvania, identified her as alumna and current university employee Caroline DiPlacido. The university said she was the project coordinator for the Office of Community and Government Relations on the Erie campus.”

According to CNN, “Operators from the tour company and family members were able the pull the woman onto the boat and rushed to the nearest dock, where paramedics responded and reported no vital signs of life, Skippings said.”

“The species prefer shallow coastal waters, meaning they will sometimes come into conflict with humans who are swimming,” Newsweek reported. “They have been known to attack people inadvertently or out of curiosity, however, attacks are rare.”

There have reportedly been 33 unprovoked attacks recorded in the Bahamas since 1580. The most recent attack occurred in 2018.

“Despite their aggressive reputation, scientists believe bull sharks only approach humans out of curiosity,” Newsweek reported. “Attacks may occur when they feel threatened in some way.”

Based on worldwide statistics, there were 73 unprovoked shark attacks in 2021 – 9 of which were fatal.

“Royal Caribbean is providing support and assistance to the guest’s loved ones during this difficult time,” a statement from the cruise line said. Harmony of the Seas is currently on a seven-night cruise after sailing from Port Canaveral, Florida, on Sunday.