3,700 People Are Forbidden From Leaving A Cruise Ship In Japan Where A Passenger Tested Positive For Coronavirus 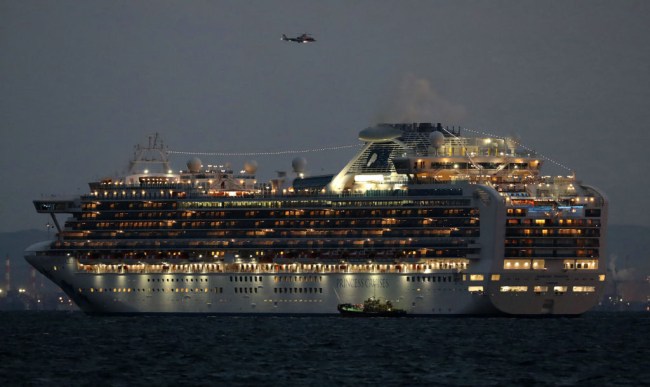 Five years ago, the Western Hemisphere collectively lost its shit as the Zika virus started making the rounds but it appeared we were going to be able to make it out of the decade without having to deal with another global freakout concerning a potential pandemic until China decided to ring in 2020 by introducing the world to an untreatable strain of coronavirus.

After previously serving as the epicenter for SARS and bird flu (the latter of which is also apparently making a comeback because the world apparently doesn’t have enough shit on its plate already), the country has once again found itself in the news for all of the wrong reasons after a number of people became infected with coronavirus after visiting a food market with a reputation for selling animals known to transmit the disease.

Last month, China informed the World Health Organization that multiple people in the city of Wuhan had been diagnosed with a mysterious respiratory illness and things quickly began to spiral out of control from there.

A few weeks into January, videos began to circulate showing the chaos in Wuhan, a city of 11 million people that was eventually put on lockdown to help stop the virus from spreading (but not before 5 million residents managed to leave).

Now, cases have been reported in countries around the world and scientists have confirmed it has the ability to transmit from person to person as people rush to pharmacies to buy masks and hole up in their homes watching Contagion in the hope this will all blow over soon.

Multiple airlines have already suspended flights to and from China and plenty of people who made travel plans have been forced to rethink them but that doesn’t include the 2,666 cruise ship passengers currently stranded in Japan who are probably regretting their decision to not cancel their trip.

Last week, 6,000 people were forced to remain on a luxury liner in Italy after a Chinese passenger showed symptoms of coronavirus but were eventually allowed to leave after it was determined she merely had the flu.

However, according to USA Today, the 3,711 passengers and staff members aboard the Diamond Princess aren’t so lucky, as they’re currently confined to their quarters in the waters of Yokohama as officials screen everyone on the ship for coronavirus symptoms after a passenger tested positive.

Officials say they expect to allow people to begin to disembark on Tuesday night to allow them to reenter a world where almost 20,000 people are currently infected with a disease that already has a higher death toll than the SARS scare.

At least humanity was fun while it lasted.